And Other SA Kiting Events

The Adelaide International Kite Festival is the biggest local event involving kite flying. Sometimes, other events in our state of South Australia also involve the flying of kites.

For quite a few years, I documented many of these events in some detail. I hope you enjoy the body of work below. You will learn a lot about kites large and small if you wade in :-)

Monthly local kite-club activity has always been documented via 300-word blog posts—and it's all archived here, collated by year. 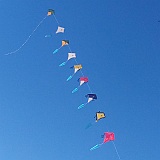 And since 2016, other miscellaneous Adelaide events involving kites were also  the subject of those 300-word blog posts. Naturally, they are archived here as well.

You will come across plenty of photos plus video in many of the links from this page. That's not to mention info-packed commentary and personal anecdotes of the experiences.

Back to the big international festival... Each year (barring pandemics), to the south of the jetty, the public are invited to fly their own kites. A few people would be flying homemade kites, including my family of course! That's (part of) my longest kite train in the photo.

The photo further down features two kites, which for several years were a constant at the Adelaide festival held at Semaphore. That large UFO kite in the background, near the lower edge of the photo, has in the past doubled as a shelter for the commentator. And that magnificent killer-whale kite used to be one of the very first things that caught your eye as you approached the kite festival on foot!

Here are some links in date order, with the most recent events first:

At the kite festival in March/April of 2018 the best flying occurred in the afternoon of all three days. On Monday however, the wind strength became quite fresh. Most kites were not far from the upper end of their wind range. Mayhem sometimes resulted!

Like the previous year's event, the international kite festival in Adelaide during April 2017 had two brilliant weather days and one not-so-good but flyable day. Also in 2017, the club was invited to fly at the Sandbar Golf Classic, where the greens were sandy brown!

The large town of Murray Bridge held its own festival, right at the end of April 2016. We took photos and video as usual.

Over the Easter weekend in March 2016, the Adelaide festival was again a great success. It was aided by the almost perfect weather on Saturday and Monday afternoon. Sunday was OK for very good light-wind kites!

Timed for mid-week during school holidays in October 2015, Aren and I attended Kites, Bikes and Picnics. Mainly small kids and small kites were being targeted by a local kite business. But a few of us AKFA members weren't going to miss out on any sort of kiting action, naturally!

Saturday the 4th of April 2015 saw an almost dead-calm early morning turn into an ideal afternoon for the Adelaide kite festival. Having recently become a member of AKFA (Adelaide Kite Flyers Association), I registered to become an official participant this time—mixing it with the huge kites north of the jetty.

On Sunday the 12th of October 2014, AKFA (our local association) put on an All Ages Come and Try Kite Flying Day. I turned up on my own this time, being the only real kite nut in the family! It was a great day, with several hundred people passing though and many of them putting up a kite or two. I later did some kite aerial photography (KAP), suspending the camera about 250 feet over the sand, under our big Fresh Wind Barn Door kite.

During April 2014 we attended all three days of the event, from the 19th through to the 21st. That was two afternoons and a morning, which had markedly different weather on each occasion! We were basically observers for the Saturday, then got the huge Multi-Dowel Sled up on the Sunday with very light winds. Finally, we had a blast with the Peter Powell Sky Stunter MkIII on the windy Monday morning. 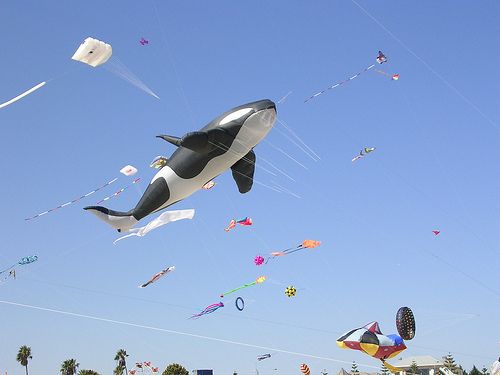 On the last Saturday in March 2013 we attended the festival for the sixth time. Winds were generally light but freshened to gentle strengths around 18 kph at times. We gave our digital camera a workout, snapping more than 100 images. Photos were mainly of the action south of the jetty, where anyone could fly a kite.

Easter fell in April 2012 so that was the weekend of the kite festival. Winds went light to fresh and back again during the course of one afternoon, thus catering for every single kite out there—at least for a while! The event seemed more crowded than in most previous years.

In March 2011, we attended the Adelaide festival just for the Saturday afternoon on the 26th. However, we got good photos of nearly everything that was sent aloft that day! This didn't include the kites in the public flying area, though. Around midday the sky was fairly overcast, but it cleared up considerably by 5 pm. There was plenty of sunlight for good kite photos! The wind ranged all the way from light to fresh, but all kites got plenty of air time.

In March 2010, we turned up at Semaphore without confirming that the festival was actually on. It wasn't :-( Anyway, 4-year-old Aren had a great time watching the forklifts at work on the jetty, which was being renovated. This was the reason for the cancellation of the festival.

A few other families were flying small kites on the beach nearby. Perhaps they were in the same boat as us! We flew the 1-Skewer Delta for a while, before it eventually hit the water, just 1 meter (3 feet) from safety. Covered in salty water, bits of seaweed, and sand, the delta suddenly became 20 times heavier. For a while after that, its flying characteristics were somewhat similar to that of a house brick.

In March 2009, we discovered that we still wanted more from our digital camera! Never-the-less, we came away with a heap of great imagery. We dropped in on the Adelaide festival venue on the Friday and Saturday.


In March 2008, and armed with a better digital camera than in 2007, we attended the Adelaide festival on three separate days. As usual, a highlight was the Rokkaku Challenge! We took plenty of photos and videos over the weekend.

August 2007 was when Windjam07 grabbed some media attention. The Scouts broke the world record for the greatest number of kites flying at once! It was a warm cloudy day with barely enough wind to keep the kites up, down at Glenelg Beach. Adelaide events involving kites are usually down at a beach somewhere, within a half-hour drive from the city center.

In March 2007, we first covered the Adelaide International kite festival with a long rambling account of everything we experienced. We were there for a few hours on just the Saturday.

Besides the Kite Festival
Other Adelaide Kiting Events

You might not be from Adelaide, South Australia, but ... over several years I blogged the local monthly kite-fly days of the Adelaide Kite Flyers Association (AKFA).

AKFA also gets invited to various other kiting events in and around Adelaide. Over the same time period, we blogged and archived these too.

The page links below catalog all these local kite-flying activities. Read about all kinds of kites, flying in all kinds of weather. And perhaps pick up a small pointer here and there.

Missing months are mostly due to bad weather and sometimes because the day happened to be Mother's Day as well!  The pages below contain quite a slab of anecdotes of typical South Australian club kite-flying :-) I think you'll enjoy the photo galleries too:

Regarding those "other Adelaide kiting events"—they can be found under the last link up there.