Lots of Parafoils, Lots of People

Great weather was a bonus this year, at the Adelaide Kite Festival 2012. This time there was a larger than ever assortment of flat single-line parafoils. The bright solid colors suited them better than fancy graphics since they lacked the conveniently flat canvas of most sticked kites.

Some of the parafoils looked distinctly sled-like with one large keel at each wingtip. In fact, at one point it seemed that the commentator actually referred to them as "sleds." I won't get into an argument about definitions here though.

The photo down there, giving an overall impression of the Adelaide Kite Festival 2012, is the only one on this page. It was selected because almost every type of kite and windsock flying in the official area north of the jetty is represented:

Yes, that's Aren next to me, and I have no idea what he was pointing at. Perhaps it was a "parachuting teddy" about to pull the ripcord!

Apart from the photo, my approach this time is to feature 16 quite short (5-second) movie clips. Plus there's a longer and larger panoramic clip right down at the bottom of this page. There is no particular theme or selection criteria—they just aim to give you a good impression of what went on. Some are closeup; others fit many kites into the viewfinder. 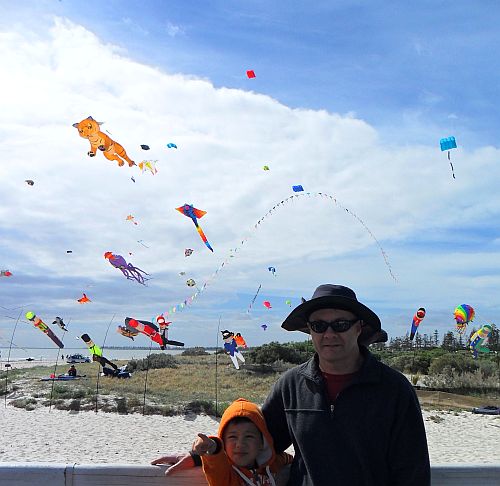 These clips were selected and extracted from over 40 short digicam movies. I hope you enjoy these highlights! They were taken over the Saturday and Sunday afternoons in the order in which they appear.


The wind strength was fairly light around the middle of the day, but strengthened to quite fresh for a short period in mid-afternoon. This increase made a noticeable difference for the largest kites, powering them up much higher.

Impressive kite arch of small diamonds, which snaked around and stayed up there for ages.

Definitely a humorous feast for the eyes, this scuttling crab inflatable! Quite a large kite too.

This frill-necked lizard was a standout among the big inflatables. Large and yet exquisite.

A quad-line stunt kite does its thing among the single-line scenery all around. I'm not a stunter man, but it's probably a Rev.

Ready for more hilarity? These inflatable MnMs (!) have stabilizing structures below them, cleverly disguised as legs. The short arms are purely for looks, I'd say.

The famous parachuting teddy! Play/pause your way through this release/inflation sequence. He bangs out like a fighter pilot who's pulled the eject handle.

With the wind blowing in from the west on this day, most of the kite lines in the official area were lined up with the jetty. This kept the kites much closer to the jetty than on Saturday—convenient for everyone capturing the Adelaide Kite Festival 2012 with their digital cameras and video gear.

Another view of the long kite arch of small diamonds. This time, few other kites are in the picture.

In previous years, the biggest and most striking kite was probably the killer whale. But now it has been eclipsed by the large and long blue whale!

A Peter Lynn manta-ray inflatable. Eye-catching from a long way off due to the splashes of color and the long tail.

Watch this quad-line stunt kite expertly swoop around against a backdrop of big single-liners and line laundry.

We Aussies are less inclined than some to put our flag on things. This Aussie flag delta (top-right of center) is an exception.

I managed to get myself right in the path of a lolly drop. One of many on the day. With my free hand, I managed to snag one of these lollies (candy) for my 6-year-old Aren.

The traditional Adelaide Kite Festival rok battle. Most of the little white rokkaku fighters are in the frame. Each was painted with a number, in both Japanese and English.

Panorama From the End of the Jetty

There they all are. This footage of the Adelaide Kite Festival 2012, showing almost all of the "official" kite cloud, was taken on Saturday afternoon. My wife liked the Tasmanian-devil windsock, while I preferred the two nice big high-tech Cody kites. And as for Aren—he loved the lolly drops of course!