The Adelaide Kite Festival 2017 has been and gone. What a huge event it was this year! The weather played a major role, providing ideal winds on the first two days. The location? It was Semaphore Beach as usual for this annual South Australian event. 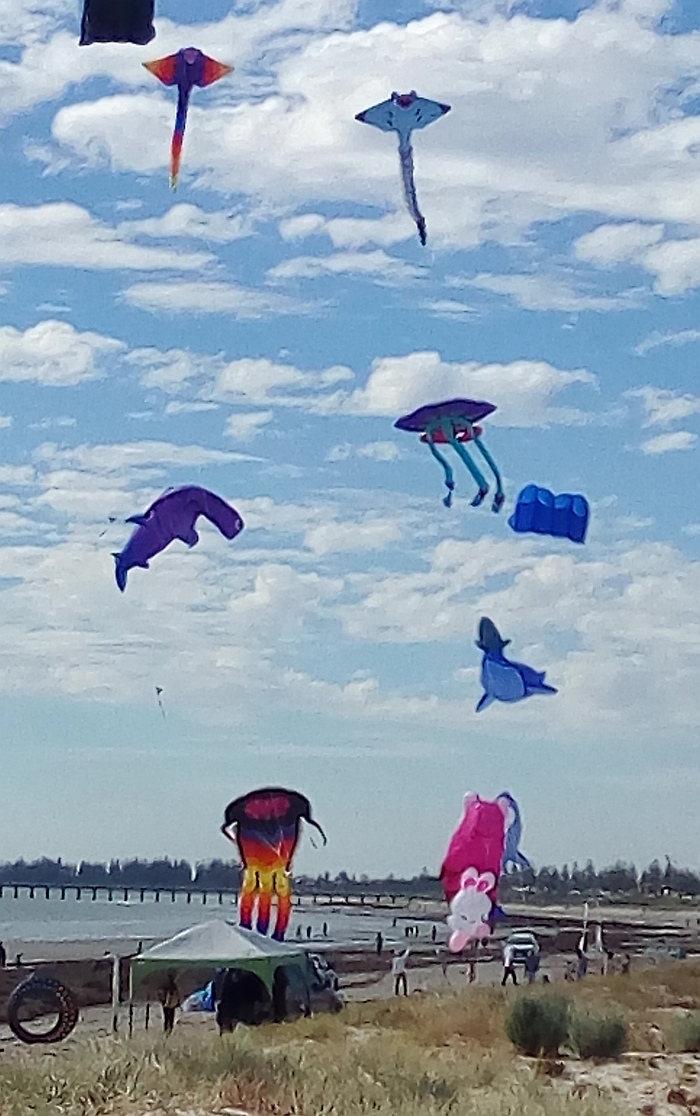 Northern end of the display, on Saturday.

The last day, Monday, saw more difficult conditions due to intermittent and very light breezes. That's what you sometimes get when it's offshore. But at least the day was flyable most of the time.

And oh yes—there was also a 180-degree wind shift thrown into the mix! Thicker cloud cover resulted in much less direct sunlight than on the previous days of the festival.

Many spanking-new inflatable show-kites were aloft on all three days of the Adelaide Kite Festival 2017. Yep, even on Monday. Modern inflatables can fly in lighter winds than ever, thanks to advances in kiting technology.

Here's a list of just three of the main attractions:

The list could go on for much longer. Plenty of kiting quantity and quality was on show!

The three photos below are used with permission from photographer and fellow Adelaide Kite Flyers Association member Mark Hamilton.

Click or tap on a photo to start the viewer.

Regarding all the images in this section—just click or tap any photo to start the gallery viewer. You'll see.

The first group of photos are landscape orientation—wider than they are tall, that is. Many of these capture the "floating circus" atmosphere of the festival.

The second group of photos are all portrait orientation. That is, they are taller than wide. In the middle of these are some kite-train images, followed by a focus on individual kites we found interesting. 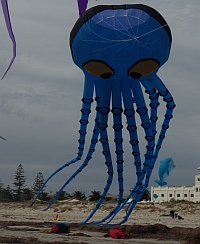 Have you ever sat in a tent while it was tickled by the fat tentacles of a gargantuan octopus? It was an experience, let me tell you.

The breeze had dropped right out, and one of the latest Peter Lynn inflatables had descended low over the sand. It kept us busy for a minute or two, freeing ripstop tentacle suckers from snag points on our director's chairs and the tent.

Looking back, the situation was less dangerous than being near the flying line of the same kite, but still—it raised the heart rate a little! 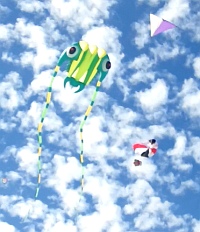 Besides the time-honored entertainment of raising a bag of sweets and dropping them over the public-area sand, another kite messenger was in operation. This one was employed to raise a ... parachuting teddy.

See in the photo, the triangular kite messenger, the green-and-yellow trilobite lifter kite and the deploying stripey parachute. The teddy itself is just a brown blob at this scale, having been dropped a second or so earlier.

Again and again, the intrepid soft toy popped its 'chute and drifted to the sand - right next to our tent.

Naturally, our 11-year-old boy couldn't resist trying to catch the teddy before it hit the sand. Once or twice, he succeeded. Having raced up and back across the soft sand many times, his knees started to give out... About 50 years too early, wouldn't you say. Anyway, Aren's retriever role certainly saved a lot of effort for the owner of the teddy-dropping gear! 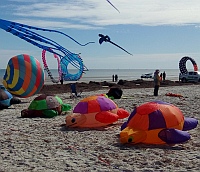 What? Who's blowing leaves off the beach at the Adelaide Kite Festival 2017?! The whine of a leaf-blower came to our attention.

OH—it's just an AKFA member inflating turtle wind-art the 21st-century way! It was quite convenient in the very-light-wind conditions. There the turtles are in the photo.

And later, a large inflatable kite got the same treatment. If it works well, do it! 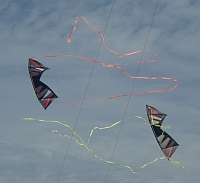 The Phoenix Kite Collective put on a wonderful show with their Re... ooops I mean Phoenix 4-line stunt kites. I only heard one CLACK as two kites collided—bringing a small cheer from the crowd!

To the pilots' credit, the routine was not interrupted at all. Both kites completed the routine as if nothing had happened. Rough air tumbling across from the crowded jetty made things difficult for the kite team when flying low over the sand.

In the photo over there, two Phoenix stunt kites have just reversed direction—as you can tell by the tails folding back on themselves. 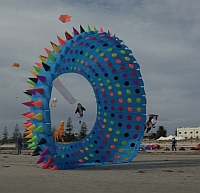 I didn't see it happen, but someone else was talking about how the largest Bol "kite" had got away, only to collapse just a few meters further down the beach, thankfully. These large circular contraptions remain in contact with the ground most or much of the time, depending on wind speed.

Apparently, people watched as a carabiner in the bridle slowly elongated and then failed! Lots of fabric means lots of pull.

Although I only spotted it happening once, several public-area kites would lose their moorings and come drifting over the jetty each day. These were duly scooped up, snapped off their lines, and placed in a neat row on the sand, near the jetty.

The idea was to let people claim their kite and get it back—minus the flying line. Why did it happen? My guess is that:

Manja! I've noticed that people with Indian background are probably the most enthusiastic and skillful flyers among the public at this event. However, it was a bit disconcerting when one of the registered flyers found a length of manja line on the sand.

You know, it's the stuff you use to cut other people's flying lines! That's not to mention exposed body parts, particularly fingers. And it might just be an urban myth, but there is a report of at least one motorcyclist who suffered decapitation thanks to some lost manja strung between obstacles where it drifted to earth.

But I digress... And it was probably just one individual who had a bit of a brain-fade. Some of the show kites are worth $1000s, so it's not good if the line gets cut!

A Photo From the Air 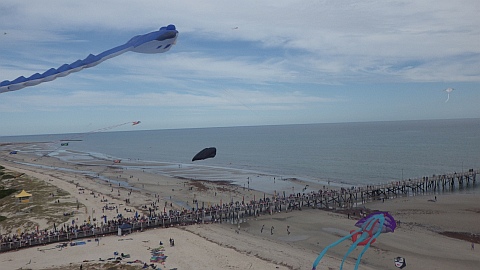 With so many kites being launched I wasn't game to do a lot of KAP. So I just took a couple of 20-shot series, shifting the camera's direction by about 30 degrees after the first lot.

The photo was taken just before the official opening of flying for the day. See how packed the jetty is! At least 14 kites of widely varying size are already in the air.

The video below was taken near the end of flying on Sunday. The first 20 seconds are ho-hum, but then it starts to brighten up! The final vertical pan skyward might bring tears to the eyes of inflatable dragon-kite fans ;-)