The View From Above

Two out of three wasn't bad, at the Adelaide Kite Festival 2016. That is, the Saturday and Monday provided some great weather in the afternoons and hence some awesome aerial spectacles for the crowd...

This year, invited guests from interstate and overseas had reserved plots of sand close to the jetty. The rest of us registered flyers arranged ourselves further north along the beach. Although it was harder for people on the jetty to see every kite well, I must say that there seemed to be fewer line tangles and other dramas than in previous years!

Kite trains and line laundry were in abundance this year. My own train of Multi-Fly Diamonds was also on display. This consisted of six carbon and Tyvek diamonds with long black tails, spaced closely and not moving much in the smooth sea air.

As during last year's event, the public flying area to the south of the jetty was alive with smaller kites. And once again, the smooth southerly would very occasionally drift a small escaped kite across the jetty into the realm of Serious Kite Flyers. Or, the kites went into the bush-covered dunes—also known as the "snake pit"! This is Australia remember.

Monday was a similar story, and more aerial photos were taken. Also, many short movies were taken, some of which were destined to help illustrate other pages on this website.

HINT: Make sure you view the clickable images on this page on a decent-sized monitor. Tiny screens won't do the images justice! 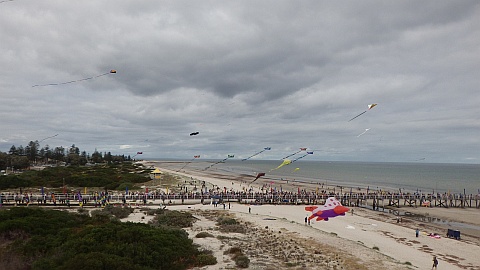 The crowd on Semaphore jetty

With the Pentax Optio camera set for 20 images at 15-second intervals, I took a few walks up and down the dunes. All the while, I was hanging onto the 100 pound line from which the camera cradle was suspended. Also, a 3-minute initial delay gave time to launch the kite.

It took more time than expected to complete each walk before returning to our little tent on the sand. So, 30 or 40 exposures would have been better! Or perhaps a 30 second time interval could have been used. But some good results were obtained anyway.

Shown below are three perspectives: toward the jetty, away from the jetty, and out to sea.

Click on an image to enlarge it. Make sure your browser window is full-screen! Try the image at the top of this page as well.

My wife and I both walked around with the camera at different times, snapping whatever seemed interesting. Here's a selection, which are also clickable to fill your screen:

Saturday at the
Adelaide Kite Festival 2016

Secondary to the real meaning of Easter, there is another one here in Adelaide... The Adelaide International Kite Festival, which has always been held over the long weekend. Once again, we headed off in the family car to Semaphore beach.

Winds were light and variable, to quote a well-used phrase in meteorology. Seasoned kite-flyers on the beach were apt to use less polite language, since the intermittent offshore breeze kept dumping the largest of the show kites in wet sand! 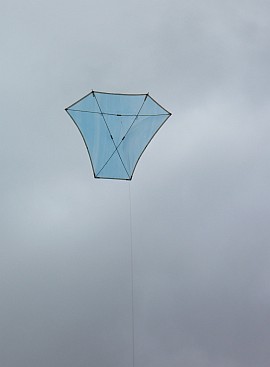 To cope with light winds we had brought the Multi-Dowel Barn Door. It's actually not a real light-wind kite, but useful over a fairly wide wind-range. The 2.4 m (7 ft.) span kite managed to stay airborne in all but the deepest lulls, while flying tailless.

During a slightly more breezy period an attempt at kite aerial photography (KAP) was made with the Fresh Wind Sled, a cut-down version of the much bigger Multi-Dowel Sled. This was way too optimistic, with the camera clicking away while sitting on the sand, to begin with. Then it was hovering just meters over the dunes while pointed at the action to the south.

So, it was back to the big barn door. The 200-pound line was replaced with the 100-pound line already set up with the KAP cradle and camera. The twin drogues were swapped over too, just to keep the kite steadier. This was much better!

In no time, the camera was taking shots at 10 second intervals down the beach to the south. After bringing the cradle in and initiating another photo-taking sequence, photos were taken to the north, since quite a few kites were up in that direction as well.

Finally, we left the barn door up without the KAP rig dangling from the line. Also, a train of colorful Multi-Fly Diamonds was put up, which my wife seems to appreciate more than any of my larger kites on their own.

In the end, with smoother winds from the south, the festival was putting on a picture-perfect display with kites of many varieties floating about in the sunshine.

Monday at the
Adelaide Kite Festival 2016

After trudging through the sand for various reasons through the day on Saturday, it was good to have a complete break on Sunday. Monday dawned, and the weather seemed set for a repeat performance of Saturday. Just in case the breeze strength really picked up later, we had the Multi-Dowel Box with us.

Before long we had the 2 m (7 ft.) tall Carbon Diamond in the air. This kite stays up in fairly light air and tends to fly very efficiently right up to its wind-speed limit around 28 kph. Today it behaved like a yo-yo, doing touch-and-goes on the damp sand as the offshore breeze came on and off. Perhaps the kite would have stayed off the sand on 300 or more feet of line, but the lapping sea water was closer than that, from the sand anchor.

I was busy getting ready to take some aerial photos so couldn't keep a constant eye on the big diamond.

Finally, well after lunch, the breeze turned and blew from the south. It was smooth and moderate in strength. All the registered flyers wasted no time in lofting their kites, and within a few minutes the sea shore north of the jetty was transformed into the spectacle all had come to see.

I also wasted no time getting my camera in the air and did three separate passes, slowly walking up and down the dunes. Each time, photos were being taken at a different viewing angle, at 15 second intervals. The lifter was my Fresh Wind Sled, a cut-down version of the big 2.4 m tall Multi-Dowel Sled.

Being the first time I have actually walked around with the KAP rig in flight, it was discovered that having only 20 exposures was a mistake. I might try at least 30 next time!

All up, it was another great day at the Adelaide International Kite Festival.