A local kite business had organized Kites, Bikes, and Picnics and had advertised the event via the usual social-media channels. Where there are kites flying, the MBK camera follows! And often, a fair turnout of local kite-club members would occur too. 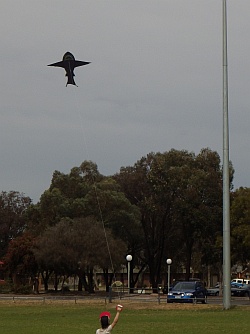 Aren (9) and I turned up for a look, although not equipped with our really large kites this time.

Just a couple of MBK 2-Skewer designs were sitting on the back seat, ready for a quick fly with no setup/rigging necessary.

Here are some first impressions...

Well, it was pretty much the modern concept of "kite flying"—small kids flying small commercial kites, aided by patient parents and a few grandparents. But wait—there's a big delta. And higher up, a large single-line parafoil was trailing twin tails in the light variable breeze.

Just a couple of kite-club members were present initially, but it looked like they (or the organizers!) might have done a good job advising the kids that you just need to stand still most of the time. Let the kite fly itself, unless there really is "not enough wind."

Every photo on this page may be clicked (or tapped, as the case may be), which loads a much larger version of the same photo.

Here are the two club kites that were aloft when we arrived at Kites, Bikes, and Picnics: 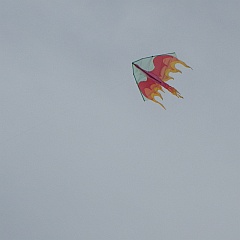 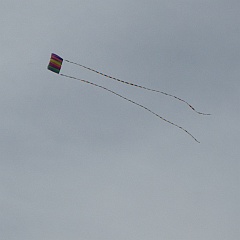 One little fellow was having trouble with one of those popular paper-and-straw (as in drinking-straw) homemade designs. As far as I could tell, his father correctly diagnosed the problem as "not enough tail." Six to 10 times the length of a fairly small kite is sometimes the tail length necessary!

There are exceptions to small kites needing lots of tail. Notably, there are those exquisitely designed and engineered "miniatures." With sufficient accuracy and a suitable design, kites smaller than your hand can fly without any tail at all.

With the breeze dropping out from time to time, helpers were kept busy relaunching kites into the next gust that came along. Of course, sometimes it was the opposite problem, with a kid overspeeding a kite whilst running into the breeze! One side bends a little more than the other and round the kite goes—smack into the grass. It's the sort of treatment fiberglass-and-ripstop-nylon designs can put up with time and again. They might not fly nearly as well as tissue and bamboo, but they certainly are tougher.

Eagle kites were popular at Kites, Bikes, and Picnics. At one stage there were a couple of these birds in the air at once, almost side by side. One of these became tangled in its own line as it blew over a few times on the ground. A small voice behind said "thank you!" as I unwound the fiberglass-and-nylon bird and set it free to soar once more.

Another would-be kite flyer of very tender age was spotted trotting off downwind. Naturally, the kite started drifting to the ground with so little "wind beneath its wings." A few words to both him and his helper set things straight, and soon the kite was up where it belonged. 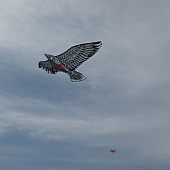 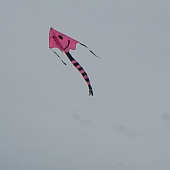 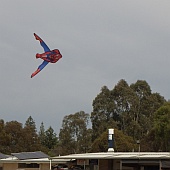 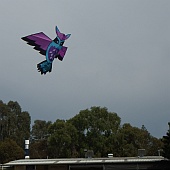 This is a very good venue, here in Adelaide, South Australia, for an event like Kites, Bikes, and Picnics. The field size was ample, extending well past the usual confines of a traditional oval-shaped "oval." Most of the perimeter was free of large trees and obstacles. In fact, on the day, the wind direction put the larger buildings and tallest foliage directly downwind. Thus, launching kites was easy in the relatively smooth and uninterrupted breeze.

Free As A Bird Kites did a nice public service by putting on such an event and managed to get plenty of people to attend. It would appear they sold a decent number of kites on the day, as well! Their colorful display was a focal point. See below: 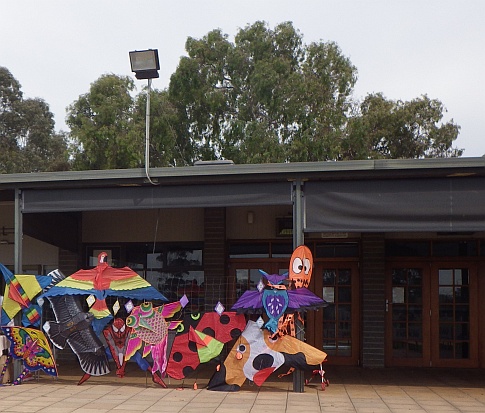 After getting plenty of camerawork out of the way, it was time to fly. Actually, it was Aren who ended up doing most of the string holding. He had become enthused by seeing other kids having a great time keeping their novelty kites in the air.

We walked back to the car and grabbed the 58-cm (48-in.) -span 2-Skewer Barn Door, which features a simple ribbon tail looped from one side of the trailing edge to the other. Up it went, the plastic-and-bamboo construction ideal for the light-and-variable conditions.

We also had the 2-Skewer Delta in the car. But deltas are so common now, why not go for something other people might find more interesting!

The bright-orange barn door flew well most of the time, listing to the left a bit during some of the strongest wind gusts. Aren did well to coax the kite back into the air when the breeze strength went the other way and dropped out. 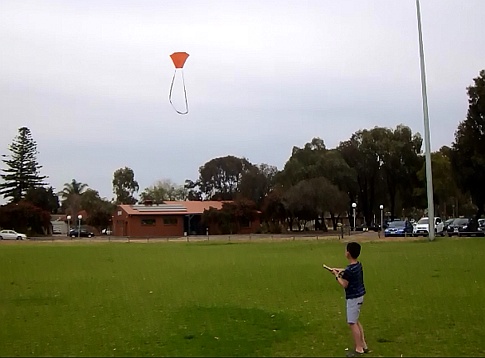 On about 150 feet of 20-pound Dacron line, the kite was holding about 100 feet over the field. Eventually the barn door came down nose first into a wet cordoned-off patch of grass. With a spar poking through an old piece of tape and the kite needing repair, we then called it a day.