These short flight reports once appeared in the site blog page - that's the one you enter via the 'what's new!' site navigation link. Just scroll down and stop at any kiting detail that appeals :-) 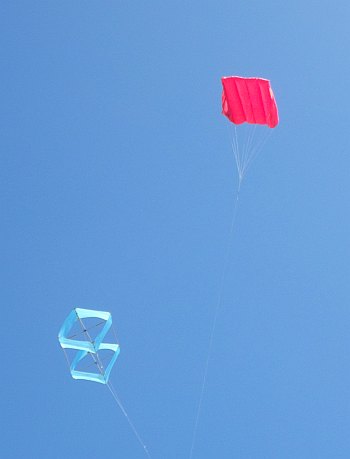 Earlier in the year

The weather lived up to the forecast and provided good conditions for most of the AKFA members who turned up with their large kites. It turned out to be a mini version of the Adelaide kite festival, with many types of kites represented. Foils, flowforms, inflatable creatures, soft stunters, and sparred kites were there.

A quick check with a wind meter revealed an average of 20 kph gusting to 28 kph from the SSW.

About the only thing that had trouble in this breeze strength was my little 2-Skewer Barn Door which could have done with much more tail. We were flying in a fairly confined area, and a row of short trees caught a few of us out from time to time! Dunes were upwind, and although fairly low, they still messed with the airflow up to around 50 feet or so above the grass.

My son (8) was impressed with the speed of the spinning drogues on one of the flowforms.

All in all, a good fly day was had by all.

Aren and I turned up at the beach near Fort Glanville where at first there only seemed to be one large kite flying. A black scuba-diver with white jellyfish trailing behind moved fluidly as "line laundry" suspended from the flying line of a large parafoil. Plus a large inflated fish was suspended near the anchor point. It was close enough for kids to touch!

After a walk around, we noticed other kites too, further down the beach. A small stunt delta was zipping around silently. Much further to the south, and not connected with the AKFA event, many kite surfers were enjoying the smooth moderate-to-fresh breeze.

Having found a good open location down on the sand, we set up the Peter Powell MkIII. This was the very latest version of the amazingly successful original which shot to popularity in the 70s and 80s.

A steerable foil was being flown just upwind of us. These soft kites apparently pull a lot harder than sparred stunt kites of an equivalent size.

Finally, we headed back to the small grassed area where the AKFA banner had been flying on a pole. A couple of small delta kites were just managing to stay in the air. The wind strength was getting a bit much, plus turbulence was coming off the low dunes nearby.

Having brought the 1.2 m (4 ft.) long Dowel Box kite, it seemed like a good opportunity to put it up.There were no real problems with that, but it did get forced all over the place in the freshening breeze and on a rather short line. Flying low makes for clearer and more interesting videos you see.

The wind meter registered 23 kph gusting to 31 kph, held above my head. On arriving home and checking the weather online, the gust strength had climbed into the mid-40s an hour or two later!

Quite a lot happened, so I'll have to be fairly concise.

At a measured 24 gusting to 29 kph at head level over the sand, the breeze was a little fresher than forecast. However, it was good for most of the kites large and small that dotted the sky. Several AKFA members were out.

Two kite aerial photography (KAP) sessions were in progress. A large inflatable caterpillar gave an impressive although fairly static display as it sat on the sand, lined up with the wind—as windsocks do, even the fanciest of them like the caterpillar. The owner also had his large octopus up at one stage, which apparently managed to drag a 200-pound sand anchor out of its hole during a spell of very brisk wind!

At least a couple of fairly big parafoils were up plus a most unusual design which looked like a cross between three deltas and a box kite.

Others were enjoying some fast flying with soft stunt kites.

After obtaining some video of my own 2 m (7 ft.) Carbon Diamond #2, I let it out on 200 feet of line. This pushed it to the limits of its tailless stability, the 30 kph gusts forcing it almost to the sand. It went first to one side, then the other, so it wasn't a simple matter of doing a bridle adjustment.

After packing up the Carbon Diamond, just for fun, I put up a Tiny Tots Diamond on about 150 feet of polyester sewing thread. It zipped around frantically, coping remarkably well with the moderate-to-fresh breeze. Others thought it looked like a mouse on drugs!

Finally, a couple of cliff jumps off the dunes under a large power kite were recorded on video. No, it wasn't me.

The day before, the forecast was for an offshore 3 kph breeze. That's a bit light, to put it mildly! However, on the Sunday morning, 11 to 17 kph was being recorded at two coastal locations south of Fort Glanville. Ideal.

After lunch, we arrived to find several AKFA kites up in light but smooth winds coming off the ocean. They were all at fairly modest heights to avoid the possibility of contacting cars in the car park, if anything went wrong! A power sled, a flat penguin, a Phoenix delta to name a few. Some line laundry dangled under a sizable parafoil too this time, in the form of a scuba diver swimming past a translucent white jellyfish.

More people arrived later, resulting in a few small colorful deltas floating around over the sand.

Mike the omni-kiter (he flies everything) went off a sand dune "cliff" under his largest traction foil. We missed it. However, he said he needed a bit more breeze to do a really good job of it!

Our first kite up was the 1.2 m Dowel Dopero, followed half an hour or so later by the 2 m Carbon Diamond. Both kites relished the 10 to 15 kph airflow at about 150 feet over the sand. However, sudden lulls downed most of the kites on at least two occasions. To our surprise the dopero managed to relaunch itself off a low dune while the big hard-Tyvek-sailed diamond was being packed away! A quick meter reading showed around 6 gusting to 8.5 kph at shoulder height at this time.

It was a good outing in sunny conditions despite the chilly breeze!

The Adelaide Kite Flyers Association flies on the beach near Semaphore most months, on the second Sunday from midday to 5 pm if possible. Today I turned up to find very little breeze, but a few AKFA members were on the grassed area. A large dolphin inflatable was laid out, having some bridle lines adjusted. Apparently, the bottle nose had been looking more like a pug nose in recent flights!

At first, my 2-Skewer Delta on 20-pound Dacron line was the only kite to really suit the very light and variable breeze. Even so, it managed to end up on the dunes a couple of times—with the line draped over a brush fence that seemed designed to trap kite lines at the slightest opportunity!

Another delta struggled up a few times but was not able to sustain flight. But then out came an intriguing-looking design, a canard kite. It had two small triangular sails at the front, with a single larger sail behind. Spars were carbon rods, bent to graceful curves. A design from Prism, called the Zero, it was obviously a light-wind kite, and it fared better than the previous delta.

A couple of kids' deltas were flying about at low heights over the dunes. They were being flown by kids, naturally. One kite was struggling, with insufficient tail causing it to loop around a lot. But the flyers were still having fun it seemed.

Another unknown flyer had put up a large retail delta, from down on the sand closer to the water. It just managed to stay up but was evidently struggling from time to time during the lulls.

So it was a disappointing time for the owners of kites that needed just a few extra kph to have any chance of flying. But the 2-Skewer Delta had many minutes of airtime at around 150 feet off the grass and dunes. The sunny winter weather was actually very pleasant, and it was good mixing with a bunch of other kite fanatics!