Images From All Angles!

During much of the Adelaide Kite Festival 2018 we were under a small pop-up shelter near the dunes.

As the subtitle implies, we got snap-happy—my wife May with her smartphone and I with my sports camera. It was a great opportunity for kite aerial photography (KAP) too, as you will see further down.

As usual, Semaphore Beach north of the jetty was reserved for registered flyers. The public made good use of the sand south of the jetty for flying smaller kites. Many of these kites had been bought just hours earlier from stalls on the foreshore.

For many years, I delighted in taking fresh approaches to documenting this large international event. This time, most of the photos are cropped square, and the emphasis is on individual kites and closeups. You might see the full tail(s) or you might not :-)

Even most of the KAP shots are selected and cropped to show off a kite hovering close to the camera. 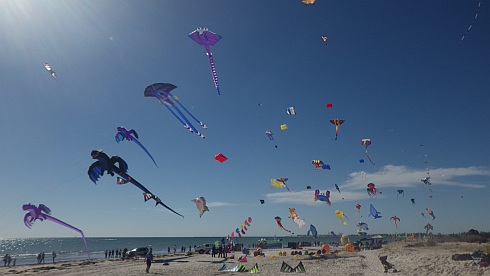 We attended on Saturday and Monday of this event, which took place over the Easter long weekend here in South Australia.

Rabbits, and in particular the Easter Bunny featured prominently in various ways and places. However, our family prefers to focus on the true meaning of Easter at this time ;-) 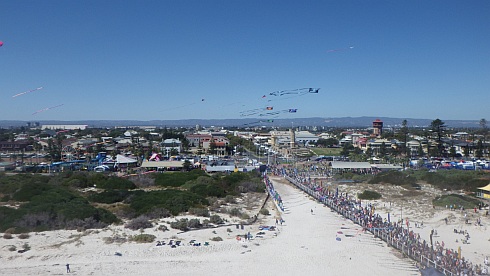 Things got off to a slow start.

Even around the official starting time (11 am), there was little to see in the air. Light-wind kites were the only ones staying up! For a change, we hadn't come prepared for really light winds. I spent quite some time fruitlessly trying to launch the Animal Train—so-called because of the dalmatian, zebra, and cow-hide patterns brushed onto the Tyvek sails with acrylics.

All morning the wind came and went, all the while shifting a long way around the compass. First it came from the northeast and then got almost around to the northwest. Finally, a gentle-strength sea breeze kicked in from nearly due south. Very quickly, the sky became dotted with kites. More went up each minute it seemed.

Nearly the whole time though, the Phoenix Kite Collective had managed to put on continuous displays of team 4-line kite-flying expertise. Special light-wind versions of the kites were used. These mesmerizing kites were a crowd favorite last year and so the team was duly invited back for more of the same this year.

With a little more wind speed after midday, the diamonds of the Animal Train were now flying steadily. I had them anchored close to the dunes, where we pitched our sun-shelter.

My wife's favorite display was a ground-based pig and cow pair. These inflatables gave each other the occasional affectionate bump as they moved about, side-by-side in the breeze!

After snapping off a few photos around the beach, I headed off toward the shoreline. With me I had a 100-pound line, the Fresh Wind Sled and my trusty Pentax sports camera in a bamboo-skewer cradle.

Within minutes, I had started executing my plan of walking toward the jetty and back again. All the while, the camera was capturing a side-on shot of the action from around 150 feet up. It was a little lower at times when walking downwind! This was KAP at its most relaxed.

Later I noticed another dangling camera, taken aloft by a large delta-conyne kite. This was the club's keenest photographer and KAP enthusiast and his results will be outstanding, there's no doubt.

To summarize the wind art on show at the Adelaide Kite Festival 2018:

Regarding those kite trains, several were by the well-known designer Robert Brasington. The most enormous trains were inflatable dragons and other designs from the Peter Lynn factory in New Zealand. Besides the three-diamond Animal Train, I later put up a colorful nine-kite display featuring drogues instead of the troublesome long plastic tails of previous years.

During most of the afternoon, registered photographers could be seen wandering here and there. They hardly knew where to point their cameras next I suspect!

A TV cameraman was there too, to document the Adelaide Kite Festival 2018. It was truly an incredible wall-to-wall display of flying and non-flying wind art. It extended from the waves to the dunes and from the jetty to several hundred meters up the beach.

In contrast to Saturday when we first attended, there was adequate breeze right from the outset.

We set up our shelter in much the same spot as before and didn't waste much time putting up the Animal Train of three painted Tyvek diamonds.

Others had kites up way before the official opening time of 11 am. Obviously, they were intending to make the most of the good conditions!

After some time, adequate wind strength turned to ample. Holding up the wind meter above shoulder height it registered 16 kph gusting to 24 kph. Not long later, the meter read 18 kph gusting to 26 kph. As the commentator had indicated over the PA, referring to a weather forecast, the wind was certainly picking up.

Just before midday, with plenty of color floating over the beach, I decided to do some KAP. At this time, the direction of the sun allowed shooting eastward from the dunes.

For the first sequence of 40 shots at 15-second intervals I just headed straight up toward the jetty and back again. I covered 50 to 100 meters each way. The big Fresh Wind Sled with its twin bright-orange drogues sat steadily in the slowly freshening breeze. The camera was dangling more than 100 feet over the sand. Gloves would have been a good idea since the wraps around my hand were getting painful!

For the next sequence of shots, the camera was swung around by 45 degrees or so in its bamboo cradle. By shooting more to the northwest, more kites could be captured in each shot, from a more head-on perspective.

This time, I got a little more adventurous, moving right in among the kite lines near the jetty. Also, I went further north to capture kites flying at the extremity of the flying area. This involved some winding about through the "snake pit" over sandy stretches between the large bushes. My son saw a rat in there once—evidently that's what the snakes live on ;-)   I kept my eyes open don't you worry.

By now the breeze had really ramped up. The second KAP shoot was done with a full turn of flying line around my backside. Yes, you read that right. With one hand holding the winder and the other resting on the line, it was a much more comfortable experience than the first shoot.

A small number of expert kite surfers kept the crowd entertained by performing spectacular freestyle moves and soaring jumps off of small waves. My son kept bugging me to look—but I'm more of a single-line guy :-)

Later in the afternoon, the increase in wind speed did not let up. Many of the largest kites were struggling. They were listing off to one side or swishing about, right at the top of their wind range. Unfortunately, I had missed the boat as far as putting up the nine-kite train of Tyvek diamonds. To do it now would be risking damage to the kites. Gusts of 35 kph were spinning the little wind-meter cups into a solid blur!

The tide was coming in as well, so there were anchor vehicles shifting position. Many kites were being taken down even before the official closing time of 5 pm. Never-the-less, the public had once again been treated to a fantastic show at the Adelaide Kite Festival 2018!

Get yourself next to a nice big screen and click on any image below to start the viewer!

Individual Kites
Viewed From the Ground

Individual Kites
Viewed From the Air

It's what you hang on the line!

Many of these colorful inflatables are just glorified windsocks, which contribute only drag forces to the flying line.

Others are semi-flying, which means they do contribute some useful lift force to the flying line. However, they are unable to fly well (or at all) when on the end of a line.

Wind Art on the Sand

There were a small number of ground-based installations. They were whirling, bouncing, shifting, or flapping—and always colorful:

I hope you enjoyed this somewhat image-heavy coverage of the Adelaide Kite Festival 2018!

While our Animal Train of diamond kites was still coping with the wind speed on Monday, this video was taken. It begins with the centerpiece of the festival, a train of large inflatables. The clip concludes with our little kite train coming into view, in closeup: