What We Saw Over Two Days

Leading up to the Adelaide Kite Festival 2009, we had high hopes of focusing on just a select few kites. On the two days we attended, it didn't quite pan out as expected. 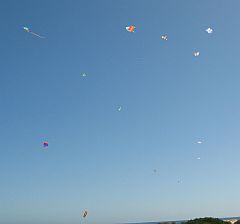 Approaching the festival on foot

Second, our up-to-date but decidedly low-end camera wasn't really up to the job of taking high-quality closeup images of distant kites.

Optical zoom at 4x is very handy but has its limits. When tethered to the jetty, a kite overhead can still be more than 300 feet away from the lens. Perhaps we'll be able to splash out on a mid-range camera with telephoto capability by next year!

Despite all this, there were still some highlights and a number of interesting kites on display at the Adelaide Kite Festival 2009. That's not to mention some heavyweight stunt-kite flyers.

Ermmm ... I'm referring to the level of talent!

This was mainly to be seen in the public flying area this year, south of the jetty! With most of these kites on fairly short lines, it was actually more of a kite carpet when viewed from a distance. Dozens of kites hovered over the sand in light winds coming in from the sea to the west.

Because of the weather, over the Friday and Saturday of the Adelaide Kite Festival 2009 there seemed to be more action in the public flying area most of the time.

For example, on Friday, masses of school children managed to outnumber the kite-count over in the registered flying area. It looked like they had been to a workshop since each child was flying a simple diamond with colorful drawn-on decoration.

We put up our own Dowel Diamond on Friday afternoon, after the Dowel Sled had found the breeze too strong. The diamond, which is basically an Eddy kite, fishtailed a little in the moderate sea breeze. The kite seemed to be just above the middle of its wind range. 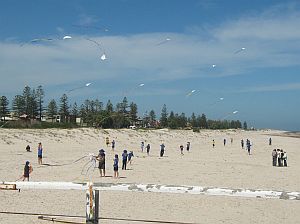 Free-for-all kite flying on the sand

A few of the more attention-grabbing kites we saw on the Friday were:

One of the flowforms sported a red spot like the Japanese flag and the other featured some simple but effective black line-art.

Again, on the Saturday, most kites were south of the jetty. These included large numbers of kites that I'm guessing were either made or bought at the Adelaide Kite Festival 2009. Though the size of these kites was generally quite small, some were very attractive and colorful examples of their type. Small sleds, deltas and parafoils abounded! As usual, plenty of kids or "kids at heart" were flying novelty kites as well.

We showed off the light-wind capabilities of our orange-garden-bag 2-Skewer Dopero kite on Saturday afternoon. It had no trouble soaring up to 400 feet above the sand, with 150 meters of 20-pound white Dacron flying line bowed out beneath it. I don't think it's ever flown in such smooth air before! It just sat there, "nailed to the sky" as it were, occasionally gaining or losing some height in response to the changing wind strength.

Highlights—Both Sides of the Jetty

Here are just a few things which stood out at the Adelaide Kite Festival 2009:

Friday was not officially part of the Adelaide Kite Festival 2009, apparently, but it seemed that many of the registered flyers were there anyway. Winds were from the west and very light to begin with. 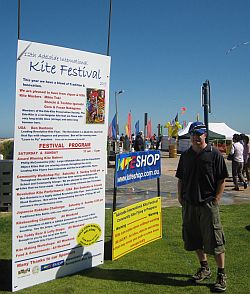 Around the middle of the day, a moderate-to-fresh sea breeze came in from the south, providing plenty of opportunity for some large deltas and rokkakus to fly high.

The maximum temperature was only in the mid-20s (C)—pretty pleasant! There was just a small amount of mid-level cloud most of the day.

Saturday was "official," as evidenced by that large billboard planted in the grass among the tents and stalls. In the morning, a light-to-moderate northerly enabled many of the registered kite-flyers to put up their large kites. The nice thing about this wind direction at Semaphore is that all the kites are much closer to the jetty! Hence it was easier to get closeup views and photographs of the action.

One rok actually came down during a lull, and I collided with the flying line as it draped across the wooden boards. Ooops—that was after standing right next to that yellow warning sign beside the billboard!

Later in the day, the wind turned westerly. Unfortunately, it was so light and variable that the registered kite-flyers couldn't do much. It was an afternoon to pull out the lightest of light-wind kites! As far as clouds went, Saturday was totally "blue"—no clouds at all.