WindJam07 was held on the Glenelg beachfront in Adelaide, South Australia, on Saturday, August 18, 2007.

It was well advertised

Publicity for this event had been around for weeks, since it was part of the Scouts Australia Centenary celebrations. Not that we have anything to do with the Scouts movement, but hey, this is a kite site! So if kites are in your blood, read on.

We had spotted a small article about WindJam07 in the local newspaper and then registered online a few days later. It wasn't a bad deal actually. For $10 you got to collect an attractive simple-to-rig kite on the day. Plus there was the opportunity to be part of a kiting world-record attempt.

On the day, we took the camera and some spare batteries and headed off down to Glenelg. That was a bit closer to home than the Adelaide International Kite Festival this time.

Shortly after leaving our car, it was clear that something was happening in the area as three skydivers descended gracefully onto the sand. Not that we saw the landings; there were some large buildings in the way. One skydiver was towing a very large banner bearing the Scouts logo.

Higher up, a lone light aircraft droned loudly, circling over the foreshore.

Some large kites were floating at 100- to 200-feet altitudes.

The first one we noticed was an orange ram-air sled, just moving slightly in the very smooth air coming off the ocean. It might have even been taking some advantage from the nearby tall building, as the sea breeze flowed up and around it.

Milling Around, Getting Ready

After one or two false starts, we managed to find the right entrance for collecting the WindJam bag containing the kite and a few other bits and pieces. You know, people trying to sell you stuff.

As we headed down the beachfront a little, it was clear that a lot of organization had gone into WindJam07. Officials with orange caps were everywhere, and the sandy shore was cordoned off into a number of large rectangles. Each rectangle had its own color as indicated by large flags in the corners. These flags were actually flapping around a bit in the breeze. Now that was a good sign!

Earlier in the day, it seemed like the breeze on the ground was going to be extremely light, with barely any movement in the treetops a bit further inland. However, just a couple of thousand feet up, large amounts of cumulus cloud was scudding past at a reasonable rate.

Close to the allotted time for the record attempt, people were allowed onto the sand to collect a spreader strut for their kite. At the same time, you handed over a small card collected during the registration process. Collecting these cards would tell the WindJam07 organizers exactly how many kites were let into the official flying area.

Soon, the beach presented quite a unique picture—a picture not unlike the one below :-) Many hundreds of identical kites fluttered and dipped on very short strings, above the sand. The sea (at low tide) was back behind there somewhere. Not much sand could be seen actually; it was just people and kites blotting it out! 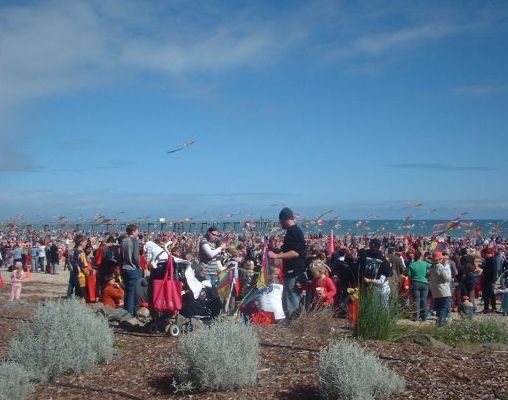 Not much room, down on the beach!

Each person only had a few square meters to fly in. From experience, it was sometimes tricky staying out of the way of other kites, despite the strings being only a few meters long. If the strings had been any longer, there would have been absolute mayhem, with tangled lines everywhere! The organizers obviously knew this. Maybe they had previous WindJam experience!

The wind was quite marginal, with many kites failing to stay up during lulls. All except, that was, for some lucky person who was flying on a long string. Can you spot it in the photo? Did they sneakily bring their own, or did they bribe the WindJam07 officials to get one of the long cotton lines that were supposed to be handed out afterward? ;-)

Here's another view of the beach, showing some more detail of the kites on their short strings: 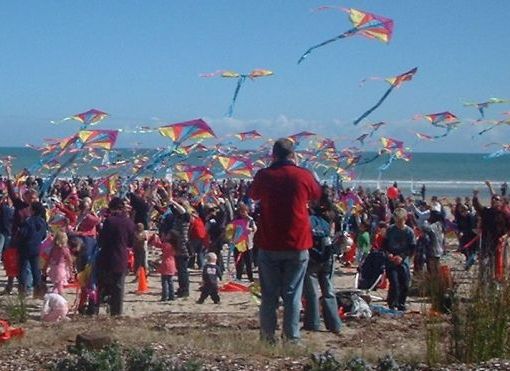 You could call it a delta-fest

It's time I tell you a little about the kite itself. There's a closeup of it in the photo, being flown by yours truly. The crazy angle is my wife's artistic license in action! :-) 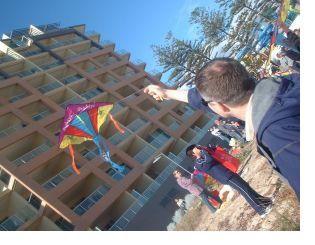 ...and this was ours

As you can see, it's a small-to-average-sized delta with a keel. The keel doubles as a bridle, since the flying line is attached to a small reinforced hole where the keel comes to a point. The sail material is probably ripstop nylon with panels of different colors.

The tails are mainly for effect, since the keeled design is quite stable. I'm guessing that really, based on the fact that there isn't a whole lot of tail area there! In any case, the longer center tail would help when the kite is flown in much stronger wind. The two little tails, one on each side, are also helpful for damping out movement.

Setup of the WindJam07 kite was extremely easy, since it just involved plugging a single flexible cross-stick into two little nylon cups, one on each side-spar of the kite. This spread the side-spars apart, putting some tension into the sail as well. Then, it was just a matter of threading the short flying line through the hole in the keel and tying a knot.

Launching the kite should have been dead easy, but try doing it when there is barely enough wind, and 100 or more kites upwind are all putting little eddies into the breeze! Tugging the string to bob the kite up into some smoother air usually did the trick. Once at full stretch, several meters up, the WindJam07 kite flew very well, weaving maybe one or two meters to each side. In perfectly smooth air it probably wouldn't move much at all.

Even in such light air, I was a bit nervous about attaching the kite to the 3-kg fishing line we use for the MBK kites. The WindJam07 kite was so much bigger, and every little gust tugged on my hand much harder than an MBK 1-Skewer Sled, Diamond, or Delta has ever done! I could do without the embarrassment of seeing my new Windjam07 kite float away after an extra-strong puff from the faster-moving air higher up.

When You Hear Fireworks... 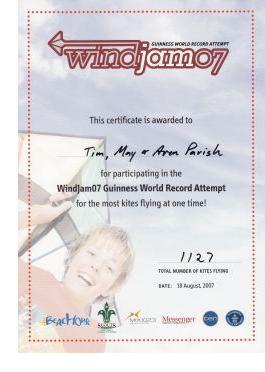 Are you wondering how on earth the organizers tell more than a thousand people spread out over a beach when to fly their kites for a crack at the record? Easy, just send up some giant fireworks to give one minute's notice! There was nothing much to see in the broad daylight, but even those who hadn't read their programs soon realized what was going on.

The first lot of fireworks erupted into a blue patch of sky, showering bright little points of colored light all around. Smoke drifted slowly downwind, as a buzz ran through the crowd, "get the kites in the air!"

There was also a second attempt some 10 minutes or so after the first. I got the distinct impression that someone was timing the attempts with periods when the breeze seemed to freshen a little. Were they using some local sailor with local knowledge of the sea breeze or something? Were they using wind meters? Who knows.

During the second attempt, I heard a nearby official pleading with people to get inside the "official" area in order for their kite to be counted. Oops. Like many others, I had moved outside for some room to fly! Anyway, I dutifully went back in and tried to keep my kite in clear air.

By this time, several other kite strings had mysteriously stretched to many times their original length. Someone must have snuck in with totally unauthorized sets of long strings! :-)

Here are some minor incidents from WindJam07 that I remember, just for some "human interest" ... or something...

We gave Aren a go at flying the kite while May, my wife, tried to photograph it. He promptly let go of the line, letting the kite float off and nearly clobbering a lady sitting on the sand, before I could catch it. We tried again, with me holding the line a little way out for safety, but he just threw the reel onto the sand for the fun of it. Sigh. Never mind, such are 18-month-old kite pilots.

During the second record attempt, while I was making my way through the crowd looking for a good spot, another kite contacted my flying line and slid down it toward me. I turned to the flyer and made some comment about "fighting kites, like in India." He said something about "they used to do it in Thailand too."

Someone who had obviously flown kites before tried attaching a flying line to the cross bar of another kite, thereby "stacking" the two kites in the air. Now, does that count as one or two kites according to the rules?

A young guy, perhaps an engineering student, had extended his flying line by a meter or so by attaching it to a plastic bag! I guess he was trying to get into some smooth air just above the rest of the kite-flying rabble!

I think I'll wrap it up there. I hope you enjoyed my account of WindJam07 in Adelaide, South Australia! Hopefully, this page has provided a little more detail than Channel 10 did in their afternoon broadcast! ;-) Actually, we walked past the reporter mid-interview as we returned to our car.

P.S. What was the actual record for WindJam07? Officially, it was 1,127 kites, although that hadn't been independently verified when this page was first written. England held the previous record of some 900 kites in the air at once.