A Public Flying Focus This Time!

Our coverage of the Adelaide Kite Festival 2013 carries on the MBK tradition of taking a new angle each time. Did YOU fly anything down at the beach, on the south side of the jetty? Chances are, your kite is now featured in closeup, in one of the photo gallery categories below! Mind you, this year we only attended on the Saturday of the Easter weekend. 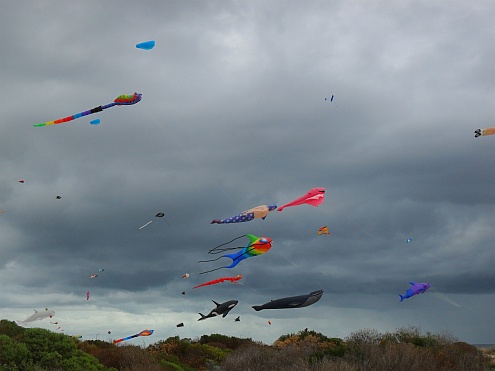 Of course, we have not ignored the magnificent kites of the registered flyers completely. See the photo. This shot turned out surprisingly vibrant, considering the miserable lighting conditions of the day. Incidentally, most of these registered-flyers' kites have been seen and photographed by us in previous years. They were flying from north of the jetty as usual.

We arrived at the Adelaide Kite Festival 2013 at about 12:30 pm on Saturday. We had several MBK kites in the trunk (boot) of the car, to be able to fly in various wind speeds. By the time we walked onto the sand and rigged the Dowel Delta, winds were 9.6 kph gusting to 13 kph but had been lighter earlier during the morning. The commentator was noting how this was better for the big kites, north of the jetty.

But the fresher wind was worse for us and our light-wind delta! I rigged the Dowel Delta and put it up briefly. On 3 meters (10 feet) of line, it veered left, veered right, leading edges bending in at the tips. The kite might have survived for a few more minutes but at the risk of snapping the spreader—particularly if we let the pale-orange delta up much higher where the wind tends to be a little stronger.

Just for the record, here is a list which summarizes the big kites that we saw in the air on Saturday at the Adelaide Kite Festival 2013: 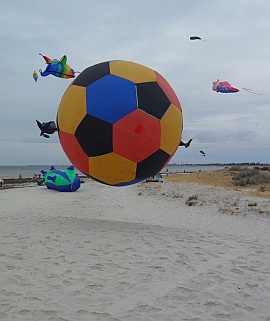 In addition to these flying craft, and ball, there was much of the usual line laundry from previous years. One in particular is worthy of special mention.

There was an intriguing chain-like structure that rotated continuously in the wind, maintaining its general looping shape, but shifting around with subtlety from moment to moment. It was an aerial belt on invisible pulleys, if you like! This is where a picture, or better yet, a video, would be worth 1,000 words. But sorry, I didn't get it.

At 2:30 pm, the breeze was definitely stronger. It was averaging 11.5 kph with gusts to 17.5 kph when I did a brief check at shoulder height.

I spent quite some time criss-crossing the sand and piles of damp seaweed south of the Semaphore jetty, getting shots of the various small kites. It was really quite a display of the retail scene! A couple of soft stunt kites were in there as well.

A few designs were obviously being sold somewhere nearby. There might have been 5 or 10 SpongeBob diamonds in the air, for example!

Just click on any picture in the categories below to start up a full-featured gallery. For any picture that really catches your eye, you can then see it in a much larger size by clicking on the icon at top right.

The last category is a catch-all for any remaining images taken at the Adelaide Kite Festival 2013.

Several lolly (candy) drops went off during the afternoon at the Adelaide Kite Festival 2013. As usual, these were a massive hit with the kids! A bag of sweets, each individually fitted with a spinning "parachute," would be hoisted into the air under a kite "messenger." The messenger is just a small delta-shaped sail with a simple mechanism that releases a payload when the device bumps into a stop attached to the kite line.

The lollies drift down, some falling faster than others, and the kids stream in from every direction. By the time the last drop has gone, and with a bit of sharing going on, no kid is disappointed. Hopefully.

The same person with the same distinctive green-and-brown delta-like kite has provided this essential service for quite a few years now. On a previous occasion, I captured some video of the event. Browse around a bit, and see if you can find it

A Wet Ending and a Helicopter

Later in the afternoon, rain clouds came in despite earlier assurances that rain would stay away. About this time, the wind swung around to the southwest. During this transition it was interesting to watch some mild mayhem! Big kites were nosing around with some of them losing height, unsure of which way was upwind. 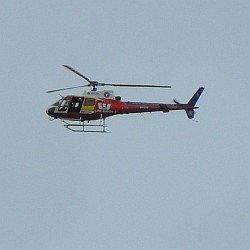 A chopper flew past

Finally, 15 or 30 minutes later perhaps, the winds smoothed out in the new direction and freshened up a bit more. Once again, all was sedate up there with all the colorful impressive kites back on show.

We had the small 1-Skewer Sode with a rather long tail which would have coped well with the wind strength, but we decided to go home instead. This was mainly due to the dropping temperature and threat of further rain. Showers could be seen in various directions but mainly to the south, over land and sea.

It was a reasonable kite-watching outing though, with the whole gamut of single liners on show. There was everything from a struggling novelty ship kite to the giant blue whale and Peter Lynn manta ray!

Not all spectators were watching the Adelaide Kite Festival 2013 from the sand. A least a couple might have been viewing the kite cloud from above, in the WestPac rescue helicopter as it flew past.