One Of the Biggest

In the southern hemisphere, that is! This page was our very first write-up of the event. 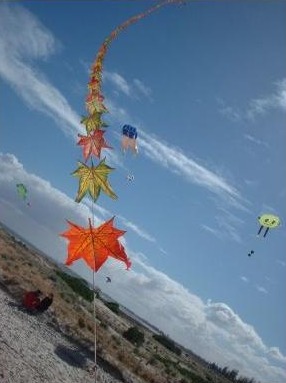 The Adelaide kite festival we attended was officially the Adelaide International Kite Festival 2007. Mind you, the attendances aren't the same from year to year, and the visitor count doesn't always go up.

Events involving kites are very dependent on the wind, of course. Hence if the breeze fades, the crowds tend to as well!

This festival is just one of many others held each year around the world. Where we live, we are within about 45 minutes of the Adelaide event, by road. We spent a few hours wandering around the stalls at Semaphore and up and down the jetty.

The beach to the south of the jetty was reserved for public flying, while the north side was packed with official flyers from Adelaide, interstate, and a few from overseas. 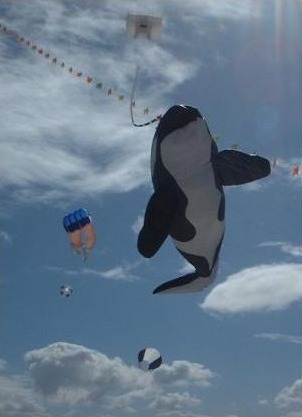 I'll just overview our morning's experience at the Adelaide kite festival first. Then we'll get into the nitty gritty detail.

Driving along the Esplanade beside the beach, the first thing that came into view were two magnificent stacks of small Taiwanese kites stretching far up into the cloudy sky. There's one near the top of this page, photographed by a lady called Ilene ;-)

Down the other end of the size range, we spotted a kid flying a "Baby Sled kite" in the park. This little sled kite was not much bigger than a piece of writing paper, dancing around on a cotton line.

After parking next to the beach on the Esplanade, we got out and walked toward the Semaphore jetty where the Adelaide kite festival was in full swing.

By now, half the kites were visible, and we could tell that some of them were rather big.

For example, there was the killer-whale inflatable kite, which looked like it could fit a couple of average-sized cars inside it.

Passing the sideshows and stalls, we went straight onto the jetty, which today doubled as the official observation platform for the public. 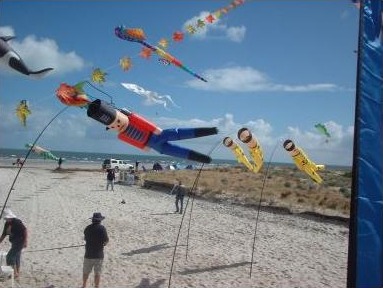 A bit of everything, including art windsocks

People were constantly walking to and fro across the wooden boards and crowding the railings if anything particularly interesting was being demonstrated.

The Taiwanese guys had their kite stacks tethered to the jetty itself.

A bit further down was a small collection of spinners and other windsock-like creations doing their stuff in the freshening breeze. Also there were some flat kites with wide ribbon tails. 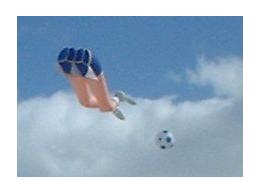 The Adelaide kite festival had a large square official flying area on the sand. A large 4WD vehicle was parked near the center. Tethered to the font bumper were the biggest inflatable kites on show. These included the impressive killer whale mentioned earlier.

A few other inflatable creations here weren't actually kites but just for decoration, attached to the flying line of another kite. The most striking was the mermaid. She actually looked like she was swimming through the air! You can see her in the picture further down.

Another sight at the Adelaide kite festival was impressive and funny at the same time. A flowform kite feeding air into an inflatable set of soccer-player legs, complete with a separate ball. 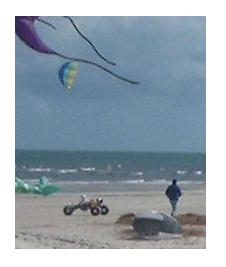 The legs actually "kicked" a bit in the breeze!

Among all this was a lone kite-buggy driver, expertly darting around over both wet and dry sand. He also managed to avoid getting snagged on any other kite lines.

The kite buggy was powered by a Peter Lynn C-Quad 2.2 m single-surface power kite. No, I didn't ask him, it was printed clearly on the kite in big letters!

Beyond this point lay the ocean where a bunch of expert kite-surfers showed everyone how it's done, with a mixture of rectangular traction kites and elliptical parafoils. The sea was choppy, full of small waves with the tops whitened in the wind. The Adelaide kite festival extended over sand and sea!

A Closer Look at the Kites

Regarding the big inflatable kites, I should mention that they are not inflated on the ground by someone with huge lungs. Rather, they have a small opening in the nose area and the wind keeps them pressurized as they fly. Here's a short list of just some of the designs we saw in the air at the Adelaide kite festival. These were all quite big kites, several meters long: 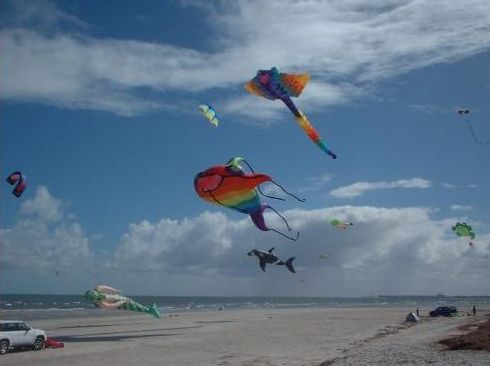 So many large inflatable creature kites

By the time we got to the end of the jetty, the breeze was howling, flicking us with sand and spray from the beach below. The inflatable kites were distorting and moving around a lot. The long stacks of Chinese kites were flying at a low angle; the tension in the line must have been incredible. I got a closeup look at the lines where they were tethered. They appeared surprisingly thick compared to the rather delicate bamboo-and-nylon hand-painted kites attached! But with so many of them, the pull must really add up.

One stack of kites looked like autumn leaves while another had colorful birds painted on. At least one of the stacks had a beautifully intricate elephant design on the highest kite, which was much larger than all the other kites in the stack. We saw a couple of the Taiwanese guys feeding one of these stacks into the sky. First the elephant kite, then all the others went one at a time, slowly and carefully but without stopping. They seemed to be enjoying themselves at the Adelaide kite festival, despite being the only ones flying Asian kites.

Anyway, back to the kite surfing. These guys, using not-so-big traction kites were allowing themselves to get lifted 3 meters (10 feet) or so into the air. And then splat, back they would come into the ocean. At other times they got some nice bursts of speed through the surf, using small waves to launch into the air from time to time. I saw some parafoils and also a kite with inflatable leading-edge and a few rigid spars in the fore-and-aft direction (battens). There was nothing very big, since they had all sensibly selected small kites for the heavy wind conditions.

Later during the morning, we wandered back to the stalls area while the wind calmed down quite a bit. This allowed a lot more kites into the air. Now, you could see a variety of deltas do their thing, their lines stretching up at high angles. Efficient kites, are those deltas.

Oh yes, and a guy came out with a stack of three small black delta stunt kites. He put on a great display of precision flying. You wouldn't believe how fast those things were. On the other hand, he had them hovering motionless right at the edge of their flying area, just a meter (3 feet) or so above the sand. Another trick that looked pretty cool was a set of axis spins while drifting left to right about a couple of meters (6 feet) off the sand. This sort of thing helps to keep people coming back to the Adelaide kite festival year after year!

Before we left, we bought a Baby Sled kite for our little boy. It was just 5 Aussie dollars, ready to fly. At this writing, out boy can nearly stand up. So he will be getting into kiting at a very tender age!

Is your idea of a kite tail a length of cheap string with a little bow-tie thingy tied into it every half a meter (1.5 feet) or so? Here's a list of every kind of kite tail I remember seeing at the festival. By the way, I'm including drogues in this list.

A drogue is basically a windsock or round-parachute shape, made out of similar material to the kite itself. The drogue hangs off the bottom of a kite, where it catches air and creates "drag." Just like a tail, this helps to keep the kite pointed into the wind. Here's the list:

Yep, there was not one "traditional" kite tail to be seen at the Adelaide kite festival! See if you can spot some of these tails and drogues in the pictures on this page.

We also saw quite a few examples of "spinners" in the air, mostly tethered to the line under a flying kite. One of these was in the shape of a huge windsock and spun quite fast in the strong breeze, putting on a colorful show. Other smaller spinners were attached to long flexible poles driven into the sand.

At the Adelaide Kite Festival
Commentary From a Dune

The Adelaide kite festival was commentated by a lady with a radio microphone, sitting on a small sand dune near the jetty. She had obviously been to a number of kite festivals all around the world and had deep knowledge about kites generally. Here's a few things we heard her say over the PA system:

That's it; I hope you enjoyed our report on the Adelaide kite festival of 2007!