The full title for this event in 2014 was "All Ages Come and Try Kite Flying Day." That really said it all. It was organized and almost too successfully advertised by AKFA, the Adelaide Kite Flyers Association in South Australia. 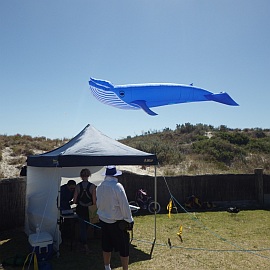 Flying kicked off around 10 am, but I was not on the scene until after 1 pm.

Plenty of kites were up and their owners' cars were occupying all the parking bays.

Eventually, I found a sneaky spot between two sets of marked parking areas and selected the 2-Skewer Delta to take down to the sand. Yes, the flying was at a beach. It was near Fort Glanville, south of the Semaphore jetty in Adelaide.

As you will see in all the photos, it was a brilliantly sun-lit day with hardly a cloud to be seen in the sky.

A few photos were taken before letting up the small bright-orange delta on a 20-pound Dacron line. There's more on that a bit later.

Unmissable while approaching the event by car, some familiar large show-kites were floating around in winds that were just strong enough. Apparently, the breeze was very light earlier on and it looked like the whole thing could have ... flopped.

Here are a few photos of the large kites, both sparred and inflatable. Click on an image below to see them much larger: 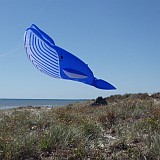 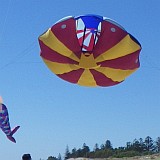 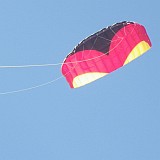 The large genki (below) deserves special mention too, since I was most impressed with how it looked and flew! It was anchored on a 600-pound Dacron line since the kite had been overflying the anchor point on a lighter line.

I'm not sure what material the spars were made of, but the bright-blue-and-white high-aspect-ratio genki kite was both stable and efficient. An impressive ripstop-nylon wonder it was. Its owner had trimmed it to fly off to one side, to keep a safe distance from some of the other large kites flying at over 200 feet. Neat trick! 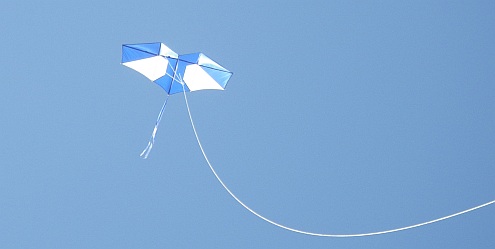 Hi-tech genki on a heavy line to reduce overflying

Quite a number of people had brought their own kites. To "try kite flying" was the main point of the event.

A couple of bright butterfly kites were coping well with the steady breeze. However, the wind strength was creeping up with every passing half hour. A ship kite was gamely trying to stay airborne. Some of these fly much better than others! You could be forgiven for wondering how they fly at all.

A handful of people who were more into steerable sport kites were having a great time. One in particular was zipping about, seemingly ripping the air apart with a loud brrrrrappp sound as its trailing edges fluttered furiously.

With AKFA members handing out more than 100 kite kits to the kids, it was not surprising to see quite a few of those hovering over the sand. Some were anchored by very young pilots!

Here's a few photos of the kites flown by visitors. Click on an image to see it much larger: 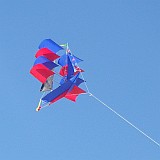 A funny novelty ship kite—more stable than it looks 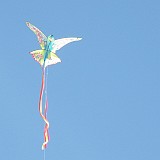 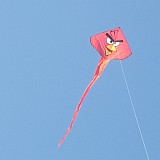 A typical kids' retail delta—colorful, easy to launch, and efficient