Here's a selection of the very best kite pictures we managed to capture at the Adelaide International Kite Festival in March 2009. There's just 12, to avoid making this page excessively slow to load.

I had fun going through all our raw imagery of the event and cropping and resizing to best effect. I don't claim to be an artist or even a great photographer, but I still think you will enjoy these shots if kite flying is in your blood!

To set the scene, the pic below is of the large UFO kite that has been a feature of the Adelaide kite festival for the past few years. The commentator and other officials could often be seen sheltering under this inflatable flying saucer while directing the festival.

The much talked-about UFO Kite

Here's a couple of typical large festival parafoils. These are often used to string up non-flying inflatables and other pieces of so-called "line laundry." Sometimes, they help to raise a flying inflatable higher than it would go on its own. 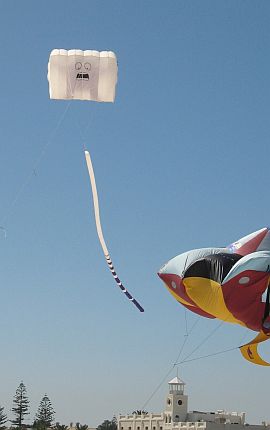 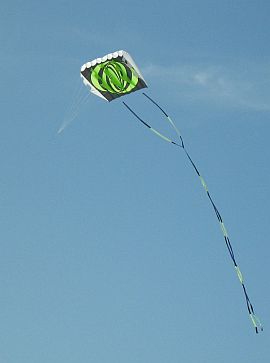 I thought this would logically fit after the first photo on this page. It's something to do with that alien intrusion on the right side of the photo with the white parafoil.

And the other photo is another large flat parafoil kite, with an eye-catching green-and-black abstract design on the lower sail-surface. A matching tail-tube in a loop helps to keep the kite stable. The long single tail-tube below the loop might have been attached for even more stability. Or perhaps it was just for looks on this important day!

Large colorful deltas are another kite festival staple, at least in Western countries. Here are three good examples, which have all bobbed up in previous years. 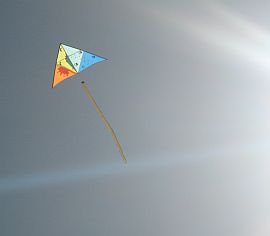 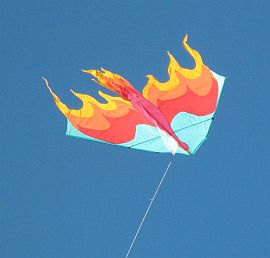 The first photo... This colorful delta kite was floating about not far from the direction of the sun. This always gives opportunities for a good photo. Here, there were lens effects and the translucent sail fabric glowed with bright sunlight.

The second photo... Up until now I just thought this image showed a pale-blue delta with a flame effect along the trailing edge. However, looking closer, it appears to be a bird design with flaming wings and tail feathers. A fire-bird was my initial thought. Having now met the owner who made it, it is in fact a Phoenix kite. Anyway, it makes for an eye-grabbing image! 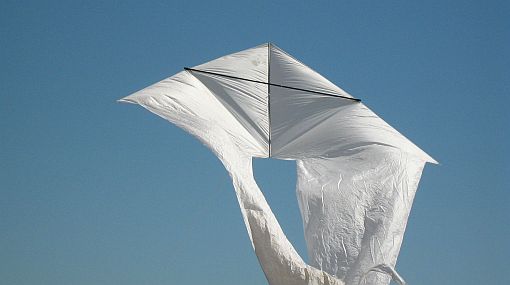 We've seen this magnificent white delta a few times now, always tethered quite close to the sand. On this occasion, the wind direction allowed us to get very close. The broad matching ribbon tails extend almost the full width of the trailing edge and are quite long too, although that can't be seen in this photo.

There Has to Be a Sea Creature 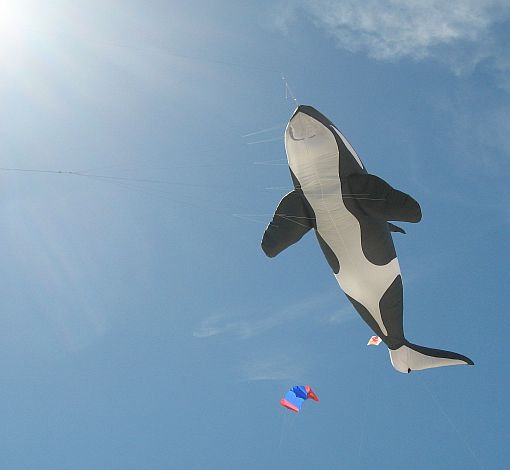 In this case, as usual, one of the most striking inflatables was this very large killer-whale kite. It "swam" convincingly in a breeze that was just strong enough to get it airborne. Again, we were fortunate to be in quite a close position to get this shot. Also, the kite was on a fairly short line this year.

Stunt kites were everywhere in 2009: two-liners, four-liners, flat-paneled, and parafoil. Here are a couple of shots of these maneuverable kites in action: 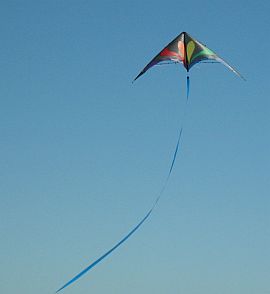 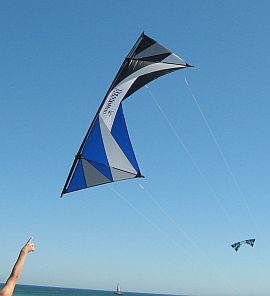 The big beautiful delta stunt kite in the first photo trailed a very long narrow tubular tail, which traced out every move the stunter made in the sky. There were a number of these in the air from time to time, most of them well away from the cluster of single-liners near the jetty.

As for the second photo ... it's a unique shot hey? Somebody just happened to be pointing right at this quad stunt kite just as it was expertly hovered very close to the jetty. Perhaps the floating object was being pointed out to a young child. That's what we would have done with our very young Aren in similar circumstances!

Last but Not Least

These three are all different types, so they get lumped into this last section. They're nice kites though! 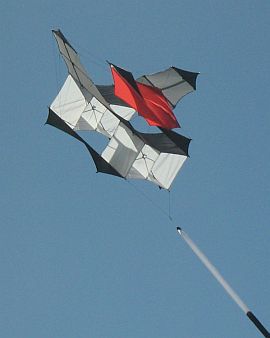 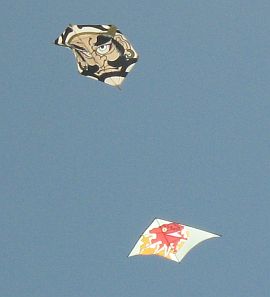 The first image is a great light-wind Cody, which if I remember rightly, uses 1/2-ounce ripstop nylon and carbon-fiber spars. Hence it's very much lighter than a traditional Cody, even taking account of the smaller size.

And the other image... This traditional Japanese rokkaku looks like it is rather concerned about the delta on its tail! Other roks were actually from Japan and were flown by men in traditional "happy coats." I saw a trio of these kites accidentally tangle when winds were too light to keep them all up reliably. 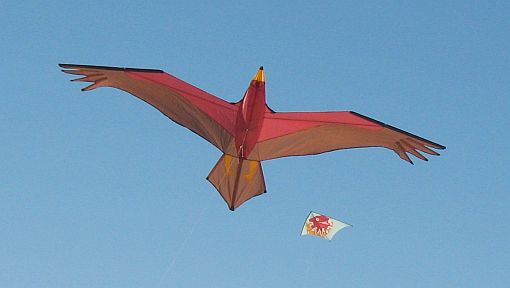 At the time, I knew nothing about this delightful bird kite, except that I just had to get a photo of it! In later years it turned out to be the work of the same guy who made the Phoenix delta. In fact, it was the first kite he ever built!

That's it for our kite pictures from the 2009 Adelaide kite festival. There was quite a range of subject matter—everything from UFOs to birds!