Kid's Kite as a Calligraphic Display

OK, so there's a chance you came here to make a simple kite. Don't worry, I've definitely got that covered too! Try these other pages on this site for some step-by-step How To info :-)

There are videos on those pages too. 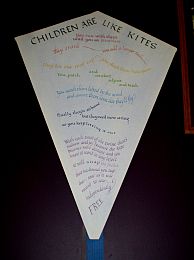 Calligraphy on a kite

Now, the photo shows a small simple kite which my sister spotted and photographed one day.

The kite was part of a foyer display at the Tea-Tree Gully library, in Adelaide, South Australia. The Calligraphy Society of South Australia was behind the display.

The calligrapher in this case was Beverley Carter, who gave me a little background info. The photos are displayed with Beverley's permission.

See all the fancy writing on there? It's a poem!

The first two attempts at the calligraphy were rejected but the third seemed to work nicely when done directly onto the sail of a simple kite.

The work actually dates back to 1998, when it was entered in the Royal Adelaide Show. The judges of the Calligraphy section thought the concept worked pretty well too and awarded it the prize!

With a whole section of this website devoted to Kid's Kites, we just had to do a page on this delightful piece of kite art—particularly when the poem is titled CHILDREN ARE LIKE KITES! Something different isn't it.

Here it is, and I've taken the liberty of adding periods (full-stops):

Children are like kites.
You run with them until you are breathless.
They crash—you add a longer tail,
they hit the rooftop—you pluck them from spouts.
You patch and comfort, adjust, and teach.
You watch them lifted by the wind
and assure them some day they’ll fly.
Finally they’re airborne
but they need more string
so you keep letting it out.
With each twist of the twine there’s
sadness and joy because the kite
becomes more distant and
you know it won’t be long before
it will snap the fine line
that has bound you together,
soar as it was meant to soar… independently free.

A slightly paraphrased version of the original poem by Erma Bombeck

Every parent would relate to most of that, wouldn't they? Also, just about everyone on the planet has seen or actually flown a simple kite at some stage in their lives.

Interestingly, another artist has taken up the idea of combining kites and calligraphy...

Patricia Lovett's page featuring a simple kite image overlaid with calligraphy describes the process and techniques involved. There's some fine art in there!

Getting Philosophical About a Toy Kite

Now, just to add a tiny philosophical point to the line becomes more distant and... 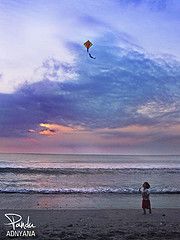 Easy flying at the beach

A good kite not only becomes more distant, it also climbs higher as line is let out. Eventually it will stop climbing, but let's not get too technical about it!

The point is, the climbing kite could represent a kid enjoying the fruits of a good upbringing. That is, reaching ever higher points in various spheres as life goes on.

Shifting to near the end of the poem... I don't know about the won't be long until it snaps the line bit! I guess it's just poetic license, but I certainly hope no kite of mine gets free any time soon. Mind you, when he was very young, my Aren was liable to toss the winder onto the grass at any time, if he had it for a while!

That brings me to one more philosophical point. A simple kite can only perform as designed when operating within the boundary set for it—the constraint of the flying line! Cut the line, and the kite will soon end up on the ground, totally unable to fly on its own.

Kids need boundaries too, according to people who know far more about the topic than I do.

Now, that last point seems to contradict the poem! However, the poem is just being creative with regard to the child "cutting the string" that holds them to their parents. Not being a textbook on kite flying, there's really nothing wrong with how the poem ends at all.

More Comments on This Simple Kite

The poem eloquently covers a lot of ground in just a few lines. Everything from toddlerhood to young adulthood! The simple kite in the display is also an interesting demonstration of the art of calligraphy.

There's more to it than just the formation of those attractive flowing characters. The sentences themselves can move around and change shape to support the concepts they are expressing.

For example, see the three lines in the closeup photo!

Also, did you notice that the words of the entire poem form a rough outline of the kite itself? Just look at that photo near the top of this page again, and imagine that the kite is removed, leaving just the words.

This provides a concrete connection between the written words and the subject matter of kites.

Finally, the variety in colors is attractive, just as a typical kid's plaything is colorful. Just one ink color would have been a bit boring here, don't you think?

Having had a 2 1/2-year-old boy myself (when this page was first written), some parts of the poem certainly resonated with me! By the time Aren leaves home, I might be relating even more to this poem.

Here's a zoomed-in view of the top of the kite, showing off some more of that fine calligraphy: 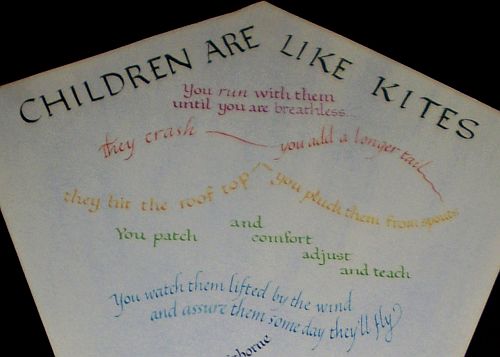