Risky but fun! I just had a fascinating little flight out on the side lawn, with the 2-Skewer Roller kite. There's about enough space for two people to swing one cat each out there, simultaneously. If you get my drift. 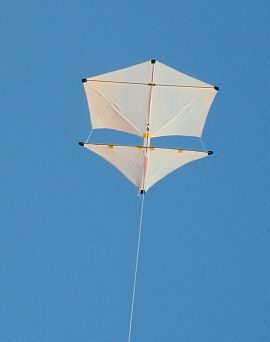 It was right at sundown, with large thick clouds lowering what was left of the late afternoon light.

After two or three attempts to pull the kite up above gutter height, on just a few meters of 20-pound Dacron, success. Now the kite was just hanging up there in the cool light breeze. Down low, the line direction had been everywhere. An occasional gentle fluttering could be heard from the trailing edges as the plastic and bamboo craft sat just above roof height, indicating a northerly wind direction.

As a distant rain squall approached from the west, the little roller rose, sank, and flitted about in the light gusts. A bird landed on the neighbor's roof and glanced at the kite. First with one eye, then with both—beak extended toward the kite.

I let out as much line as I dared. The peach tree, thorny rose bushes, and a Hills Hoist clothesline lay in wait, but were disappointed. An occasional tug on the line was required to urge the pale-orange craft back up to high line-angles.

And then small raindrops began to fall. As the shower slowly intensified I got busy winding line back on and keeping an eye on the kite's position at the same time. Soon the roller was safely back on the lawn.

It seemed the breeze was no more than 12 kph or so, although a weather site was indicating gusts to 31 kph. Meanwhile, the clouds scudding overhead from the west were going even faster.

No actual ripping of sail material occurred, but boy, did the little kite scoot around! 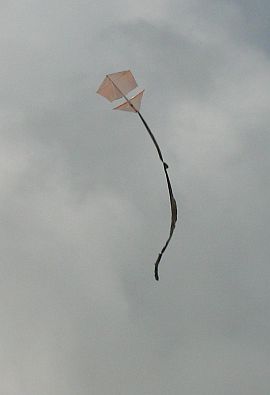 After a short session over our rooftop the other day, the kite seemed to pull left, so a side tether was tightened to correct the problem. However, in the fresher breeze down at a reserve today, it proved to be not enough. After a few minutes weaving around on just 10 meters (30 feet) or so of 20-pound line, the 1-Skewer Roller would inevitably end up on the grass—always after a fit of looping to the left. But the problem seemed minor so I just let out more line to see the kite fly higher.

A few videos were taken, since the website badly needs a decent clip of this kite in flight!

On the way out to 30 meters (100 feet) of line, I noticed a bad fray in the Dacron. It was so bad that there was a possibility that the little roller might just part the line during the strongest gusts :-| So I snapped and mended the line, while the kite was still in the air.

Up over 50 feet off the ground, the roller was straining to its limit much more often than when it was low. Faster air! One gust I measured at 27 kph, which is close to the high end of the moderate range. In no time, the tail had wound itself up, leaving a loop furthest from the kite. But that was OK since the length and sheer amount of plastic seemed to be doing its job, working against the out-of-trim problem.

I brought the kite down and tightened one tether line using another couple of half hitches. That's fiddly work out in the field, with thin 20-pound line. The kite soared up and away, to the right as expected. Unfortunately, at some point the half hitches worked loose and minutes later the little kite was back to its old tricks. Despite this, periods of lighter wind speeds allowed the roller to rise to 45-degree line angles. Even with the tiny sail area, the line was pulled almost straight every now and then.

It was great seeing the little kite soar around at high angles against the puffy white cumulus backdrop, after being left on a shelf for years. Due to the small scale, it was hard to believe just 30 meters (100 feet) of line was out though.

The breeze was a very smooth 15 kph down at the beach, according to an online weather source. And healthy puffs of breeze blew through our yard from time to time. However, the conditions were moderating quickly, as I soon found out down at the reserve.

On arrival, barely a leaf was stirring. Every few minutes, thermal activity was evident as the leaves at the tops of the trees were disturbed. This was not good, since the little 1-Skewer Roller was not a light-wind kite!

The kite had been dusted off to get some better video footage of it than what you might currently come across on the website. The early videos were quite low-res with a low frame-rate as well.

Considering the conditions it would have been better to fly the kite on polyester thread. But 20-pound Dacron would still be light enough since there would be less than 30 meters (100 feet) of length out.

The little roller responded well to tugs on the line, as I attempted to urge it up higher. Once in a while the tiny kite did find something and managed to maintain height for a few seconds (!) at a time. However, descents soon followed and they very quickly ended with the kite on the grass.

The camera was at the ready but it was nearly impossible to get a decent clip of the little kite doing its thing up there. There was simply no time. Oh for another 3 or 4 kph of average wind speed!

Eventually I gave up, but not before seeing the kite do its absolute most in the conditions. Light gusts of warm rising air were spilling across the wide grassed area every few minutes.

On the way home it was a toss-up whether to even bother writing the flights up. As usual, I bothered :-)

I think I have stuffed enough R's into that title to make it ... err roll off the tongue.

At first the little kite, just 29 cm (11 1/2 in.) from tip to tip, struggled a bit in the gusty wind-shadow of the trees. This was despite a moderate sea breeze pumping in from the shore just a few kilometers away to the west.

It's amazing how well small kites on simple bridles can cope with rather brisk air, as long as enough tail is used! In fact, after the first flight or two on 20 meters (70 feet) or so of 20-pound Dacron line, it was necessary to dig around the kite bag for some extra tail plastic.

The 2-leg bridle looked like it was adjusted fairly far forward, so I took it back a little. With an extra-long piece of thin black plastic being knotted on, the kite would still be in good trim.

On a much longer line now, the tiny orange roller shot away to the right. However, with some extra height, it straightened and soared way up to a very satisfying line angle. The long, long tail flowed out, straight as an arrow in the freshest gusts. During lulls, the kite would descend tail first, with the thin black ribbon behind taking on all sorts of graceful shapes.

On more than 60 meters (200 feet) of light flying line, the 1-Skewer Roller was a delight to watch in the bright and cloudless sky. And that was in fast-moving air that would ground many of my larger kites!

I can't even remember the last time this particular kite flew, but it sure was a good choice today.