Welcome to this fun and educational Site Blog page on kites. Appearing here...

My own Flight Report videos pop up on the MBK Facebook page nearly every week.

So, how do you subscribe to this blog page? Running your cursor over the orange RSS square down there on the right will bring up several ways to subscribe. Click/tap on whatever option is most familiar to you and you'll never miss a post! 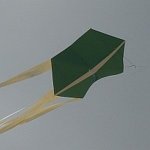 Learn how to make a paper rokkaku kite with these easy-to-follow instructions. Fully illustrated with close-up photos.

This short piece is from a Chinese government department, but illustrates how kites are part of state-sponsored culture...

Data from Weifang municipal bureau of culture and tourism showed that, as of April this year, Weifang had 331 representative intangible cultural heritage projects above the municipal level with a total of 289 representative inheritors, and those above the provincial level and their inheritors are among the top three in Shandong Province.

With solid progress made in infrastructure construction in the protected areas, traditional culture has gradually integrated into the life and production of local people, enriching the city's social development.

This previously published page gives some insight into the traditional Maori kite culture of New Zealand. 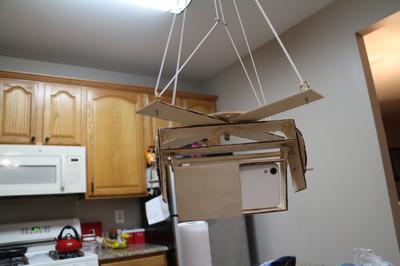 Today was my first attempt at kite aerial photography (KAP). The winds were a bit questionable all day; probably enough to fly my big ripstop Dopero, but

Scaling Sparred Kites - How Big Can You Go? 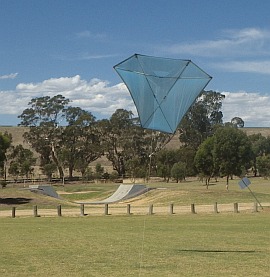 When scaling sparred kites that use solid rods for spars, just how big can you go? A fairly non-technical look at the issue, for kite-builders.

Continue reading "Scaling Sparred Kites - How Big Can You Go?"

Despite wind so light that the kite was unwilling to exceed a 30 degree line angle, it still managed to take out 90 meters (300 feet) of 20 pound Dacron...

A recent outing in an ideal breeze with this kite was disappointing. Very marginal stability was evident despite the addition of some tail weight. The craft was a rather 'quick-n-dirty' slap-together job, just to test out canard kite concepts. I had used 6mm pine dowels which were a touch heavy for the amount of sail area.

But one thing could be easily fixed...

The 2 battens positioned not far from the wing-tips were also 6mm pine. Tut tut tut! Too much wood. A far more sensible idea would be to use 2.5mm diameter bamboo skewers. At home, the skewer refit was done without delay. Now there would be no more excessive weight out near the tips :-)

A couple of days passed, with unsuitable weather for flying. That gave me plenty of time to realize that another improvement should be tried. Perhaps the small amount of sail area near the nose was a problem too, since that might be placing the CoP (Center of Pressure) too close to the CoG (Center of Gravity). That could be an easier mistake to make with canard kites than with other types! Hence I added more plastic to the upper sail, bringing it's area to about 1/4 of the main sail's area. Another approach would be to set the upper sail further away from the main sail. But not with the heavy old dowel on this kite, since the extra length would add weight :-|

A few short flights with the modified kite in the light gusts were promising. The craft was definitely stable now! Eventually I got 60 meters (200 feet) of line out and played around with many pull-ups to maximum height. Each time I would let the kite drift downwind again, taking out line, before repeating the cycle.

Curious as to whether it would tolerate a more aft towing point, I shifted the knot back by a centimeter or 2 and tried again. No problem! Line tension was a little higher, but the kite was still willing to climb. This time 90 meters (300 feet) of line went out. Oh for another 5-10kph of average wind speed though!

Bigger and better canards are on the drawing board :-)

Boy these titles are getting bad, but never mind...

Yes, it was the Skewer Star kite that braved fresh winds yesterday in the early afternoon :-) To tell the truth I was more interested in seeing how the small canard would do, but the gusts were too strong. That much was clear from firstly flying on the bridle alone and then on just a few meters of line. The small canard kite swept back and forth a few times before arcing into the grass. No damage done.

Even the Skewer Star found itself pushed to the limit in the gusts that peaked around 30kph, measured at shoulder level. This kite has always had a little quirk that would see it dive and then roll to the ground in rough air. And it happened again. Suspecting that the kite might be a touch nose-heavy, I taped a stone about the diameter of a fingernail right at the tail end of the kite. Bingo, the difference in flight was dramatic!

Every now and then, when high, the kite would dip slightly nose down. But then the weight would cause the craft to lean back again into stable flight. Nice. Although adding weight is generally the last thing I would do to an errant kite! The extra weight didn't stop the kite from going almost overhead in a patch of rising air. Some clouds with dark undersides were in the vicinity, sucking up air and boosting the gust strength.

The star stayed up for 4 minutes before it was forced down by sheer wind speed. After a re-launch, the kite came down again after a similar period. This time onto the gravel surface of the car park. Fortuitously, the breeze flipped the kite over a few times until it ended up on the grass, face down. From there I was able to simply yank it into the air again.

The final flight was quite short and it appeared that perhaps the tail weight had fallen off. But no, it turned out that a strip of sticky tape had worked loose on one side. Also, the nose area of the sail had been pushed back where the spine had speared through. Evidently, this was damage from those 2 hard landings! At home, the kite would easily be fixed with more tape and the Skewer Star will definitely fly again.

Flight Report:
Between A Rok And A Friendly Magpie

That's where I found myself late yesterday afternoon, as the ground-level breeze almost vanished. But the 2-Skewer Rokkaku powered on, up around 300 feet...

Earlier in the day there had been ample breeze. The idea was to pop out and put a 1/4-scale kite in the air to get some clues as how a much larger Canard might perform. Long story. Getting back to the Rokkaku - due to the very light breeze, this backup kite was the obvious choice!

Initially the small Rok seemed rather unstable. Odd, since this Rok has always been a great flyer. However, many months of just sitting against the wall, hanging by it's bridle might have reduced the dihedral angle somewhat. A close look seemed to confirm this. So I very carefully applied a bit of bending to the spars and joints by hand, to try and leave a little more angle in there. In the air there wasn't a whole lot of difference but at least the kite could be flown as a fighter. That is, straight-line spurts in response to tugs on the line!

For perhaps 20 minutes or so I just worked the line in and out, trying to keep the kite in the air. Sometimes the Rok would glide and at other times it would bob way over to left and right in air that could not support any continuous gain in height.

I also tried dragging the kite off the grass on a long line of at least 100 feet. Finally, after a one such launch and considerable letting out of line, I was able to contact smooth and faster-moving air at around 170 feet above ground. The Rok settled down and climbed and climbed. And that's where the magpie comes in...

The bird had noticed the tumbling block winder as I yanked 20 pound line off it during let-outs. The bird was not far away, having flown and walked right up to the winder to take a look. I decided on a whim to start making tut-tut noises to the bird, to kind of 'break the ice' :-) Funnily enough, the bird actually responded! For the next half hour, the young magpie followed me everywhere, often taking brief looks directly at me with it's binocular vision. How close would it get? About 1 1/2 meters (5 feet) it seemed.

To cap things off, after walking back to the car with block winder and kite in hand, I heard a noise as I went to turn the ignition... It was the magpie, having just landed on a dry twig on a tree that was close to the front of the car. It had to be the same bird since it was giving me that look again :-) 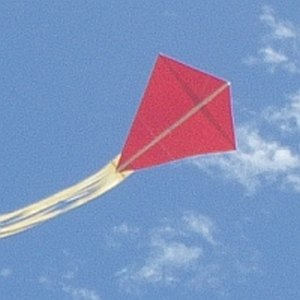 Learn how to make a paper diamond kite with these easy-to-follow instructions. Fully illustrated with close-up photos.

Bali, in SE Asia, has plenty of people, many of whom like to fly a kite now and then...

The cause of recent power outages in Bali have been traced back to kites, with state power utility PLN now calling on local residents in the province to avoid playing kites near electricity grids.

“We are urging residents not to play near the electricity grid, not only it is not safe for the individuals, it can also result in power outages and affecting other people,” Adi Priyatno, general manager of PLN distribution unit in Bali, said in a statement.

According to Adi, 74 power outages that occurred this month alone have been traced back to kite-related incidents.

On Sunday, officers from the Denpasar City Police arrested a 50-year-old kite owner who allegedly caused an explosion at a local electrical substation in South Denpasar.

“The suspect flew his kite and then left it without supervision, and because of this the kite broke from its thread and fell on the scene, resulting in the explosion and burning of one of the substations,” Jansen Avitus Panjaitan, Denpasar City Police chief, said.

June to August is known as the kite season, or musim layang-layang, here in Bali. The sight of thousands of kites being flown from different parts of the island are common during this time of the year, with kite flying being a part of Bali’s centuries-old tradition. It’s also around this time that the Bali Kite Festival is held annually, though the event has been canceled this year due to the ongoing COVID-19 pandemic.

This previously published page contains some general commentary on my experiences building various deltas from cheap and widely available materials... 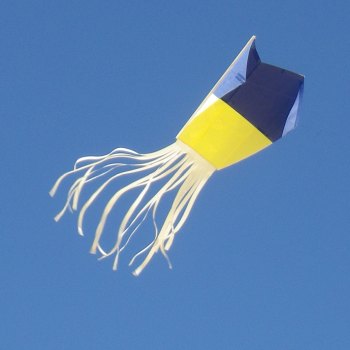 Learn how to make a paper sled kite with these easy-to-follow instructions. Fully illustrated with close-up photos.

Plenty of fun kite info, photos and videos - there's definitely too much here for only one visit! Feel free to leave your impressions of this site or just this page, below...


Back to top of page