What's the first thing you see when approaching a kite festival by car or on foot? That's right, the huge cloud of kites; you just can't miss it. What's the second thing you see? That's most probably the inflatables. 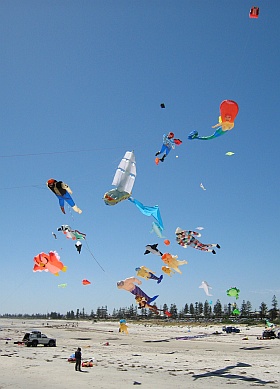 The biggest and brightest of the inflatable kites in 2008 were captured by our camera at the recent Adelaide International Kite Festival. We missed a few, since we couldn't get close to all of them.

The biggest and most complex of these spectacular air creations are real crowd pleasers. That's why they can be seen at nearly all modern Western kite festivals. I'd say more than half the objects in the sky at the Adelaide festival were inflatables of some kind.

Since it was not always obvious from the photos whether each kite was actually a functional kite, the pictures in the gallery further down this page include anything that inflated in the air.

In some photos you can see the flying line continuing upward toward the lifter kite. In these cases, the inflatable either required some assistance to stay up, or was merely a windsock, not capable of flying on its own.

We'll try to do better next year and separate out the genuine free-flying kites from the rest!

Here's a little list, summarizing a few things about the biggest inflatables we saw. They

A specific example is the Peter Lynn octopus. It's his all-time best-selling single-line inflatable, now available in four different sizes. The largest is 7 meters by 40 meters in size! It's yours, if you have £3,700 lying around somewhere! That was US$7,300 or AU$8,000 in May 2008. 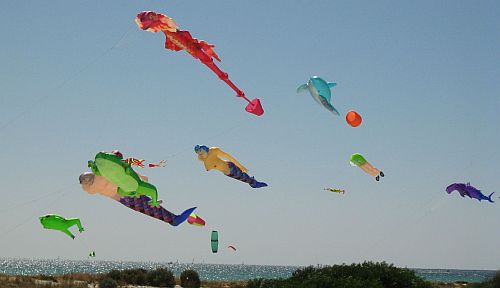 Some of the larger creature kites

The sample of photos below shows the variety of inflatable kites in 2008, at the Adelaide International Kite Festival. Although not real kites, I have to admit that some of the "line laundry" was also interesting to look at!

Some of the larger kites were anchored to heavy vehicles parked on the sand. Others, we noted, used quite large sandbags as anchor points. Why drive stakes into the ground when an empty bag is so easy to carry back home!

That big saucer-shaped kite with red and yellow on the bottom surface deserves special mention. I had a close look, and it was anchored to the beach with at least two large sand-bags. Known as the UFO inflatable, it hovered over the sand at a very low level for almost the whole festival. The reason for the low height was that its shade was often the official commentary area! The commentator sat on the sand in the shade, speaking into a radio microphone.

Here's a better look at that UFO kite: 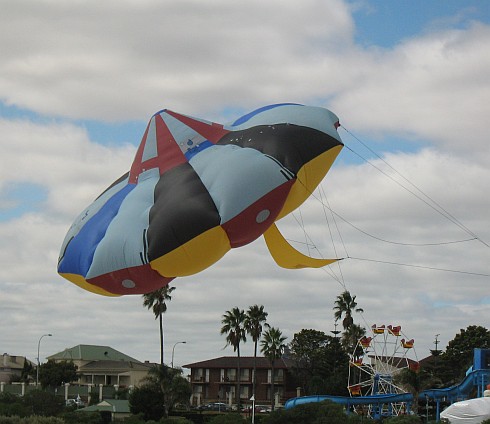 When close to the sand, it is possible to walk around inside this kite

That's it for the inflatable kites in 2008. However, you will find plenty more if you continue to explore the kite festival pages on this site.