How to Build a Dopero Kite

How to Build a Dopero Kite
Prepare to Fly 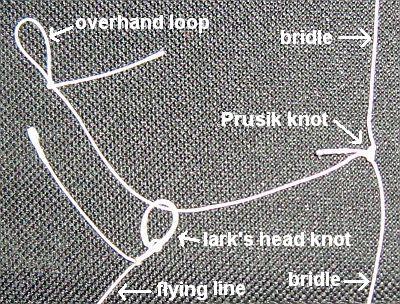 Finally, make up a flying line and attach it to the bridle with a Lark's Head knot. See the photo above.

Check those shiftable knots on the loops again. Suspend the kite from its upper bridle loop Prusik knot, checking that both tips of the upper horizontal spar come off the table at the same time. Shift the knot until this happens. Now do the same for the lower bridle loop Prusik knot, this time observing the tips of the lower horizontal spar. All square now?

As a final check, lift the kite by the loop knot right at the end of the bridle. Shift the Prusik knot along the central bridle line until the kite hangs at about a 30-degree angle from the horizontal.

Also lift the kite with a finger under the nose and a finger under the tail, balancing it on the central crease line in the plastic. Try this a few times, and if it's clear that one side of the kite is heavier, add small bits of electrical tape to the spar caps on the lighter side, to balance it up.

How to Build a Dopero Kite
Flying! 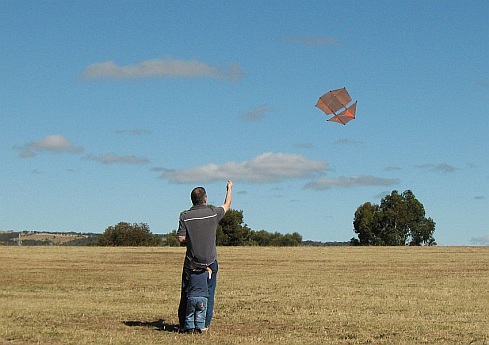 The picture up there shows the MBK 2-Skewer Dopero kite being launched, down at a local flying field. The pint-sized support crew is ready to swing into action at a moment's notice—if I don't catch him first!

Assuming there is some breeze outside, just dangle the kite at arm's length until the wind catches it. As long as you feel the kite pulling, let out line slowly by letting it slip through your fingers. If it refuses to climb despite pulling on your hand, shift the Prusik knot towards the nose a bit, and try again. Keep going until the kite behaves itself!

Another approach is to get a helper to hold the kite up and let it go, with maybe 10 or 20 meters of line let out. This way, the kite soon gets high enough to make it easy to let more line out.

Dopero-kite stories of my real-life flying experiences are worth checking out!

Finally, if the kite doesn't seem stable enough, looping around in both directions even in light wind, just add a simple short tail to each vertical spar and try again. However, if you have put the correct dihedral in both spars, this should not be necessary!

If the kite flies OK, but tends to hang to the left or right, try shifting the sliding knot on the upper bridle loop. Make very small adjustments until the kite flies noticeably better.

Note: If you have seen the plans page for this kite, you will see there are two extra reinforcers on the joints of the upper horizontal spar. If the glue you are using can't hold the correct dihedral angle, it's easy to add the two extra small pieces of bamboo later, after a bit of test flying.

Have fun flying, and I hope you've enjoyed learning how to how to build a dopero kite.

Now, just in case you have actually made and flown this kite at least once already:

Flight Reports From Other Visitors

Click below to read about various kite-flying adventures, contributed by other visitors to this page...

Watch Your Knuckles
Grandson and I had built a few Dopero kites to fly, but the weather was either too bad or no wind. So the other day it was about 20 degrees F. with a fairly …

A 2-Skewer Dopero Takes to the Sky
There's always a certain feeling of trepidation when you've spent a week or more on a project, and then crunch time comes. Especially when 'crunch' is …