At the Adelaide Int. Kite Festival

As in previous years, there were some really great kites in 2008. Hence we've decided to put up a page devoted just to the select few that really caught our attention!

Have you not had anything to do with kites since you put up a crude brown-paper-and-string thing in your childhood? Prepare to be awestruck at the lengths kite designers go to these days!

The photos on this page are deliberately quite big, in order to show as much detail as possible. Hence this page might load into your browser a little slower than you might expect. Here are some of the great kites in 2008 that we saw. 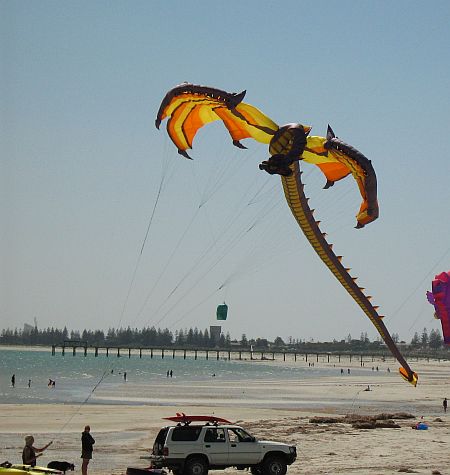 This was my personal favorite to look at, although I would never think of owning or flying one of these. I snapped off three frames on our camera while this air creation rose majestically from the sand. Truly, it was one of the great kites in 2008 at the Adelaide kite festival! The color and detail was just stunning, not to mention the sheer length of this beautiful inflatable. It's amazing that these can be designed and bridled to keep their shape and fly as a fully functional kite—not like "line laundry" creations which merely hang off another kite's flying line! 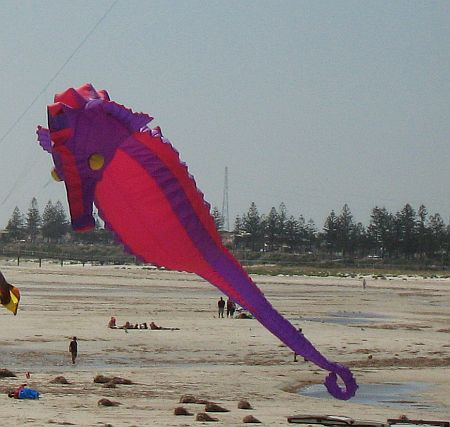 Some of the comments about the dragon apply to this creation as well. The sheer size of the sea-horse is impressive, as it sits upright in the air, fully inflated. The photo shows it tilted forward quite a bit, but I do remember it sitting completely upright. This gives a much better impression, since that's how real sea-horses appear in a fish tank!

The interesting thing about this design is its form or shape, rather than any fancy detail in terms of pattern or coloring. From the refining of the initial concept, through to the final cutting, sewing and testing, hundreds of hours can go into the production of this kind of kite. All those complex shapes require a lot of small flat panels! 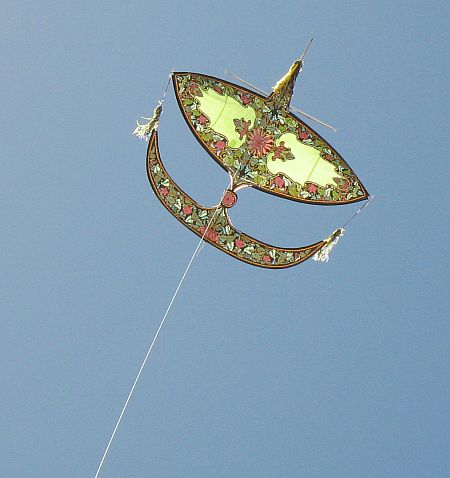 Wau is pronounced wow, which happens to be absolutely appropriate in this case! This traditional design was a spectacular and unusual sight among all the other mainly Western designs in the sky. It's another example of great kites in 2008 at the festival. In terms of Western kite design, it has similarities to the Pearson roller, with its large upper and smaller lower sails. However, the curved outlines of the wau's sails make it quite distinctive. It could never be confused with a roller! Also, if you know a bit about kites, the horizontal spars are bowed like a rok rather than constructed with dihedral.

Apparently, every province in Malaysia has a variation on the wau. I was surprised at the efficiency of this kite, since it managed to hold higher line angles than most others in the sky! That includes large deltas which are known for their high flying angle. Occasionally, the wau was upset by rough air, and we saw it gently spear into the dunes at one stage. It was undamaged and was soon relaunched.

The Malaysian kite master who was doing the flying had another large wau as well, which seemed to be there as a backup. This expert and his wife, also an expert I believe, were sponsored by Malaysian Airlines to attend the festival. They brought with them a number of small non-flying display versions of the wau for sale. Just like in China, it seems that Malaysian kites have been used for both art and recreation, for centuries. 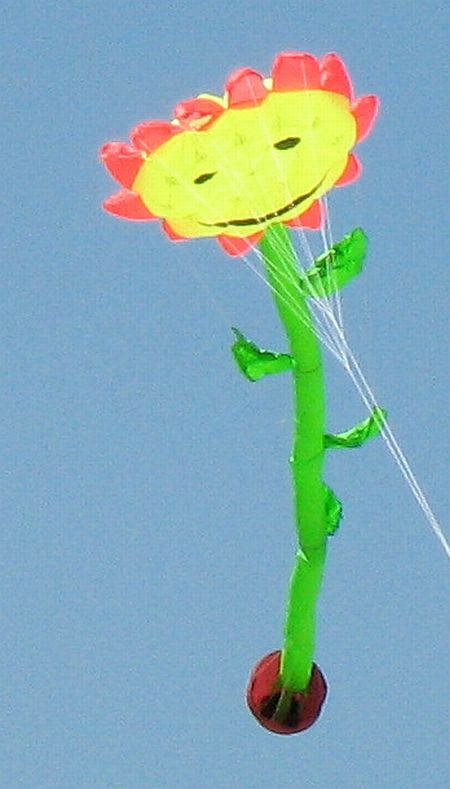 This kite was a captivating sight because it had an element of humor. It was a flying sunflower, complete with stem, leaves and pot! The clever thing about it was how every part fitted perfectly with a standard piece of kite structure.

The face of the flower was flat and lent itself to working like any flat kite. The stem was long, flexible and thin, hence functioned naturally as a tail. Finally, the pot was very close to the shape of a drogue and worked perfectly, adding extra drag and hence directional stability to the whole piece. All in all, it was a kite to make you smile! Perhaps it was helped by the fact the sunflower was smiling back at you too...

Although attached to another kite's flying line, it appears that the sunflower is capable of flying by itself. Otherwise, it wouldn't be featured here as one of the great kites in 2008!

Two More Seen but not Photographed

Finally, special mention must go to a couple of other flying creations that we'll try to get decent photos of next year perhaps!

Somebody had an extremely realistic white-pointer shark inflatable aloft, on at least one of the flying days of the festival. Not only were the outlines, shape, and coloring just like the real thing, this "creature" swam very convincingly in the air!

Also, there was an eye-catching fan design. In a way, this was similar to the sunflower in that the designer had a non-flying object in mind. However, there was nothing funny about the fan. It was simply an exquisite piece of flying art! Its small size compared to many of the other kites did not seem to take away from this quality. The sail was constructed like an actual oriental fan. It wasn't just a nice picture on a flat sail.

That's it for now on the great kites in 2008 that stood out to us. Next year, we will probably use an even better camera to zoom in on many more individual kites as they decorate the sky above Semaphore.