Perhaps you have seen some truly giant kites at a festival. Whether it's a super-long dragon kite or a huge inflatable show kite, they certainly are attention grabbers! 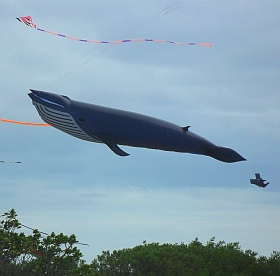 Blue-whale kite we saw at a festival

The photo shows probably the biggest inflatable kite we have personally seen at a festival. Very appropriately, it is based on the blue whale, the largest mammal on the planet.

This style of inflatable is not a true kite in the sense that it cannot hold a positive line angle all by itself. Just out of the picture is the lifter or pilot kite which steadies the giant inflatable as it is suspended from the flying line. If you look very carefully at the image you might be able to spot the  flying line heading up at a 45-degree angle from near the whale's nose.

For the rest of this page, I have decided to seek out and share some details on three exceptional kite classes. And from each class, one kite in particular is highlighted. Each of these is truly large in its own way:

It's all pretty relative. I started making a range of tiny kites from bamboo BBQ skewers, quite some years ago. Then I doubled the spans by using two skewers butted together, for another series of kites. These had spans of 58 cm (11 1/2 in.)

Later, I doubled the spans yet again, to 1.2 meters (4 feet) using 5 mm Tasmanian-oak dowels. By now I felt the kites were quite impressive in size!

Finally, the time seemed right to come out with ... you guessed it ... Multi-Dowel kites with the spans doubled yet again to 2.4 meters (8 feet). This is closer to most people's idea of a "big" single-liner for personal recreation.

There were three of these in existence in 2009, as far as I know. Undoubtedly, some multi-millionaires somewhere have put several more on order since then!

All these giant kites are identical, apart from the decorative work. All have flown at least once at an international kite festival. The first picture down there is of the Mega-Moon, which was made for a Japanese owner.

Airborne, one of these kites appears much like a giant mattress, sedately floating at a modest height off the ground. The construction concept does not look complex from a distance, with the kite looking similar to a flat parafoil with all the internal cell divisions missing. Instead, the bridle lines go right through and anchor the upper surface to the lower surface. The reason for this arrangement is that the flying kite can shift around while the internal air tends to stay stationary. This improves stability since that big volume of air does have a significant mass. 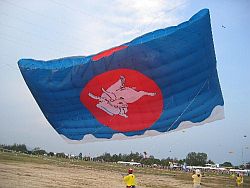 With a surface area of about 900 square meters (10,000 square feet) each and a sizable gap between the top and bottom surfaces, I would say that these giant kites also take the record for sheer volume as well!

On the topic of figures, here are a few:

All three mega kites, the American Mega-Flag, Japanese Mega-Moon, and Kuwait's Al-Farsi Mega-Kite have flown at the same time on at least one occasion. Despite the great size, these kites only require modest wind strengths of about 12 kph and up to fly successfully.

So, have Peter Lynn Kites just been satisfied with those three mega-kites? Heck no! Guess what the latest is...

An even larger flag kite was tested in France in 2018. Called The Hope, this 1,250-square-meter monster has a massive ribbon tail from the trailing edge and is capable of true single-line flying. You see, the other small :-) flag kites required side-lines with active handling to keep the kite on an even keel. OK, it's keelless, but you know what I mean! 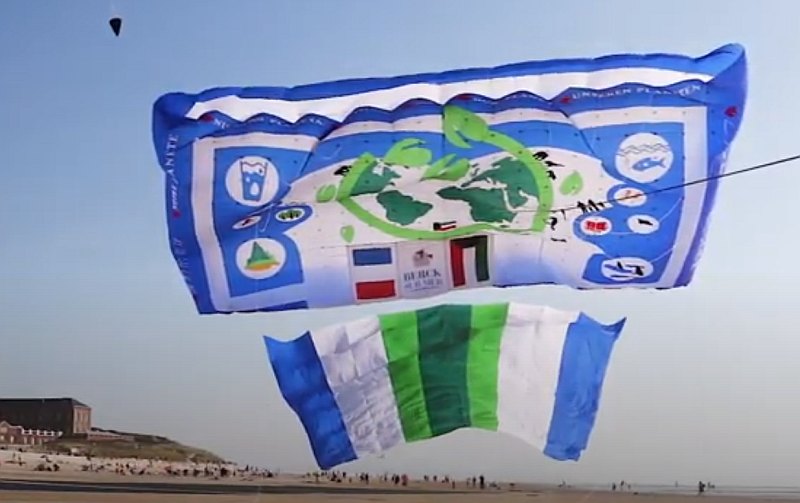 As you can imagine, it's quite a job to put together, transport, and operate these amazing kites. Construction takes months, and many people are involved in unpacking and launching during flying attempts.

Just how far will this company push the limits? Time will tell.

Previously, the honor of being "the world's longest kite" probably went to one of the many massive dragon kites which have been made in China for centuries.

However, since June 2008, another incredible kite has taken out the title—Zhang Tengyun's Bee kite!

The Chinese specialize in the centipede style, where a large number of smaller kites are strung together to form a long tail. This Bee kite might just as easily fall into the "kite train" category though, since from the pictures I saw, the kites are connected with just the one flying line.

See how this amazing creation floats away into the distance, in that photo! The individual small kites each represent a bee, being a somewhat stylized design with yellow body and two green "wings."

Anyway, those details aside, this flying creation is immensely long, at no less than 3,500 meters! That's 3.5 kilometers (about 2 miles). That's probably further than some people travel in their car to the local shops haha! 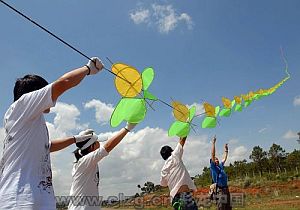 Can you believe it—2034 individual kites
Photo courtesy of china.org.cn

Again, here are some figures:

The construction and flight of this kite were part of the Chinese celebrations at hosting the 2008 Olympics.

In fact, the first 26 kites on the line represent the 26 ethnic groups in Yunnan Province, where the successful second flight occurred. The remaining 2,008 kites represent the year of the Games in Beijing.

The Giant Kites of Sagami, Japan

To me, the most interesting thing about these kites is that the entire huge sail is made from hand-made Japanese paper! For one thing, that would seem to be a pretty delicate material for such a huge kite. Mind you, for its thickness, this type of paper is supposed to be very strong.

Also, can you imagine the hours required to just make enough paper for one of these massive bowed kites! On the topic of "massive," is it any wonder they weigh as much as they do. See the list of figures further down.

Traditionally, a large kite is flown each year at the Sagami Giant Kite Festival. This event is held on May 4th and 5th in Sagamihara City, Kanagawa Prefecture, Japan.

Do you think that your local kite festival has a fairly long history? It probably pales in comparison to the Sagami festival. This event is a tradition that has been held since the Tenpou period (around 1830!) in the Edo era. I wonder if anyone has added up the total number of square meters of paper used in the sails of these giant kites over those years. 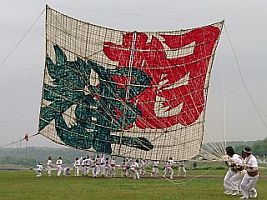 Here are some figures for the largest example, named Shindo:

In 2001, a Shindo set a duration record for these traditional giant kites. The mammoth structure stayed airborne for no less than 6 hours and 7 minutes. That would add up to a lot of tired arms, unless the flying crew changed shifts a few times!

Below is an impressive view of another one of these giant kites. 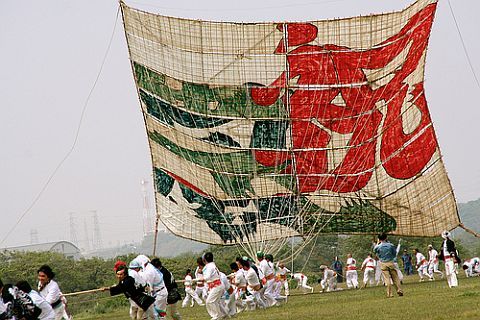