Of the flowform kites in 2008 that we saw, none really stood out as artistic masterpieces. That's not surprising really, since these kites could be called the "work horses of the sky." This page features some nice parafoils as well. Parafoils are not as deep as flowforms, and the cells are closed at the downwind end.

At any kite festival, the flowforms are always there but not necessarily attracting much attention. Their job is hoisting large inflatable windsocks and other assorted line laundry or helping to stabilize inflatable kites. Sometimes, you can spot an attractive flowform kite being flown on its own, like any other recreational kite. 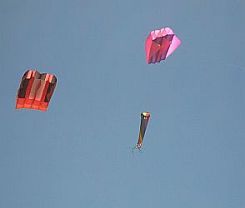 The two kites in the photo are typical, although the picture doesn't give you much clue as to how big they are. Many of these are quite large. The bigger the kite, the bigger the pull and the more stuff you can hang off the line! Also, it's very common to see these flying without tails, like the kite on the left in the photo. A tail might be added just for effect or perhaps to give a bit more stability in stronger wind conditions.

On the topic of flying tailless, we saw what can happen when the wind picks up. A large flowform, with laundry attached, looped several times until coming down in the dunes! We didn't notice if they gave up for the day or tried again with a tail.

Most flowforms are fairly large, although the Sutton range offers quite a big choice in size. The smallest can be handled by one person just for fun, while the largest get serious work to do. And they pull like an elephant, in a stiff breeze!

Occasionally, a big one might be seen hoisting a camera rig for aerial photography. Some of the very best kite-festival photos are taken from the air like this. We didn't see any of the flowform kites in 2008 being used in this way.

Here's a small photo gallery of some of the flowform kites in 2008, at the Adelaide kite festival. The blurry or grainy pictures are due to distance from the kite, either horizontally, vertically, or both. Some of these craft were right at the top of the kite cloud! 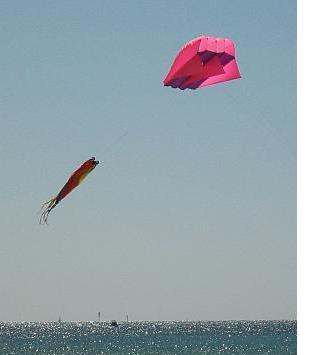 I'll make a few comments on each kite.

First, the pink flowform has an unusual tail. At first sight, it looked like someone decided to hitch on a "squid" windsock instead of a more conventional streamer or tube tail! However, on looking carefully at another photo of the same kite, the windsock turned out to be a long drogue.

Still, it's a bit unusual with those tentacle things flapping around at the back end! It looks like it would produce plenty of drag.

There are four cells and three keels on this kite. Going by the flowform kites we saw, it appears that this is quite a popular configuration. 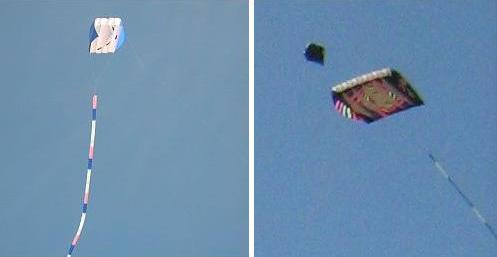 On the left is another flowform with that same configuration, that is four cells and three keels. This one is tastefully matched with a narrow tube tail. What you probably can't pick out from this down-sized photo is the line of marching ants on the white underside! Those four black marks are ants, which are clearly visible in the original photo. It was a slightly humorous and artistic touch not often seen on this kind of kite.

To the right there's a picture of a flat, wide parafoil which seems to have 10 cells if I've counted them correctly. This one was a good distance away, and maybe there's a bit of motion blur as well. Even harder to pick is how many keels it has! My guess is that there are three—one on each side plus a tiny one right in the middle. And what's that in the background? A UKO I reckon—an Unidentified Kiting Object! Maybe it drops little green teddies.

Brought together from separate parts of one large photo

On the left there is a yellow flowform. This one isn't huge, and its outer two cells seem to be tipped on their sides, making it look a little like an inflatable-spar sled. But if you look carefully, you can see it really is a two-surface flowform with four cells and three keels. There's that configuration again!

The middle photo features a crisp-looking kite which doubles as a Japanese flag! The red rising sun stands out against a pearly white background. This parafoil is fairly complex, with eight cells and no less than five keels!

Finally, there's that ugly dotted pink thing, on the right. Gee, I hope that doesn't get back to the owner... Sorry mate (or miss, ms), it's just my personal opinion! The image is poor since I blew it up from a much bigger photo, so it's hard to tell its exact configuration. It could be a four-cell design, like a few of the other flowform kites on the day. Interestingly, this kite has twin drogues, which are handy since they are much more compact than tails.

I'll just make a note about the kicking soccer legs kite from last year. How could we miss noticing it up there again this time! Although we didn't get a photo... With the lighter winds this time around, the kite was being flown without the soccer ball drogue.

That's it for the flowform kites in 2008. Next year we'll take a slightly different angle, you'll see!