Successful Test in a Cold Breeze

The Dowel Roller kite is finally proven, after a test flight in trying conditions! After making a new version and shifting its balance point to the rear a little, we finally had a stable kite. However, cold wet weather had closed in and more was forecast for several days to come. Despite this, there was a sunny patch this afternoon so we ventured out to try and get some photos of the roller. 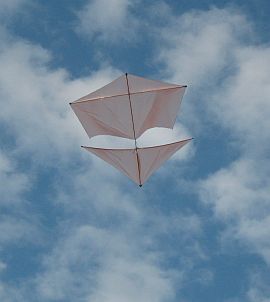 On the way to the reserve, things seemed promising with only slight movement in the treetops.

By the time the roller was set up on the ground, it was clear that the average wind strength was in fact a bit high.

Fresh gusts were coming through.

A layer of dark cumulus scraps scudded by to the east, showing up the brisk breezes up around 2000 feet or so. These were just remnants of rain clouds, against a backdrop of much higher stratocumulus which glistened white in the sunlight.

One of the sail ties kept coming undone as I tried to reattach it. I resolved to change the ties later and use small loop knots to hold the slip knots, instead of the simple double knots.

Eventually, the Dowel Roller kite was ready and it was easily launched in the next gust that came through.

The air was rough! The kite would sometimes suffer a sudden drop in wind speed. Next would come a tailslide as the kite lost a few meters of height and then recovered.

Down low, the lulls would not have enough wind speed to keep the kite airborne, but higher up the wintry gusts would test the kite to its limits, occasionally bending the horizontal spars beyond the fixed amount of bow. That is, the bow strings would go slack! At these times, the trailing edge of the upper sail would flutter furiously, as if the kite was grumbling about the excess wind speed.

Despite the trying conditions, the Dowel Roller did pretty well. Once or twice the kite was forced to the ground in a large loop.

Eventually, I managed to let about 50 meters of line out. The kite then used a large amount of sky, hunting far to the right and left, and occasionally up to a steeper line angle when the wind eased a little.

I'm sure we'll get some much more satisfying flights from the Dowel Roller kite when the weather is more ideal. In the meantime, it's nice to know that it is stable and has pretty respectable performance.