Winds appeared fairly light outside, just nice for the Dowel Roller kite. There didn't seem much possibility of rain despite all the cloud cover, so out we went. 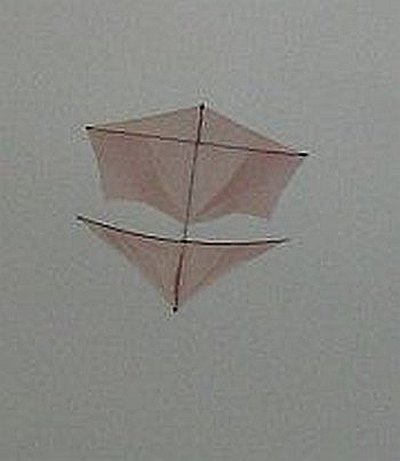 Before long, Aren and I were out on the grass at the Wilfred Taylor Reserve, rigging the roller for what would hopefully be a high flight.

The bridle is rather long on this kite and today it chose to get itself in a tangle. Hence I spent about two minutes rigging the kite and maybe 10 untangling the bridle! Grr.

Finally, the bridle was sorted, and the roller spent the next few minutes going up and down on a short line. There was just not enough wind at ground level for a hand launch.

No problem. I just walked halfway across the reserve with the kite, letting the line slip off the winder, which was on the grass next to the pram.

Then, a slow jog back to the pram with line slipping through my fingers enabled the Dowel Roller kite to steadily rise to around 60 or 70 feet.

From there, it was possible to work the line a little and coax the roller up higher in the more consistent light breeze up at that height.

At this point, we needed to move to one side of the reserve to gain more room to fly. No tree or power line is going to eat this kite today! Up on the end of 60 meters of line, the roller was flying in ideal winds.

At last, this kite was having a good easy flight! Its efficiency is modest, rather similar to a diamond kite, hanging at around 50 to 55 degrees of line angle. From time to time, the roller tracked off to the left or right, as the wind shifted slightly in direction.

Wind strength varied from minute to minute, changing the line tension from light to firm and back again. Aren could hang on OK, even when it was fairly firm. This was handy, as I took some video and a couple of photos! Image quality is down a bit, due to the height of the kite and the low-light conditions. It was an almost overcast sky, in late afternoon.

Things were going so well, why not let out some more line? So we did, first reaching the 90-meter marker on the line, spending a few minutes there, then on to the 120-meter marker. During each climb, the Dowel Roller kite maintained about a 40-degree line angle, climbing back up to 55 degrees again at the end of each climb.

The roller found slightly faster air up there, not surprisingly. At times, it approached its limit, forcing it over into a shallow dive to the left. After losing a lot of height, it would recover and climb straight back up in the following lull.

Gradually we brought the Dowel Roller kite back down. Aren helped by sometimes pulling in line so I could wind on without tension in the line. Otherwise, I just pulled line onto the ground, then wound on without tension—while still flying with my winding hand!

"Necessity is the mother of invention."

With the kite down after a very satisfying flight, we drove home as sunset approached. Oh, almost forgot—I discovered there is no need to remove the Lark's Head knot from the keel! Just pull enough of the bridle through when removing the vertical spar, to allow the usual placement of the spar before rolling up the kite! That's one less thing to do when rigging and de-rigging the Dowel Roller kite.