Aren't bird-shaped kites great! I'll never forget heading off down the jetty at a local kite festival one day and catching sight of a seagull swooping low among some of the nearest kites.

For just a moment, I actually thought the pearly white bird with orange beak was a kite! The gull had wings outstretched and was not flapping at the time, which enhanced the illusion.

A bit of a trawl through our archives of kite-festival photos yielded a surprising variety of designs that were based on bird species. In the sections below there are a few photos, with comments on each, regarding construction and flying characteristics.

Further down, I have provided some info on where all these designs are coming from.

Isn't this one a real beauty! Walking up over a sand dune toward the jetty, this eye-catching bird-shaped kite came into view. It was flying low but steady as anything and was tethered near the other side of the jetty.

I just couldn't resist pulling out the camera. 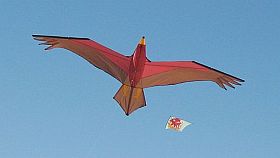 "Bird" hovers low over the jetty

If you look carefully near the tail, you can see some solid spars holding the shape. They could be dowel, since anything fancier would surely be a bit thinner. The body is 3D, with some sort of smooth shell covered in the sail material. You can also see dowel spars through the sail material of the wings.

A really nice touch is the addition of wingtip feathers. In real life, these give eagles and hawks a performance boost by reducing drag forces. Thus the wing becomes more efficient.

Some reading on the topic of these kinds of kites gave me the impression they are not always successful flyers! You have to wonder what the history of the pictured kite was. How many prototypes were modified or scrapped before this one took off and really proved its airworthiness?

An update: I have now met the owner. Apparently this kite was his first construction attempt ever! Remarkable.

This kite features fiberglass spars and quite realistic artwork on the sail fabric. 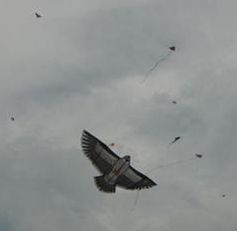 On a trip to Singapore to meet with relatives there, I discovered that my brother-in-law Terry had bought this fine-looking kite. Near the end of our stay, we got a chance to go to a local flying spot and put the kite up. There it is in the photo, sharing the sky with numerous other kites of all descriptions.

Plenty of bird-shaped kites and deltas were aloft! In fact, up near the top-left edge of the photo, I'm fairly sure the high-flying kite was another identical light-wind eagle. It must be popular!

The photo isn't the greatest, but the printed design on the kite fabric is very realistic—almost photo-realistic from a distance. The material would be ripstop nylon or perhaps polyester.

Construction was different to anything I had ever seen, with a long bowed fiberglass rod holding the wings outstretched. In flight, this resulted in a kind of soggy feel, somewhat like many store-bought deltas. In other words, any sudden increase in line tension would tend to get absorbed by the kite, before it wallowed upward in response. More rigid kites tend to zip rather than wallow!

This eagle kite proved a little tricky low down, becoming more stable at higher line angles and of course in the smoother air up higher. But we had fun, in the very light, shifty winds on the coast of Singapore. And there's another characteristic worth mentioning... Above a certain wind speed, this kite actually started to flap quite realistically! 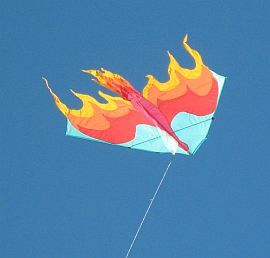 Now, if you have trawled around this site quite a bit over the years, you have probably bumped into that photo before.

It's an example of a delta kite dressed up as a bird—a bit fake near the nose, where it's just painted on, but getting fancier along the trailing edge!

See how the flames dance in the wind, and the bird actually has a flaming tail too.

The delta's sail is a light sky-blue. This would be to hide it against the sky I guess, to heighten the flaming-bird illusion! Or perhaps not, since clear plastic would do an even better job of that.

It's a really nice delta kite if you ask me, with pretty standard construction. That is, with the floating leading-edge spars and rigid spreader. 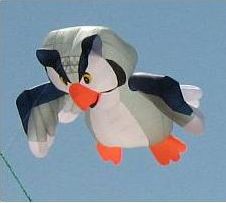 This is funny or cute or something. Whatever it is, this kite is another eye-turner. It's quite a good size but doesn't compare with the biggest of the kite-festival inflatable giants. Does it belong with the other bird-shaped kites on this page?

Well, owls are birds, so it seems logical enough to me! To take the analogy further, owls are very quiet in the air, as are most single-line kites. Alright, alright, moving on...

This kite looks good from a long distance because of the bold shapes and colors used in its construction. No spars are used of course, just cleverly designed openings on the upwind side to keep the shape inflated and generating a modest amount of lift to keep the kite off the sand. 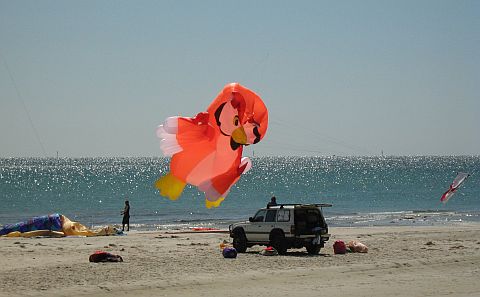 And another owl, on the same day

There's another inflatable owl kite. Compared to the other one, it's not quite as striking design-wise, in my humble opinion. But perhaps it was more visible due to the choice of Day-Glo orange!

I'm not sure about this, but it might have been a lot bigger than the other owl up there, too. That four-wheel-drive vehicle parked on the sand was there as an anchor for a truly enormous dragon show kite!

Flying a bird-shaped kite is a very old idea. That doesn't stop Chinese kite-makers and others from turning out endless variations! 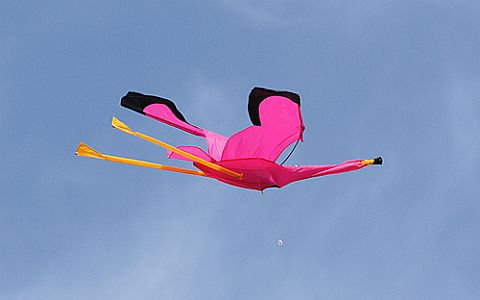 In 2010, you were most likely to find these kinds of kites for sale from

And things don't seem to have changed much since! The kite scene moves slower than hi-tech.

2D designs are more-or-less flat kites which have an outline resembling a bird. Hawks and eagles are popular, since they are soaring birds. An image of that bird is applied to the sail. This could be hand painted in a remote village or the result of the latest material-printing technology in a factory. The main thing is, when in flight, there is no mistaking what it is supposed to be!

3D designs go a bit further to represent a living bird more accurately, by molding the shape of the head and body. Some examples even attempt to copy the flapping motion of the bird in flight! Interestingly, even some ancient Chinese kites fall into this rather clever category.

Designing kites to look like birds is an idea that pops up in many, if not most, kite-flying cultures. Even if it's just an image of a bird or bird's head on a large flat kite of some type. Ok, I guess that's a third category!

The attraction is obvious. It looks like a bird, birds fly extremely well, so hopefully so does the kite.

That pink thing in the photo is a somewhat comical example, which seems to be flying quite successfully without a long flowing tail.

This small island in Indonesia, just to the northwest of Australia, is home to a thriving artistic community. Wares from this location are widely available online. I happened to pick up an unclaimed eagle kite during a club storage clean-out—there it is below. More than just a bird-shaped kite, it's a lot like a real eagle wouldn't you say. 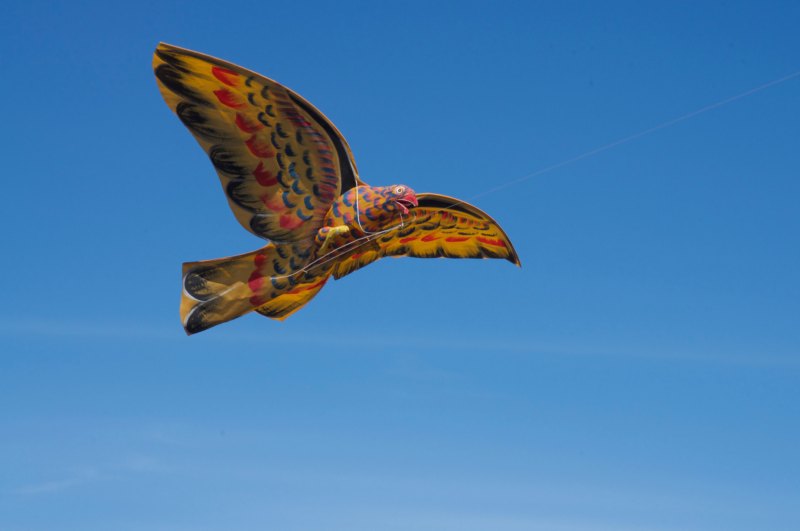 Kites of various birds in 2D and 3D are a popular choice for the artisans, who make them collapsible for transport. These are made in large numbers and are also known as "tourist kites," since most of them leave Bali in the cargo holds of commercial aircraft! The artwork is typically very vivid and colorful. Like many Chinese creature kites, the Balinese manage to achieve almost photorealistic results with their hand-painted decoration.

Parachute fabric is used to cover the bamboo frames for many of the tourist kites in Bali. Rayon or nylon from other sources is also used.

Of course, this is just one tiny category in the enormous range of traditional Chinese kite types.

The outline of the head, wings, and tail are constructed from thin strips of bamboo. These are expertly formed into the required curves to match the outline and attached with glue.

Most of these bird-shaped kites seem to be 2D, although with details such as the head and claws cleverly painted to look 3D from a distance.

Dozens and sometimes hundreds of people at a time gather in one spot to fly kites, in many Chinese cities. In good weather, parks, reserves, and other open spaces fill with people of all ages enjoying the relaxing hobby of flying single-liners.

These are mainly aimed at children and most are probably not great flyers by traditional standards. We've seen one of these occasionally but usually not flying at any great height! No doubt some are better than others. If it flies at all, in a moderate breeze, the kite is probably doing a good job from a child's perspective!

These kites typically use nylon spars and also nylon cloth for the sails. Sometimes Tyvek, another durable modern material, is used for the sails. Mass-production techniques are used for applying colors and patterns to the sails. Often, tails are required for stability, and these are designed to appeal visually to the kids as well.