Oldest in the USA!

What's more, the Zilker Kite Festival is the longest continuously running kite festival in the United States. Since the event runs in Austin, Texas, how did it get that name?

The answer goes right back to 1917, when one Andrew Jackson Zilker donated a parcel of land to the city, near the southern region. The area became a public park in the 1930s and is now known as the Zilker Metropolitan Park or just Zilker Park. It's huge, at 142 ha (350 acres)!

One day in the not-too-distant future, the sequential number of this event will tick over to three digits. In 2011 it had reached 83 consecutive events! Wow.

The Exchange Club of Austin oversees the event these days and since the Millennium has seen it grow a lot in size and scope. At this writing, it runs on the first weekend in March each year. In fact, the event is also known as the Austin Kite Festival.

Booths scattered around the venue sell all kinds of items, including food, T-shirts, and of course, kites. The proceeds go to programs designed to prevent child abuse, helping abuse victims, and awarding scholarships to high-school students.

Being inland, the Zilker Kite Festival has quite a different "look and feel" to a typical beach festival—like the international Adelaide event at Semaphore Beach that we like to attend most years, here in South Australia. 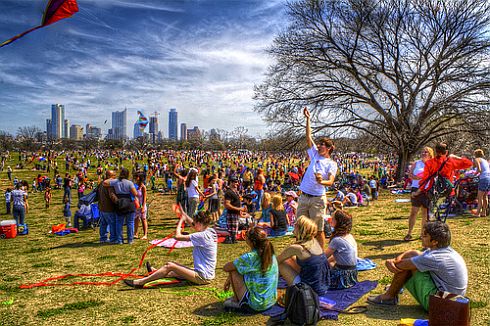 This notable kiting event attracts thousands of kite flyers and onlookers each and every year! So it's not surprising that a few individuals who have blogs faithfully post on their experiences at the festival. I've waded through quite a few photos and videos from such posts, in order to boil it all down a bit for you.

The Zilker Kite Festival is one of the very largest public events put on by the city of Austin. Someone has even started a Facebook page for the festival!

From bloggers' photos it is clear that 100s of kites take to the air simultaneously on a typical day. I don't know about thousands as is sometimes described. Only a minority of those present are actually holding the string of a flying kite, from what I've seen.

One wide photo had nearly 100 kite images that could be counted, but that would still have been only a fraction of the total number in the air.

Another photo clearly shows the backdrop of hi-rise buildings in the southern area of Austin.

A mention of the "masses of people" or some similar phrase commonly pops up in posts. From looking at a variety of photos of the event, that was certainly my impression too. In fact, the whole event comes across as "by the public, for the public." The Zilker Kite Festival contrasts with many international events, which are more of a big show featuring big kites that is put on for masses of spectators. Public flying is usually included. However, to use a circus analogy, it's a kind of side-ring act to "the big stuff"!

Videos from the Zilker Kite Festival

From at least as far back as 2007 there have been a number of videos online which give a glimpse into the event. If you're searching, remember that the event might just as easily be found under Austin Kite Festival. Here's some notes on a few of these, starting from 2011 and working back. The thing about capturing kites with a camera is that most of them end up as far-away dots in the sky! But occasionally, something happens to be close enough to get a good glimpse.

Now, if I was going to this event, those first two categories would look inviting! It was all about the flight of kites for me. But how about you? Can you imagine one of your creations winning in one of the following categories?

These two were taken by photography enthusiasts who publish their work on Flikr. Not your usual kite-festival shots,  these images emphasize "the people and their kites." Look carefully and you will see quite a number of kite types I haven't even mentioned on this page so far ... errrrm ... on the other hand, perhaps don't worry about it—not everyone is a kite-classification junkie like me ;-) 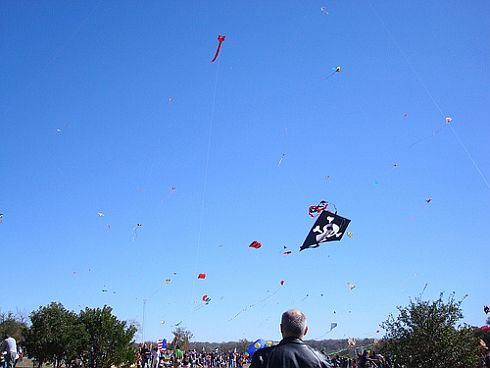 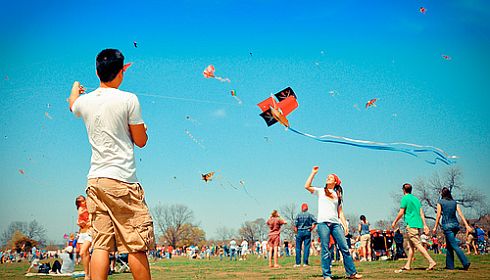