The idea of a homemade wind-speed meter must surely cross the mind of avid kite-flyers from time to time! Here are my own ideas and musings, after a quick look at one retail wind meter in particular. Have you noticed that quality meters and weather-data loggers are quite expensive? There's not much out there under US$150. 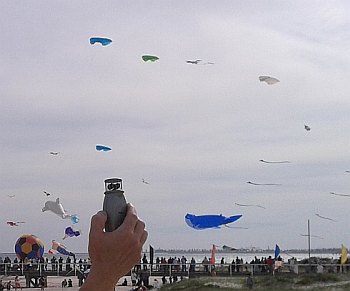 Also called the anemometer (try saying that quickly!) or wind gauge, this kind of device is handy for a wide range of wind-powered sports. Some of these sports could be rather demanding on such a device, since it could be bumped or splashed with water. Or worse!

However, good old single-line kiting would have to be one of the safest environments for a wind-speed meter. In comparison to many other sports and hobbies, that is. Flying a kite is generally quite a genteel activity. Wouldn't you agree?

Before diving into some ideas for homemade devices, I have to admit that I don't actually use one that was made at home! You see, a jolly red-coated gentleman with white beard supplied me with a you-beaut (Aussie expression) Windtronic 2 anemometer on the 25th of December quite a few years ago. However, before this ... ermmm windfall ... I certainly was considering making one for myself.

Of course, to calibrate any one of these devices, it would be necessary to hold it out the window of a moving car, at various speeds. Over here in Adelaide, South Australia, an appropriate approach might be to mark the scale in 5 kph intervals. Make that 5 mph in the USA.

In fact, to do a really good job of it, it would be an idea to drive down a road in one direction using, say, a blue pencil. Then drive the other way, making all the marks in red. Permanent marks could then be made mid-way between the colored ones, thus averaging out errors caused by wind.

Doing all this during a dead calm would be ideal, but how often does that happen!

One of the ideas below is quite impractical and obviously nuts; see if you can identify it ;-)

A floating flap would be one of the simplest ideas for a wind-speed meter. A hollow box is constructed, open at two ends so the wind can blow right through. In the middle, inside the box, hangs a flap connected to an axle. On the outside of the box, the axle is connected to a pointer which rotates around a scale drawn on the outside of the box. Simple! The stronger the wind, the higher the flap sits before the weight-driven torque balances out the wind's force on the flap.

To make the device more sensitive, a counterweight could be employed too, acting to partially balance out the weight of the flap. Less air pressure would then be required to get a reading. This would be more important if you fly light-wind kites.

Again, regarding sensitivity, some kind of funnel could be added to the intake of the device. This way, it's always working with higher air-flow past the flap, making it respond more readily to changes in wind speed.

Yet another way to achieve sensitivity would be to use a very light material for the flap. Say polystyrene or a light grade of balsa wood. You could even get fancy and construct a frame from split bamboo and then stretch thin plastic over it! Try anything to "add lightness."

In theory, a venturi could be constructed from a couple of funnels connected together by a very short pipe between the narrow ends of the funnels. A length of plastic tubing could then be joined to a hole in the short pipe. It would have to be airtight of course! The tubing would then be attached to a board which would need to be vertical like a wall. With a long U shape held into the tubing, it could be partially filled with a colored liquid.

With no air flowing through the venturi, the fluid level would sit at the same height on both sides of the U. However, as air starts to flow through the venturi, the air pressure in the short pipe would drop markedly. This in turn would suck the colored fluid through the tube causing the two fluid levels to differ. Hence, you've got something to calibrate! In fact, despite this apparatus being very impractical to carry around and transport, it would actually deliver a very accurate wind-speed reading! I'm sure of it, since the principle is still used in aircraft.

A little hand-held windsock could also be constructed with a long spar down the middle to hold it out straight. The spar could be pointed at one end so it indicates angle on a scale, much like the floating-flap idea. The windsock and scale would need to rotate on a bearing to remain in line with the wind direction. Otherwise, it would under-read.

Now for a real flight of fancy! The MBK Pie Chart Wind Speed Meter (MBKPCWSM) ;-) In theory, once again, this should work to a degree. OK, the idea is that you draw a series of colored pie-sections on a solid flat wheel. Have you ever seen a pie-chart illustrating financial or other data? Something like that is the idea, except there would be many narrow slices of pie. Also, the wheel would be hitched up to, or part of, a windmill in order to spin the colors around.

Now for the tricky bit. Trial and error would be required and lots of it! At 5 kph, the blue pieces of pie would merge into a solid image since they are rather close together! At 10 kph, the red pieces would merge, changing the color of the disk once again. Some purple kind of color would emerge, probably. At 15 kph, the green pie sections would merge, resulting in a combined color that would make anyone looking at it puke! Get the idea? Getting the angular width and spacing right for all those colored pie sections would be a nightmare, but it should work :-)

Lastly, of course, the whole wind-speed meter would need to be mounted on a swivel like a real windmill, so it always faces into the breeze.

The uhhm MBKPCWSM (pronounced "mah-book-pok-wizzum") could actually be made in quite small sizes if the engineering and manufacturing technology was clever enough. Remember, you saw this wind-speed-meter idea here first!