Is It Different From Stunt Flying?

Trick kites have been around for a long time now, although they have changed and improved over the years. So what actually is a "trick"? Tricks tend to be done in one spot, in the air or close to the ground, as part of a landing or takeoff maneuver. Sometimes they are referred to as "slack-line tricks." Now there's a real clue! 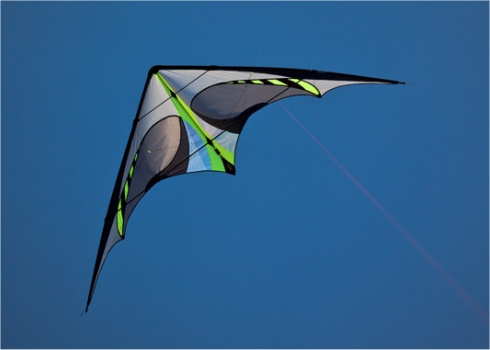 By throwing both hands forward, the kite can be "stalled" so it hovers and floats down on its face. Or it can even be flipped over onto its back, where it can hover while there is no tension in the lines.

A tug on one line will then send it spinning around on the spot.

Beginners find these kites uhhm trickier to fly, compared to just about any other type of kite. On your first attempts to fly one, be prepared for a few unplanned landings! Some might be harder than others.

Hence, it would pay not to learn trick flying on the most expensive model available.

Most tricks can be performed on any good delta stunt kite, but of course a special trickable kite is best. A skilled flyer can do a lot of fancy tricks based on a basic set of moves. These flyers are sometimes referred to as pilots!

Trick flyers also combine landings and takeoffs with fancy moves and refer to this as "groundwork." Neatly landing a kite on one wingtip after a low-level trick is an example of this.

The photo is of a Prism E3 kite, courtesy of the Dutch Flying Objects online shop.

There are dozens of good trickable kites available in the shops and online stores. Many of the old ones still perform well and find their way onto eBay at much reduced prices. The technology keeps advancing, making it harder and harder for anyone to just whip something up at home from a set of kite plans and expect similar results to a shop-bought one. An example of a very good trick kite is the Prism E3, which features in the photo at the top of this page. 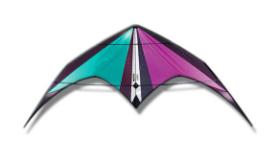 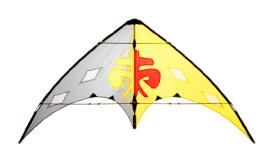 The Tattoo Zero Plus

Talking about older kites, I'll mention a couple that illustrate how different designs can suit a wide range of wind conditions. Do you live in a very windy location? A kite such as the Prism Alien was built for high-wind conditions.

There's an Alien in the first photo. Mind you, it's not a beginners' kite. A new one used to cost more than US$200!

Right down at the other and of the wind-speed range, the Tattoo Zero Plus needed so little air that it could be flown indoors! The Zero Plus was designed as a very capable light-wind trick kite for beginners and up. Apparently, it's good in those gusty-but-light conditions that can be so frustrating with a lot of other kites! I mean any other kites.

So how is a trick kite different from the stunters that you see doing precision figures in the sky, during a team display for example? That is, apart from the sheer ability to do all the "radical" maneuvers from the officially recognized list of tricks plus maybe a few more. Well, the first trick kites were considerably less precise than the stunt kites that inspired their design. In other words, you could try to fly a straight line with one, but it would be harder to do that successfully, compared to a precision stunt kite!

There can also be differences in the way bridles are designed and various other adjustments. You won't find a "trick line" on any other kind of kite. Some trick kites are actually quite complex to set up, out of the box.

Just like all aircraft, there is a general principle that more stability means less maneuverability. And more maneuverability usually comes with less stability and finer control. And so it is with stunt kites and trick kites.

I had a think about how trick flying might have started. It's not hard to imagine really. A stunt kite suddenly stalls in gusty conditions. The flyer just happens to scratch his ear at the same moment, causing the hovering kite to spin through more than 360 degrees. "'Hey, how cool was that!" he thinks, and trick flying was born. Well, I guess we'll never track down the very first trick.

Somehow, somewhere, people discovered that delta stunt kites were capable of all kinds of radical maneuvers, when deliberately flown in and out of the stalled condition in various ways. There are so many possibilities, new tricks are being perfected all the time. A few of them become well known and popular enough to make it onto the "official" list.

And this brings me to the "official" side to trick-kite flying. By 1999, the trick-flying community was really recognized by a certain kite manufacturer, R-Sky, in France. They came up with a competition format that was named Tricks Party, The competition flourished in Europe, and by 2005 a global competition was held. By this time, trick flying had been pushed to new levels. Old tricks were dropped, new ones were added, and rules were refined.

All this did not go unnoticed in the USA. Sure enough, Tricks Party USA was later formed to cater for the growing interest among American kite flyers. These two organizations keep in touch and try to stay compatible, so US flyers can participate in world events.

Trick Kites in the Future

Some trends can be seen and are sure to continue for many years: 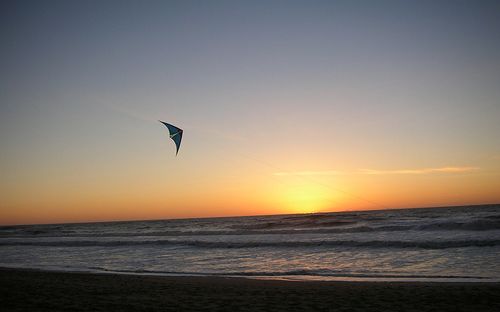