Read up and see if you can relate, or perhaps get inspired to try something new, next time you're out :-)

Barely a Breeze for the Barn Door

The weather site was indicating winds over 10 kph so the 2-Skewer Barn Door kite seemed a perfect choice. Even in a much lighter breeze, the lightweight skewer-and-plastic construction would ensure that the bright-orange kite would fly. Well, it did fly, but only just! 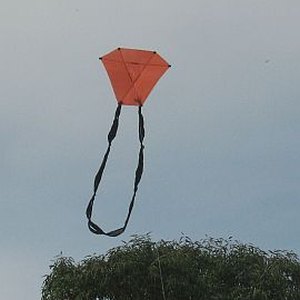 Dangling the kite from an outstretched arm just wasn't going to work, so the winder was tossed on the ground. As I walked toward the middle of the reserve with the small barn-door, loop after loop of flying line came off the winder as it tumbled around in the grass. It's untidy but it works. With about 30 meters (100 feet) of line out, I walked briskly back to the winder, running the line through my hand. With a little bit of grip applied, the kite rose up willingly enough. But it lost height immediately, wafting face down toward the ground.

For the next 20 minutes or so, it was one of those ultra-light-wind skill-building sessions. It was tow up, pull in, let out, pull in again, and let out during another tantalizing gust and so on. The idea was to keep the kite in the air as long as possible.

Finally, after several pull launches off the grass on a long line, the kite found some faster air above 200 feet. That's more like it! Now it was possible to just stand back and enjoy the sight and feel of the kite in adequate air pressure. Soon, the orange barn-door kite was cruising about at steep line-angles, staying around 300 feet above the reserve. A lot of motorists on South Road would have noticed it too.

It was a nice flight, after a somewhat slow start!

Floating Over the Neighborhood

Hey, this sunset flying in the backyard idea is really working out.

Today it was the MBK Dowel Delta, which is reliable in very light winds. After numerous attempts to get it above rooftop height, it finally got helped along by a gentle gust that was perhaps 2 kph stronger than the others. It's not easy when you've got about six paces to run in, and the breeze is so light it can hardly move a leaf.

Anyway, there it was, not shifting left or right by more than a few meters at a time. On letting out even more line, I discovered a sharp little wind-gradient at about two or three times the height of our rooftop. Perhaps it amounted to another 2 or 3 kph of wind speed, all of a sudden. The kite dipped below and climbed above this level several times, so the effect became pretty clear. Sometimes, below this level, a few firm pull-ins were required to contact the faster air again, where the sizeable pale-orange delta would just maintain height by itself.

A slightly windier period came through for a few minutes, so I pulled the kite down much closer to the roof, just in case. I didn't want the kite to loop over and end up over the neighbor's fence.

After this, the breeze progressively died off as the sun sank to the horizon. But this was not before the Dowel Delta had gone right out to 30 meters (100 feet) or so of line. Gentle gusts sent it surging almost overhead, directly over our roof.

Eventually, all breeze ceased, and the Dowel Delta came down helicopter fashion—yes, vertically—as I maintained a little tension in the line. It was a fantastic flight, although not so relaxing, since I had to be absolutely sure to keep it out of trouble!

A-Frame Soars in the Sun

A rare sunny day with moderate winds provided another opportunity to get out with the 3-Skewer A-Frame again. I was hoping for some fresh breeze to really push the kite hard and give an opportunity to trim it properly.

First, I let the kite out at about 30 degrees of line angle. Just for fun, I let the line out just fast enough to hold the kite at around 30 degrees all the way out to 60 meters (200 feet) of line. Then, I stopped and the A-frame rose to around 45 degrees. The stronger gusts kept bending the kite and pushing it down to lower line-angles, so I brought it back down by anchoring the line and walking out with the line slipping through one hand. The towing point was easily shifted forward by a centimeter or so (1/2 in.) by sliding the Prusik knot and then locking it again in the new position.

This time, the kite was much more comfortable and rose right up to 60 or 70 degrees. This continued even after letting out another 60 meters of line! For 15 minutes or so I just enjoyed seeing the 3-Skewer A-Frame flying steadily at high altitude, the loop tail rippling just slightly in the breeze. The orange plastic was brightly illuminated by the late-afternoon sun from behind. There was no sign of leaning, strangely, despite the good moderate airflow at that height. Perhaps unwinding the tail to its original state had made quite a difference, so I can't complain!

On the ground, the wind meter recorded an average strength of 5 kph and a maximum gust of 14 kph. Toward the end of the flight, the fresher gusts had died down quite a bit. As a result, the kite hung lower from time to time during lulls.

Steady and High in Cold Air

It was another short but very enjoyable flying session while the small son had his soccer practice a few blocks away. This time it was the sode's turn to be brought out of mothballs for a fly. After setting up the wind meter on its tripod and rigging the kite, launching was easy in the gusty breeze coming through between the scattered trees upwind. Out to about 30 meters of line, I just let it slip fast enough to maintain a 40-degree line angle.

Flying about on 60 meters (200 feet) of line, the big sode surged around and quivered occasionally in the rough air. There were no dramas, although the line was tight in the almost moderate-strength wind up there. Then I had a bit of fun, shaking line off the winder with my left hand while controlling the slippage with my right hand. This was done fast enough to allow the kite to sink down to a mere 15 or 20-degree angle, far away on 90 meters (300 feet) of line. Once there, I just hung on while the kite did a magnificent fast climb, weaving gently on its way straight up to 60 degrees.

Not content with a mere 90 meters, I continued to let line out slowly until the Dowel Sode finally sat, almost motionless, up around an altitude of 350 feet above ground. The breeze was smooth and moderate in strength at that height. The line was pulled tight and sagged by only 5 to 10 degrees. I can't actually remember ever flying this sode in such smooth air before. There it was today, "nailed to the sky," until I decided to take it down about 10 minutes later.

Passing down through 250 feet, the line tension quite suddenly slackened off—but just a little. Then again, below 50 feet, the line tension decreased further, and the sode started shifting around and quivering in turbulence from the trees and houses upwind. With the kite on the ground, a quick check of the wind meter showed an average wind-speed of just 3.7 kph near ground level and a maximum gust of 12.4 kph. It felt like a steady 15 to 18 kph up high though!

Yes, as the sun was almost down, the big Carbon Diamond (as I like to call it) hung at a steep angle while one and then another passenger jet climbed away from Adelaide Airport heading east.

Below 100 feet there wasn't enough air movement to keep the 2-meter (6-foot) span hard-Tyvek-and-carbon-tube diamond up there. However, the occasional puff was just enough to allow some working of the line.

It was a little like dynamic soaring. Pulling in line resulted in smooth climbs to around 100 feet, whereupon I allowed the few extra kph of breeze up there to drift the kite downwind, losing height. By repeating this quite a few times I managed to get around 60 meters (200 feet) of line out without landing the kite.

Above 100 feet, the big diamond was able to maintain height and even climb slowly to high line-angles during weak gusts. Overall, it was fairly smooth air averaging about 12 kph at height.

It was ideal for the diamond, which hung almost motionless for much of the time. Despite the weight of the hard house-wrap-Tyvek sail, the 100-pound line was pulled tight at more than 60 degrees from the horizontal.

Slots in the sail just below the horizontal spar boost the efficiency of this kite by promoting smoother airflow over the top. This works much like the landing slats in a passenger jet, along the leading edge of the wings.

It was an idyllic outing really.