Here's a short selection of flight reports which feature some times when my young boy accompanied me to help out. He often did some of the flying too.

A large mass of low gray cloud had just passed over, accompanied by a freshening of the gusty light breeze through our backyard. 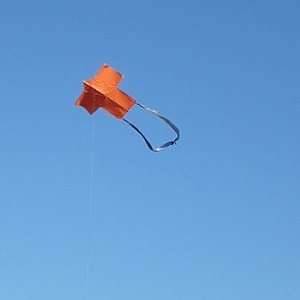 Aren and I had taken out the 58 cm (23 in.) 2-Skewer Sode for a spot of white-knuckle rooftop flying. Flying over the rooftop that is, not from it! As it turned out, the kite did end up dragged into the gutter a couple of times, but it escaped injury.

We both had turns flying while the other took some video on the camera. The last clip showed the kite being flown several meters over the roof, before a lull forces a pull-in of line. The result was a nice closeup of the bright-orange sode as it floated down past the gutter and then hovered over our side lawn in a fortuitous puff of air.

One of the dangers was getting the loop tail caught on the TV aerial, but the sode managed to evade that one. Another danger was swirling air looping the kite onto the roof tiles. That did happen once! On another occasion, Aren allowed the kite to sink out onto the flat veranda. But each time, it was possible to gently prise the kite out of the gutter after it got pulled there by the flying line.

The 2-Skewer Sode kite is now safely back on the wall in the living room.

Aren (9 years) spent most of the time on the handles this afternoon, in moderate-to-fresh winds. Rather gusty and inconsistent winds they were too. The Peter Powell Sky Master MkIII did everything from barely hanging in the air to accelerating strongly away in any desired direction. Aren has seen me land the kite off to one side, and today he very competently performed his own landing on the damp grass.

Setup just gets faster all the time with this stunt kite. Familiarity speeds things up and a little trick comes in handy too... Reversing the handles allows the lines to pull straight off them when backing away from the rigged kite. You could jog backward and it would still work!

I flew first for a couple of minutes. It was immediately clear that we had forgotten something—the loooong tubular tail! After landing the kite we rectified that situation before Aren took the handles for a while. He had fun doing daring vertical eights and generally flying around at all heights.

Aren had to struggle at times to keep the kite under control during lulls in the breeze. In fact, he needed a relaunch once or twice. At other times he enjoyed ample line tension but somewhat short of the heaviest he has ever experienced. There was a time down at the beach when this kite nearly made him lose his footing! It's on video, in an old, old FB post.

Looking out the window at home, it seemed like the breeze was gusting into the mid-20s (kph). A spur-of-the-moment decision saw us down at a large school oval with the huge Multi-Dowel Delta kite, which is about 4.8 m (16 ft.) from tip to tip. Actually, we had it rigged for higher winds today, which reduces the wing span a little.

Giving Aren (8) the camera, I soon had the big kite wallowing around close to the ground. With every little puff of extra air, I let out line so the kite moved out across the grass.

Eventually, on 30 meters (100 feet) of line, the kite was allowed to sit back and rather slowly climb out to full height. There wasn't really as much breeze as expected! So the leading edge spars could have been spread out further for a tighter sail. But never mind. Once up, the kite was holding height easily.

Next, more line was let out, to 60 meters (200 feet) now. Again, the huge blue delta took its time regaining height and line angle. But it was flying smooth up there, well clear of the rough air from houses and trees upwind.

Finally, having just a few more minutes available before being due back home, we climbed the kite up on 90 meters (300 feet). Nice! I took some video at this point, since Aren was able to hang onto the flying line. Despite the size, this kite never pulls more than a few kilos.

Meanwhile, the wind meter had been whirring away on its little tripod. The device showed a 5 kph average with a maximum gust to 10.6 kph. That's fairly light, although the delta had probably felt the occasional gust in the mid-to-high teens, high up.

It was a short outing but it was good seeing the large light-wind delta doing its thing at almost 300 feet above the grass.

This was somewhat spur of the moment, but it turned out extremely well. The weather reports for the following week were dismal. It was definitely time to grab a kite and head outside while flying was still possible!

With the sun just below the horizon, the sky above was darkening by the minute. The most subtle puffs of breeze were tickling the fronds of neighbors' trees.

Several attempts were made to get the diamond kite into the air. This involved sitting it up against the side lawn fence, backing off, then pulling in line quickly to get the kite just above roof height. No luck. There wasn't a chance of even maintaining height, it seemed.

Next, a similar approach was tried on the rear lawn, which offered more room to tow up. This was more promising. Also it was a little more exciting since it involved navigating the kite over the roof on one side and a large peach tree on the other!

By now, Aren was helping by sitting the kite up against the fence for each tow up, and also by timing the flights on his stopwatch—fun stuff for an 8-year-old!

Finally, some line tension materialized as the kite soared to about twice roof height. From there, it was easy to slip out a few more meters of the 20-pound Dacron and let the pale-orange diamond gently climb back up to around 50 degrees of angle each time.

As the minutes ticked by, the darkness deepened, but it was still easy to see the kite overhead. It responded to every little wind shift and gentle gust. At times, the diamond was boosted to over 60 degrees of angle, on about 20 meters (70 feet) of line.

An airliner approached, way above, landing lights ablaze and red/green tip lights glowing brightly. It passed overhead, several thousand feet up. Around the same time, a bright star peeked through the cloud cover, reminding us that we were flying well after sundown.

What a magic flight! After Aren called out "10 minutes!", we brought the kite down. Flying from small backyards definitely has its charms.

There was a window of only half an hour or so to get out and fly something in the late afternoon. Aren (6) actually volunteered to fly too. Although he features on a number of pages on this site, he hasn't been a keen kiter in recent times. His mum's smart phone has its attractions you see! Anyway...

Out at the school reserve, the southerly was fairly unobstructed. There were no tall trees on the upwind side of the field. This was good for the Dowel Sled, which is very picky about the air it flies in. Aren had the 2-Skewer Rokkaku on a 20-pound line, while I flew the sled on the 50-pound line.

Aren was soon complaining about the line pull on the rok. Although smooth, the breeze was gusting up close to moderate strength at times, up around 100 feet off the grass. This was pushing the rok fairly hard. Mind you, Aren has ample strength now to handle a kite of this size.

Meanwhile, the sled was having mixed success. Just like the redesigned 2-Skewer Sled some days ago, the wind strength was just a little too much for it while it was at its highest line-angles. The bamboo skewer taped down the centerline was doing a great job preventing the leading edge from collapsing, the rest of the time.

Near the ground, the wind meter recorded an average of 4.3 kph and a max gust of 12.2 kph. Perhaps there wasn't  much turbulence, but it sure was gusty!