Here's a short selection of flight reports which illustrate a few things that might interest you as a beginner.

Read up and see if you can spot a handy hint or three :-)

The Effect of Rising Air

Earlier in the day, things looked fairly calm, but by the time I got out there were windier periods. Down at the reserve, moderate gusts would come through from time to time. They were just enough to launch the Dowel Box kite (fresh wind version) it appeared. Sure enough, after a few tows and sink outs, the blue "squashed box" design managed to claw its way higher. A bit of timing and working the line helped, of course. 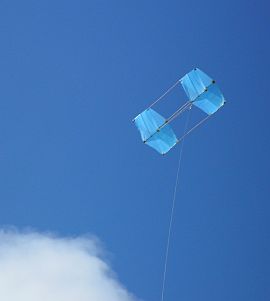 Passing through 100 feet or so, additional wind strength made for very ideal conditions for this kite. Climbing further was uhhm ... a breeze. Initially, the sky was rather overcast, and the box kite settled down to a rock-solid position in smooth moderate winds. Just over 90 meters (300 feet) of line was out.

A ragged formation of white cockatoos flew across, just downwind of the field. They appeared as flickering specks of pure white. Later, a splash of red and yellow shot past me at shoulder height; it was a parakeet of some kind, in a hurry to get somewhere downwind of my position.

Why fly on 90 meters when there is more line on the winder. Out it went, another 30 meters, to 120 meters (400 feet). Not long after this, I noticed that the kite was scooting around a lot more and even climbing overhead from time to time. Well, it was 80 degrees at least. Thermals had arrived! Indeed, the sun was now out but not quite at full strength, due to thin sheets of cloud here and there. The air had responded to the ground's warmth within minutes. Now it felt like I had a big fish on the line, not a barge.

All up, it was a great flight, with the wind meter peaking at 9.6 kph at ground level. But upstairs, it was somewhere between 15 and 20 kph, I think.

I popped down to Seacliff Beach today with Aren, to help some Cub Scouts with the kites they made in a workshop with me the previous week. Unfortunately, the amount of successful flying was almost nil due to very fresh winds. The poor kids were flying spinners, not kites! I put my own Tiny Tots Diamond up for a few minutes. It gamely stayed up on about 6 meters (20 feet) before the wind speed crept up by another few kph and forced the little kite down onto the sand.

All the while, some delta stunt kites were doing OK and also a couple of single-line retail kites. Fiberglass spars might be four times as heavy as dowel, but they certainly shine in heavy wind! Being synthetic, they also bend very evenly on both sides of the kite, keeping it balanced despite the air pressure.

With the punishing wind coming off the ocean, even my Dowel Box (fresh wind) was showing a bit of imbalance, leaning over to the right. It's getting a bit old and flappy! Even heavy-duty drop-sheet plastic starts to stretch eventually. It would probably take around a meter or two of tail on the left side to correct it, but I just packed it away instead.

Near the ground, the Windtronic meter registered an average of 23 kph with a gust to 35 kph. That's breezy!

Smooth Air at the Beach

Down at Christies Beach, we found a patch of dry sand which provided ample space over which to fly the Dowel Rokkaku. As I held the wind meter at shoulder height, it registered about 9.5 kph gusting to just over 11 kph. The breeze was fairly smooth, as was expected since it was coming from across the ocean.

As with the roller yesterday, a few small pieces of tape were required to secure some of the spar tips to the sail. This kite hadn't been flown for quite a while either!

With the breeze so very smooth, it was possible to take some video on only 5 meters (17 feet) of line. This kite has never been recorded in such clarity before.

In the process of letting line out and climbing the kite again, it became clear that it was slightly out of trim.

At low line-angles, with more strain on the sail, the rok leaned over and drifted far to the left. As the line angle became steeper, and line tension eased, the kite smoothly righted itself and continued to climb straight up. This pattern happened several times as I let the line out in stages. Never mind, a small tweak of the upper sliding knot of the bridle should be all it needs.

One of the leaning episodes took the kite far too close to the esplanade and its traffic. So I had no choice but to pull in very quickly to clear the road. This forced the kite down onto the embankment. Fortunately, it was possible, during a slight lull, to pull the kite off and into the air again. No damage was done.

After packing up, another wind check revealed it had moderated down to 7 kph, gusting to 9 kph. Ultra-smooth beach flying makes a change from the somewhat less predictable experience of flying inland!

How to Stop a Kite Turning

Despite a weather site showing 1 kph gusting to 2 kph (!), the neighbor's palm fronds were indicating differently. There wasn't much out there, but certainly it would be plenty for the ultra-light-wind Dowel Delta!

Aren and I walked down to the local small park and it wasn't long before the kite was rigged and airborne. A gentle gust provided ample lift to get the pale-orange craft up past treetop height. Once there, staying up was fairly straightforward.

For some time now, this kite has required a short plastic tail-let off one wingtip to keep it straight. On 60 meters (200 feet) of line however, it soon became apparent that a little more correction was required. At one point, the kite was pressured into doing a very large, slow, and graceful loop to the left. Fortunately, I happened to be one step ahead so a safe clearance from the nearest tall tree was assured! After passing within a couple of meters of the grass, the kite soared high once more.

After bringing the delta down and attaching a short length of electrical tape to the end of the tip tail, another launch was effected. This time the big pale delta performed admirably, holding station much more easily. Despite the changes in wind speed, the air seemed very smooth. Minutes would go by with the kite parked almost stationary at a high line-angle. Wonderful stuff!

As happens with deltas, small disturbances occasionally pointed the nose off one way or another. This resulted in a drift to a new position for a while.

Finally, with some video taken, much more line was let off the winder. On around 120 meters (400 feet) of line, the kite was way up there, and well over "tiger country"—places you don't want to land. But the air was so smooth and the delta so well trimmed by now that the risk was minimal. It took quite a few minutes to get the kite down before Aren and I walked home.