The seagull made a long pass along the rocky embankment, keeping low.

Meanwhile, the MBK Soft Sled was cranking gently left-right left-right somewhat above the lift region over the rocks. Over 30 meters (100 feet) of 20-pound Dacron was out, with the small wood-block winder wedged behind the carry bag on the damp sand. 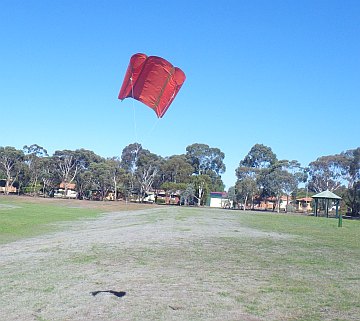 Shortly after arriving, the wind meter registered 12 kph with a gust to 16 kph—smack bang in the gentle range of wind speeds. This is just perfect for most homemade kites, including the Soft Sled.

This area seems to attract dogs and their owners by the dozen. Most passed harmlessly by, but a couple of curious canines sniffed the bag and even the flying line! However, the kite was holding a good 50-degree angle, so there was little chance of a dog's leg getting caught up and causing problems.

The bright-orange Soft Sled did its thing up there for over an hour, while I took the occasional short walk up and down the beach. A catamaran motored slowly by in one direction. A light aircraft buzzed back the other way. At least ten big jets departed from Adelaide Airport at roughly the legal distance from the spot where I was flying ;-) You can't fly kites right on the doorstep of airports you know :-|

There were plenty of curious glances from the foot traffic along the esplanade. And also, there were people on the thin strip of beach sand, where the tide was about midway in.

Soft kites are so handy for situations when you can't have anything bulky to carry. In this case, it was waiting for a car service to be completed.

... into the bumpy gusty early afternoon air, of summer.

With promising bursts of wind speed apparent in the surrounding treetops, the MBK Parachute had been pulled out first. The front row of bridle lines had been shortened slightly, as an experiment. However, the breeze was just not consistent enough to allow even a brief flight. So, after quite a number of launch attempts, out came the trusty MBK Soft Sled.

The sled likes light to gentle wind-speeds, so it floated up without delay. Soon, it was powering around the sky on a needlessly strong 50-pound line. You know how it is; I could have fished around for the 20-pound line but didn't, knowing the kite would cope.

After a few minutes it became clear that the strongest gusts were forcing the kite into the odd loop to the left. This would have been OK except for a close call with a rather tall and dense tree! I promptly took some line in and also shifted the anchor point by quite a few meters. It was a case of taking care of all possible outcomes, if you know what I mean.

This outing was more of a family occasion, so the Soft Sled was left to its own devices for the next hour or so. Only a couple of relaunches were required when extra-long periods of dead air shot the kite down.

We were out in the warmest and most active part of the day. There were some monster thermals around. I would occasionally see the sled rapidly juddering fore and aft in thermal turbulence. Never-the-less, it was a good outing!

It was just a short walk to the nearest park, with several Soft Series kites in the bag. A gusty moderate northerly was  blowing.

First up was the MBK Parachute of course, with shorter bridle lines swept forward by some 20 degrees. That wasn't such a great idea it turned out, to have the towing point ahead of the leading edge. At least with this design, the result was a tendency to roll one way or the other, which would soon collapse a wingtip. So it was back to the drawing board once more.

Next up was the first kite in the Soft Series, the Soft Sled. After a short flight and small bridle-adjustment, up it went again. The wind speeds were ideal, gusting into the mid-20s in kph. Strong thermal activity pushed the smallish sled up high, the air pressure popping every crease out of the plastic.

The kite does get a bit creased up when stuffed into a small zip-lock bag—but never fails to self-rectify in the air! Sometimes it takes a few minutes, after which the de-crease can result in a small trim change.

A lull brought the Soft Sled right down again, but I managed to pull line in until the kite found another gust which took it back up. It was a pleasant fly, on around 45 meters (150 feet) of Dacron line.

After putting the MBK Soft Sled up to around 30 meters (100 feet) I noticed a persistent lean to the left. Usually this is not much of a problem with this kite, but today the breeze was gusting into the mid-20s in kph. Tall trees beckoned, not far away, so it was time to trim the kite a little better.

Being a simple design offered free on this website, the bridle was just knotted in the middle, ready to take the flying line. This spares newcomers the complications of tying sliding knots such as the Prusik!

With no sliding knot to adjust, I took the somewhat cruder approach of tying a small Loop knot into one bridle line. This soon proved to be an overcorrection, with the kite darting off to the right. After retying the knot into the tiniest Loop knot I have ever done, the kite went up for another try. Bingo ... as they say!

What followed was the most amazing flight I have got out of this small 60 cm tall kite. Every gust just powered the sled higher and higher, as it spent a great deal of its time pointing straight up. Despite flying the kite on 100-pound line today, it still managed to pull the line tight and climb to very respectable line angles with 90 meters of Dacron let out. During lulls, a fair amount of sag would develop in the flying line, only to disappear again when the next gust came through.

It's nice when you get a kite flying so well that it can be confidently let out past the distance to the nearest trees downwind. At a great height of course, just in case!

Slipped Out With the Soft Sled

It's been a while since flying anything at all, so out I walked to a nearby vacant block. The local council has a complete disregard for the needs of kite flyers, planting trees across various plots of land—including this one. Tsk tsk where will it end.

Today was sunny and breezy but the next couple of days will have rain. So it was fly now or not for a while.

First up was the 60 cm (48 in.) tall MBK Soft Sled. After an initial attempt to get the kite away, I walked out to the middle of the small block and tried again. There were few problems this time, as the small orange sled caught a decent gust, and line was steadily let out.

Soon the kite was flying on somewhat more than 60 meters (200 feet) of line, pulling left in the strongest air. Rather than fiddle with the bridle, I will experiment with slightly closing the smaller opening of the right-hand inflatable spar. This should produce more drag on that side of the kite. This would be a neater solution than a lopsided bridle adjustment. It might take a few tries to get the opening size right though.

The sled was flying reliably, if somewhat off to one side at times. I also put up its small cousin, an identical but only 25 cm tall version! The tiny Soft Sled—also tailless—flew around for a while on a 20-pound Dacron line.

My thought was to get some video of both kites, with the 20-pound line's length adjusted so both kites appeared the same size in the air. In the limited time I had available, it proved too tricky in the gusty conditions, with the smaller kite often ending up on the grass. Maybe I'll try it some other time, at a larger and more open field.

But only just. This afternoon was a real low-wind test for the kite. It was so marginal in fact, that numerous times the 60 cm (24 in.) Soft Sled sank out to the grass on a straight line.

A quick meter-reading confirmed that even the gusts were barely reaching 10 kph at head height.

Anyway, today's flights were proof that the sail plastic was thick enough, and that the packing tape was also doing a good job as soft battens of sorts. It will be interesting to see just how much wind speed this kite will cope with, at the high end of its wind range—perhaps tomorrow!

After taking a photo or two and some video at low altitude, I managed to slowly coax the bright-orange kite out to 90 m (300 ft.) of line. However, the line angles remained low (between 20 and 30 degrees) since the kite was barely supporting its own weight. Cyclic left/right bobbing was another clue that the kite had only just enough air pressure to stay up, even at 150 feet above the grass.

Meanwhile, up around 3000 feet, smooth white clouds were moving briskly in the opposite direction to the ground-level breeze.

It wasn't the most relaxing fly ever, but at least the kite flew!