On arrival at one of my favorite flying fields the grass was very wet, but otherwise all looked good. Gusts were coming through, blowing into the 20s in kph. That was ideal for the MBK Parasail!

Just like the first prototype, the current kite tended to rotate to the left under pressure. Hence, as before, I closed off part of the upper side vent on the right. After a short flight, this was clearly not enough, so I ended up partially closing both the other right-hand side vents as well. This worked for a while, but the kite seemed to get up to its old tricks a bit later. 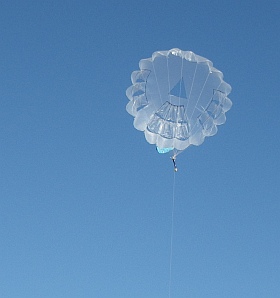 I suspect that strong air pressure might have been stretching the very thin plastic around the openings of the vents. Or perhaps it was just extra-strong gusts of wind, since the kite was generally flying around OK.

With a total bridle weight of around a third of the first prototype, this kite was occasionally reaching much higher line angles—up to 60 degrees, compared to the older kite's 45 degrees. While some lighter line was on order, the older kite had been flying on a combination of 100 pound and 200-pound Dacron.

With all the adjustments, the kite was now spending minutes at a time in the air, just occasionally being forced down to the left under the pressure of fresher wind. Often, the sail would touch the grass and deform slightly, still full of air, before rolling sideways and floating skyward once again.

Sudden lulls would cause the sail to act more like a parachute than a kite. That's one of the unique aspects of this design.

A small Murray magpie hovered within a few meters of the flying kite for a few seconds, observing it, before fluttering away. Later, a flock of white cockatoos did at least two flybys near the kite, which was sitting at around 50 feet at the time. Some of the birds had to take evasive action as they almost clipped the flying line! A kookaburra started up in the distance.

Eventually, the line was out to around 30 or 40 meters (100 feet+). With the overall wind-strength building, the "flying jellyfish" proved a handful to bring down. The strongest gusts were measured at 5.5 kg with spring scales. On a 50-pound Dacron line, that strain can be almost painful without gloves!

All in all, it was an encouraging outing with the parasail kite. Weather stations were reporting gusts to 30 kph not long after I left the field. After a little more experimentation with trimming it to fly straighter, the kite should soon have some long high flights. By "high" I mean at least 300 feet off the ground.

With some initial mods completed on the first prototype, the last few days have been spent documenting the build of a second parasail kite. This one is scaled up a little and also has the vents opened up a bit more, on top of the upscaling.

The first kite had four extra-thick bridle lines at the bottom edge. My thought was that the extra weight and drag would be beneficial for stability. And the first kite certainly was stable. However, were the heavy lines actually making much difference, or were aerodynamics playing a bigger role with this type of kite?

While out for a walk today, I had a winder stuffed into one pocket and the rolled-up kite (the latest one) in another pocket. Ah, the convenience of soft kites!

Stopping for a while at a small local park, the MBK Parasail was soon in the air. To cut the story down a bit, let's just say the kite was barely stable. A tendency to loop left will be easily fixed, but in general the kite showed only the tiniest tendency to seek an upright stance in the air. It kept ending up on the damp grass. So, it's back to the drawing board.

On arriving home, a small panel of somewhat heavier plastic was added between the two lowest bridle lines. As a small drag-plate, it should cause the bottom edge of the sail to swing away downwind when the kite is up a bit. At lower line angles, the extra weight should help the kite to pendulum into the right orientation to climb away. If even more weight is necessary, it's easily added to the new panel. Strips of electrical tape could be used, if it comes to that.

...like a bull! Although the nearest online weather station was reporting 18 kph gusting to 24 kph, the gusts seemed somewhat higher—probably due to an approaching rain cloud.

Earlier today I had opened out the vents considerably, reduced the size of the central hole, and also lengthened the lines by a good 15% or so. Initially, the flight characteristics seemed relatively unchanged from the 90 cm diameter sail's first test outing a couple of days ago. This included the tendency to spin to the left when under pressure.

After partially closing off a side vent however, the parasail started to show its true colors. Stability was only barely adequate in the moderate wind-speeds, but the trimmed-out parachute managed to touch 45 degrees a few times, on a very tight line.

So, it's a real kite after all! If people want to add a few tails to the lower edge, that would improve the stability.

As the distant rain-squall got closer and the gusts started waving the treetops around, the modestly sized 'chute proved a handful to bring in. If you thought sleds or parafoils pulled hard for their size, try a parasail! Being basically a high-drag parachute, it was no wonder.

Eventually I got the 'chute back on the ground and started packing away. A 1.8 m (6 ft.) diameter 'chute could well pull harder than the 2.4 m (8 ft.) tall Multi-Dowel Sled!

One other thing I found impressive about the kite today was that nothing broke! This design spreads the forces fairly evenly through the sail and many bridle lines.

But certainly this design has promise. It actually flew today. Something that looks so much like a parachute would only fly down—not up, one would think. However, by carefully copying the vents used by the full-size parasail, this comparatively tiny 'chute managed to fly stable and even gain some height with all the lines adjusted to the same length.

I used 200-pound line on the four lowest attachment points, reasoning that the extra weight and drag down there could only be good for stability. Strength-wise, the whole thing could fly on 10-pound lines since there are so many of them (18 to be precise)!

Anyway, the clear drop-sheet plastic sail popped open like a real parachute and hovered around at low line-angles in the gusty light breeze. As you would expect, this kite pulls quite hard for its size! There was heaps of drag and not much lift, which brings me to a point—the next step will be to open out the vents even further to let more air through.

Also, the lines will be double-checked for equal length and fixed more securely at the towing point. Today, almost half the length of the bridle lines was folded up and secured with a small rubber band, forming a bundle which had a significant amount of weight. This was like a passenger on a full-size parasail, as they get towed behind a motorboat. This approach will also allow me to try different bridle lengths fairly easily.

Next time out, I'll make all the lines about 20 cm longer so there is less chance of the 'chute collapsing.

I'm so glad the thing flew, since making one of these is not quick! It's very cheap and quite easy, yes, but it involves a few hours of marking, cutting, taping, and knotting.