So You Want to Snow Kite

Which Kite to Use?

A wide range of kites can be used to snow kite. We all know there isn't much friction out there on the snow or ice, particularly if you're wearing skis or skates! So, in theory, just about any kite with a bit of pull will get you moving.

However, from a practical point of view, some kites are much more suited than others. In fact, some traction kites are made specifically for powering across snow and ice.

As a general rule, "depowerable" four-line parafoils are the ideal snow kite. Some people with a sailing or kite-surfing background use the term "sheetable" instead of "depowerable." 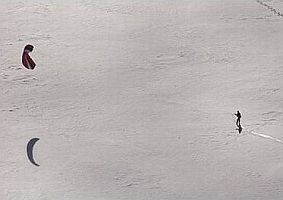 Powering over the powder

This kind of setup takes care of the four most important aspects of a snow kite:

It's pretty obvious that you need some sort of steering ability. Just like the mainsail of a sailing boat, you need to position the kite according to whether you are running downwind, crosswind, or trying to make progress upwind.

On top of that, if you're more adventurous, you might be into getting "big air" off the ground. This involves flying the kite high and piling on the power. The ground drops away and you're just hanging on, floating in air! Some snowkiters use C kites or leading edge inflatables, rather than foils. See the photo below: 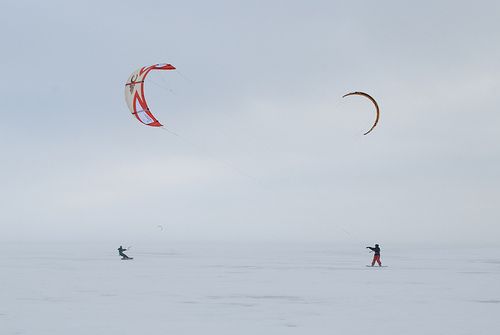 Like any hobby where you fly something into the air, it's going to hit the ground hard once in a while. With practice, the crashes happen less and less. It would be frustrating and expensive to always be replacing spars, so a soft, flexible design makes the best snow kite. Parafoil designs are ideal, although even these vary in how much punishment they can take.

What happens if you make a mistake and the kite ends up on the snow? That would be really inconvenient if the kite wasn't reverse launchable. That means you can get the kite into the air again from where you are, a huge bonus. The kite lifts off trailing-edge first, before you spin it around and start flying leading-edge first as usual.

Unlike kite surfing, conditions on the snow can change every day. You need more power for powder snow than for when it's more icy. A big snow kite is good for light winds, but a smaller one is needed when there is strong wind. For many years, skiers had to own quite a number of kites if they wanted to kite ski in all conditions.

But now there are kites designed to deliver variable power. The control bar is pushed away from your body to reduce the kite's pull and pulled in again whenever you need more power. These kites cover the wind-strength range of two or three traction-kite sizes. So if you choose wisely, according to your body weight and local weather conditions, you can snow kite with just the one kite most of the time.

I can't resist a few words here about a kite-surfing video I saw recently. This guy got caught in a massive updraft and came sailing over the beach, heading inland, dangling from the 100 foot lines of his surf kite. He managed to steer it back toward the sand but ended up hitting the deck quite hard. He must have broken two records at once—the "biggest air" ever (under a kite) and the smallest paraglider ever to do a beach landing!

Photo courtesy of
A Wind Of Change

Does anyone out there snow kite with anything else besides foils? Yes, there is one main exception. That is the inflatable style of kite that is mainly used in water. Tubular spars pumped tight with air hold the kite's shape. It looks a bit like the letter C from a distance, so they are also known as C kites.

That's an Ozone Instinct in the photo, sitting on the sand.

Some of these "tube kites" have been modified so you can snow kite with them. They are depowerable too. However, if you slam it into the ground one too many times and an inflatable spar springs a leak, you're in trouble! You'd have to get out the pump, if you remembered to pack it. 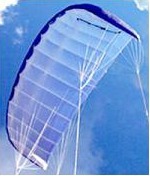 What's the difference between ordinary four-line foils and the depowerable variety?

The ordinary type have two steering lines which hold nearly all the tension most of the time. The other two lines are rigged to the rear edges of the kite, which act as brakes. See the PKD Buster up there.

For stunt flying, these brake lines can be used for more precise control of the direction the kite flies. But for snowkiting, they are a good safety measure. The brakes can be used to slow the kite down or even stop it flying altogether. 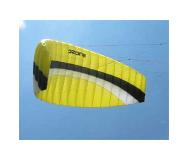 A depowerable kite is flown on all four lines at once, so its angle to the wind can be altered. This is just like the mainsail of a sailing boat.