All 150 Meters Out, on Second Outing

With light-and-variable winds forecast, it was the perfect opportunity for the new Simple Diamond kite to really strut its stuff. My wife felt the urge to shop at Coles during the same time-slot, so I dropped off May and Aren at the shops along the way. 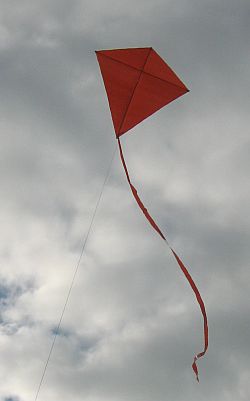 Dancing as flat Diamonds do

I had just over half an hour to get the video, inflight pictures plus get the kite up to 400 feet altitude and back down.

As I pulled up, I noticed a guy practicing his golf swing. However, there was plenty of room and the wind direction ensured there would be no conflict if the kite came down unexpectedly.

Down low, there was barely enough breeze to keep the kite in the air, between gusts.

Soon, thanks to a fresher gust, the Simple Diamond kite was reasonably settled just above treetop height. It only took a minute or two to get all the camera work done, with the winder pinned to the grass under my left foot.

With the forecasts for less rain today, I was hoping for a little sunshine to make the photos and video worthwhile.

The sky was very cloudy with about 90% coverage, but at least the sun was a long way from the horizon this time. Also, the cloud layer was not too thick so there was a reasonable light level after all. It was the next best thing to having no direct sunlight!

With the kite doing the characteristic dance of a diamond, it was not hard to slowly move upwind while letting out more line almost continuously. The Simple Diamond kite maintained about 20 to 30 degrees of line angle while the line was going out.

Finally the opposite edge of the grassed area prevented any more of this, but now all 150 meters of line were out.

It only took a few moments for the diamond to rise to its maximum height of around 250 feet above ground.

This was actually a little disappointing, since my other diamonds tend to do better than the 30 to 35 degrees the Simple Diamond was doing. However, the air up there was quite fresh, with the kite shaking strongly from side to side at times. Once or twice it even looped around before recovering. I think it was simply flying in much faster than the optimum wind speed.

In fact, after 10 minutes or so, the breeze seemed to moderate a bit and the kite flew smoother and floated up to maintain about 40 to 45 degrees. That's more like it! It seemed quite respectable for a homemade diamond made with somewhat heavy two-ply plastic.

Overall, the flight of the Simple Diamond kite was quite predictable from minute to minute. Mind you, the line was constantly pulsing as the flat kite sail flexed and twitched around on its simple single-point bridle.

The only reason for using such a bridle was to help make the construction job as quick and easy as possible for beginners!

Finally it was time to bring the kite down. Turn after turn went onto the winder, as I walked slowly downwind toward the kite.

By the time the Simple Diamond was in my hand, the turn count had reached 298! It takes a while to bring down a high-flying kite, particularly when it's keen to stay up there.