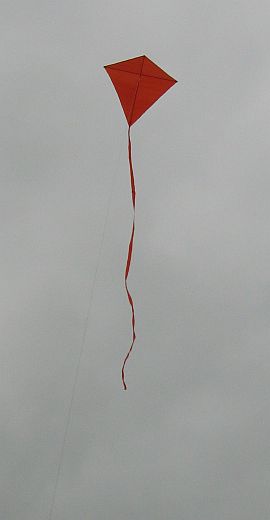 Hovering on a short line

It wasn't the greatest day for photography with a cheap digital camera though. Overcast skies kept the light levels well down. But at least the punishing cold southerly breeze had moderated a lot overnight.

We went down to a local grassed oval where there are often a handful of other people—golfers, joggers, amateur dog trainers, you name it. However, today we had it to ourselves. The breeze seemed ideal, with almost-moderate gusts coming through from minute to minute.

The Simple Diamond kite popped into the air with ease and was soon floating on about 10 meters (35 feet) of line. This was just right for the obligatory three or four snapshots with hardly any zoom necessary. From there, I let the kite out to about 20 meters (70 feet).

With the camera tucked away, it took us a minute or two to walk across the oval, letting out line all the way. Easy peasy! There was 30 meters, 60 meters, and then 90 meters (400 feet) out by the time we reached the other side.

The line tension was firm but not excessive, so it was just a matter of pulling loops off the winder a few at a time and letting the line slip through my hand. The kite followed along obediently, floating at 30 or 40 degrees to the horizontal since it wasn't being given a chance to rise any higher for now.

At this point we turned and headed off upwind to give the kite more room. This was just as well, as you'll find out later.

A low log fence surrounded the oval, and with all 150 meters (500 feet) of line out, I wound 5 1/2 turns around the horizontal railing. With this number of turns, the friction was enough to stop any slippage, even with no tension at the winder. The Simple Diamond kite settled out at just over 45 degrees of line angle, occasionally pushing up a little higher to 50 or 55 degrees. In terms of altitude, that was between 350 and just under 400 feet above ground.

The simple single-point bridle meant the kite was in constant motion. There was very little fish-tailing today in the delightfully ideal wind strengths, but the wing-waggling was always there. This is typical of two-point bridle diamonds too. And this brings us to the first failure:

The tape spar-caps had become somewhat brittle and partially unstuck since I first made this kite. So I had replaced a couple of them before coming out to fly. Guess what happened to the one I had decided was OK:

Yep, it gave way and down came the kite all the way from 350 feet! With one side of the sail completely folded back, the kite executed a stately slow nose-first dive, tail streaming behind and above. The Simple Diamond gently contacted the ground with no other damage.

After this surprise, I fixed the spar cap on the spot and sent the kite straight back up. It waggled its way to where it was before, in seconds.

As the months go by, the insulation tape on these kites can let go a bit, but it's so quick and simple to fix. You just have to get in the habit of taking that spare roll of tape with you every time you fly! Just in case.

Again, the Simple Diamond kite spent a considerable period of time high up in the overcast sky. Perhaps half an hour or more. What happened next was not so much normal wear and tear, but a small design flaw. With the constant wing-waggling, the single strip of tape holding the nose of the sail to the vertical spar gave way—despite being freshly applied before we went out to fly! The kite bellyflopped gracefully to the ground, on a tight line.

So, I'll be updating the instructions shortly, to recommend adding a second strip of tape to the nose of the kite, at right angles to the first one. After doing this today, there was no more trouble.

The Simple Diamond kite probably logged almost a couple of hours of flight time today. It was a pity there was not more sunshine, but otherwise it was a pretty successful and enjoyable outing.