Good Reliable Kites at any Size!

Rokkakus are originally from Japan, but have been enthusiastically taken up by many Western builders and flyers. Although the authentic kite was a fighter, most roks you see at festivals are simply made for their performance and reliable flying characteristics. The hexagonal shape also presents a handy canvas to show off tasteful art work!

Our little 1-Skewer Rokkaku design requires a tail, but is then a good moderate-wind flyer. Initially, we made a few in clear plastic, while experimenting with a few details of the construction. More recently, this kite has been made more visible by doing the sail in orange plastic and using a simple ribbon tail made from black plastic.

Next up in size comes the 2-Skewer Rokkaku, which prefers fairly light winds. It's a wonderful kite to fly on those light-wind-and-thermals kind of days! In fact, this would have to be one of my very favorite Skewer Series kites to fly in thermal conditions.

The only drawback is getting a sore neck from looking straight up all the time!

Later, we started making larger kites like the Dowel Rokkaku. This one has a four-leg bridle, which keeps the kite very steady and predictable most of the time. This kite also likes to go directly overhead when given the slightest help from warm rising air!

Finally, the huge Multi-Dowel Rokkaku came into existence, with its five-leg bridle. An initial prototype proved too floppy and couldn't cope with anything but very light wind. So the sail area was cut down somewhat and the current version has proved to be a good light-wind kite, flying on 200-pound braided Dacron.

Down below is a photo or two and a video of all the MBK Rokkakus. This illustrates the end result, in case you decide to use our instructions to make one of these kites. 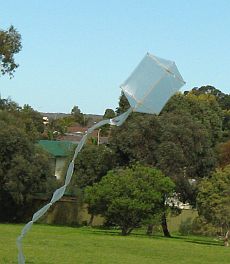 The original was made from clear freezer-bag plastic, which made it almost impossible to see against a gray sky. It's a good little moderate-wind flyer though, with that tail for extra stability. 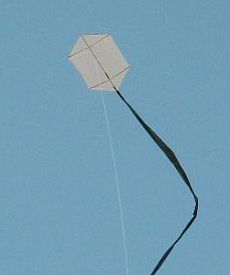 Here's the latest version of the 1-Skewer Rokkaku, in orange garden-bag plastic.

The tail is cut from a cheap black garbage bag. The long ribbon tail helps the kite cope in moderate breezes, keeping it pointed into the wind.

Check out the video below, which shows this kite trying to stay up in a very light breeze and quite gusty. Shortly after, the kite ended up on the grass below. 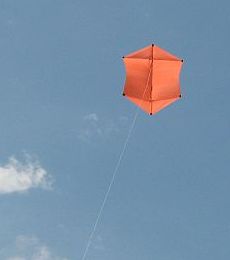 The 2-Skewer Rokkaku has a span of two skewer lengths, or about 58 cm (46 in.) On a 20-pound line, this kite loves thermal weather and scoots around directly overhead when in rising air.

The kite pictured has two-ply plastic which makes it a little heavier, but it is still a great performer in light winds.

The video below shows this kite flying in fairly ample wind. See how stable it is, despite having no tail!

Rokkakus built from skewers and plastic are very efficient, as long as the wind strength doesn't go too high. In stronger wind, they distort. Then the kite really starts to drag at the wind and is forced to fly at lower line angles. 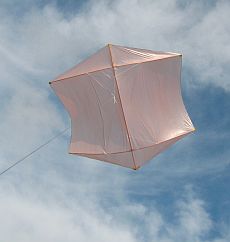 For quite a while the largest of the MBK Rokkakus was the Dowel Rokkaku. With plenty of sail area, this one does well in light conditions despite the extra weight of dowel.

Size? It's about twice as tall as the 2-Skewer Rokkaku, so that's about four times the sail area.

Compared to the 1-Skewer Rokkaku, the Dowel Rokkaku has about 16 times as much sail area!

The video below was taken at a local field and gives a fairly closeup view of the kite in flight. Even inland, this kite tends to fly smoothly and requires very little breeze to get going. 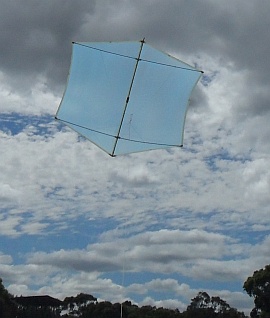 The huge 2.4 meter (8 feet) span Multi-Dowel Rokkaku ended up going to four prototypes before I was satisfied with how it flew. For example, the first attempt was just too flimsy and proved to have a very low and narrow wind range. It was more like a giant indoor-kite design!

Later versions tried different bridling, with the current version using five legs. But in the end, it was hard to improve on the time-tested traditional concept with a four-leg bridle.

Size? It's about twice as tall as the Dowel Rokkaku, so that's about four times the sail area.

Compared to the 1-Skewer Rokkaku, the Multi-Dowel Rokkaku has over 60 times as much sail area!

In the video below, the big Rok is flying sedately in a light-to-gentle-strength breeze.

That's about it for this page on rokkakus—in four convenient sizes!