Today was an attempt to get some better sequences of time-lapse photos to illustrate a "float-out launch." The kite was the very reliable light-wind rok made from 5 mm dowel and thin bag-plastic. 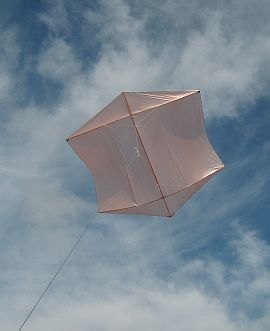 Unfortunately, the breeze down low was too soft and inconsistent for even this very stable kite to be let out across the grass. The kite would go out a few meters here, a few there, but it always would have to be pulled back in just to keep it off the ground!

At one point, with the help of some rising air, the rok managed to claw its way to an angle clearly more than 90 degrees! Eventually it nosed down, swung around, and then recovered downwind.

The thought occurred that perhaps the beach would be the ideal place to illustrate a float-out launch, due to the more consistent airflow.

Toward the end of the session I noticed that the cool air had smoothed right out, up where the kite was. This doesn't happen often at inland locations! The big pale-orange rok just strained away in much the same spot for a few minutes, at about a 60-degree line angle. The kite was almost motionless at times, as was the flying line. None of the usual line twitching was to be seen.

A minute or so with the wind meter held at shoulder height recorded an average speed of 5.5 kph and a peak of 8.8 kph. Over a longer time period I'm sure the average would have been much lower. Up high, the breeze felt like a good 12 kph most of the time.

Down at Christies Beach, we found a patch of dry sand which provided ample space over which to fly. While holding the wind meter at shoulder height, it registered around 9.5 kph gusting to just over 11 kph. That small range indicated fairly smooth air, as was expected since it was coming from across the ocean.

Just like the roller yesterday, a few small pieces of tape were required to secure some of the spar tips to the sail. This kite hadn't been flown for quite a while either!

With the breeze so very smooth, it was possible to take some video on only 4 or 5 meters (15 feet) of line. This kite has never been recorded in such clarity before.

In the process of letting line out and climbing the kite again, it became clear that it was slightly out of trim.

At low line angles, with more strain on the sail, the rok leaned over and drifted far to the left. As the line angle became steeper, and line tension eased, the kite smoothly righted itself and continued to climb straight up. This pattern happened several times as I let the line out in stages. Never mind, a small tweak of the upper sliding knot of the bridle should be all it needs.

One of the leaning episodes took the kite far too close to the esplanade and its traffic. So I had no choice but to pull in very quickly to clear the road. This forced the kite down onto the embankment. Fortunately, during a slight lull, it was possible to pull the kite off and into the air again. No damage was done.

After packing up, another wind check revealed the breeze had moderated down to 7 kph, gusting to 9 kph. Ultra-smooth beach flying like this makes a change from the somewhat less predictable experience of flying inland!

Yes, it's another flirt with danger over the rooftop—this time with the Dowel Rokkaku.

To begin with, the air was somewhat gusty despite a quite low average wind speed. This did cause a few problems. Getting the kite's nose stuck in the gutter after about 30 seconds of air time was the first. A few short and scary flights later, I was pulling it out of one of our small trees. There was no great drama there. I got a few small pin pricks from the rose bushes on yet another flight. But eventually, as the sun dipped towards the horizon, the air settled down.

With more constant wind speed and lower strengths overall, I gradually put the big pale-orange rok up higher and higher over our roof—maybe out to 25 meters (80 feet) or so. A couple of trimming changes with the bridle knots also helped to keep it flying straight and true. With dark rain clouds in the not-so-far distance, the big Chinese character on the kite was appropriate—"clouds."

The Dowel Rokkaku kite eventually tired of trying to stay airborne and slowly descended toward the roof. Just like when the Dowel Delta went up a few days ago. A little line-handling ensured that the rok made it over the gutter. Whereupon it floated onto its face and proceeded to glide straight toward me like a paper plane. It was an easy catch in one hand! So ended another backyard sunset flight. And it was a great sunset too.