Soaring Over the Sand

After much rain earlier in the week, today looked more promising for flying the new parasail kite. Even so, large areas of the sky were occupied by low and mid-level cloud. Down at Christies Beach with Aren, my 10-year-old, the wind was measured at 15 kph gusting to 20 kph over the damp sand. 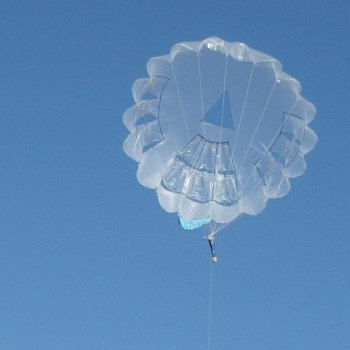 We had also brought an MBK 2-Skewer Rokkaku in case winds turned out to a be a bit light. Not today! So, the little orange kite remained on the car's back seat.

Within minutes of our arrival, we had the MBK Parasail kite in the air on a short line.

Aren was interested in holding on for a while to see how much it pulled. He knew that the first prototype was a fairly hard puller for its size. But he only lasted a few seconds as I explained to him that this kite was somewhat bigger. And therefore it would pull even harder!

A day or two earlier I had partially closed up the vents on one side, to correct a turning tendency. However, today I had them opened again to try another idea for trimming the kite straight.

Sure enough, the initial low flight on a short line again showed persistent looping to the left. Once again, I stuck a piece of tape right across the top vent on the right hand side, which had some effect. Wider loops to the left occurred during the strongest puffs of wind.

However, the kite was flying well enough most of the time to get some photography underway.

A number of still photos were taken quite close to the kite as it flew on a short line, anchored to my bag of tricks on the sand. Not too surprisingly, the bag did shift along the sand a couple of times. This was due to a combination of the smooth damp surface and a kite with very decent pull for its size!

After a few minutes it was time to let the kite fly around with more freedom for a while, on a much longer line. There was much traveling from side to side, which probably indicates that even more weight is required on the drag plate near the bottom edge of the flying sail. Or it could be called the pendulum plate! It actually performs both functions.

Deciding it was time to better fix the turning problem, I went right up to the kite by running my hand over the line. The sail responded immediately to pulling on just one bridle line on the right side.

Hence came some experimentation with shortening one then two of the bridle lines on the right hand side. This was effected by forming a small loop in the line and then holding it in place with sticky tape. This would make it easy to undo later if necessary.

With a just couple of slightly shortened lines, the parasail kite flew much better. That is, after an initial overcorrection to the right which threatened to land the kite in sea water! The tide was coming in.

Stability was still a bit marginal in the strongest gusts, as I retreated to climb some concrete steps. But some interesting footage was obtained by zooming in on the kite as it flew back and forth. Sometimes it disappeared behind a wall of rocks before rising back up again. Possibly after contacting the sand, the kite would roll and bounce back into the air. It had been seen doing this before!

During slight lulls in the breeze, the plastic parasail would straighten up and approach its best flying angles. But you can never expect too much, in that regard, from a round parachute!


A small flock of seagulls approached the kite from downwind, getting in closer to observe the translucent stranger in their midst.

Eventually the kite attracted a few human observers as well, watching from the Esplanade hand rails or while walking along the beach near the water's edge. Perhaps the word jellyfish had flashed through their minds at some point! We've heard it before, when people first see this kite in the air.

So, it turned out to be a useful flying session with the rather unique parasail kite. The weather had been sunny at first with ample breeze throughout. It was good that plenty of camera work was done early though, since thickening cloud began to reduce the light levels after a while. Not to mention the fact that it was now less than an hour to sundown.

One day this tape-and-plastic design might really strut its stuff in thermic conditions, taking a ride overhead on rising air—on a really long line! However, being basically a parachute, even this second prototype is struggling to hit a 45 degree line angle most of the time, in smooth horizontal coastal air. But the fun factor of the MBK Parasail kite is still high despite the modest performance! 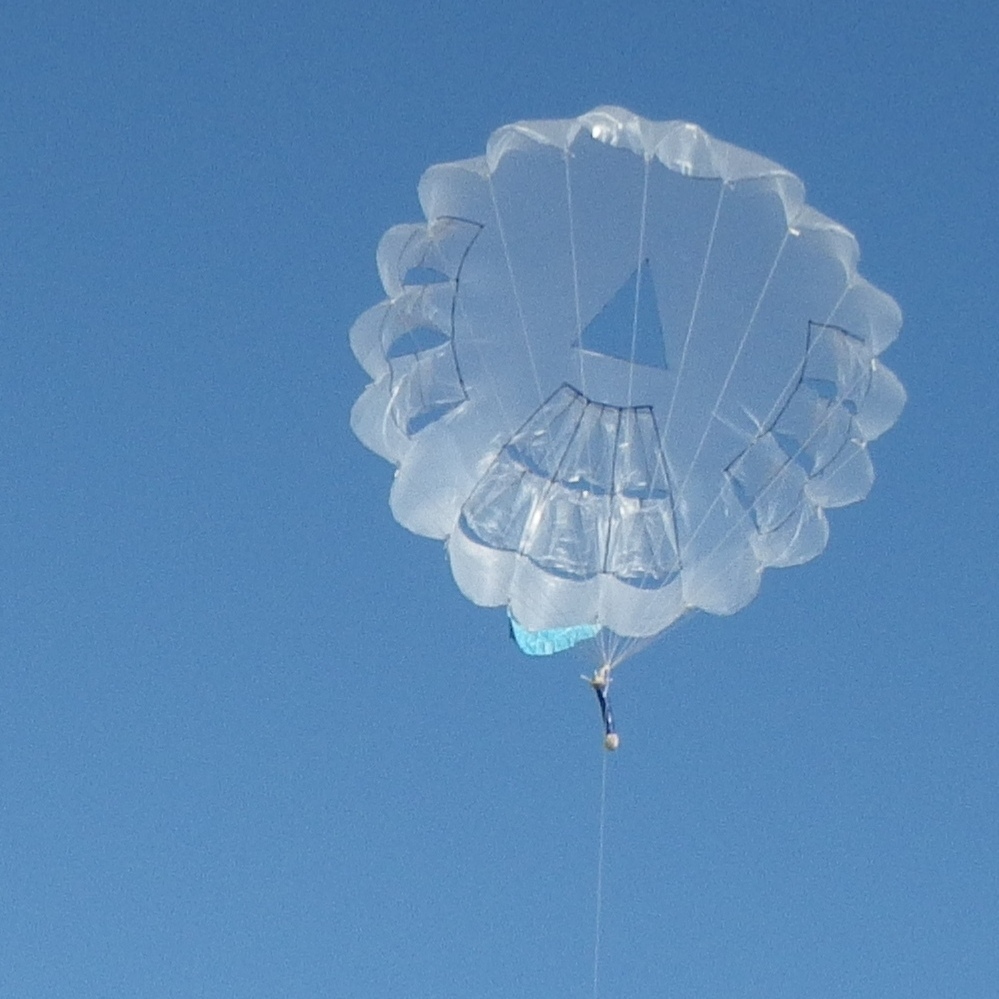 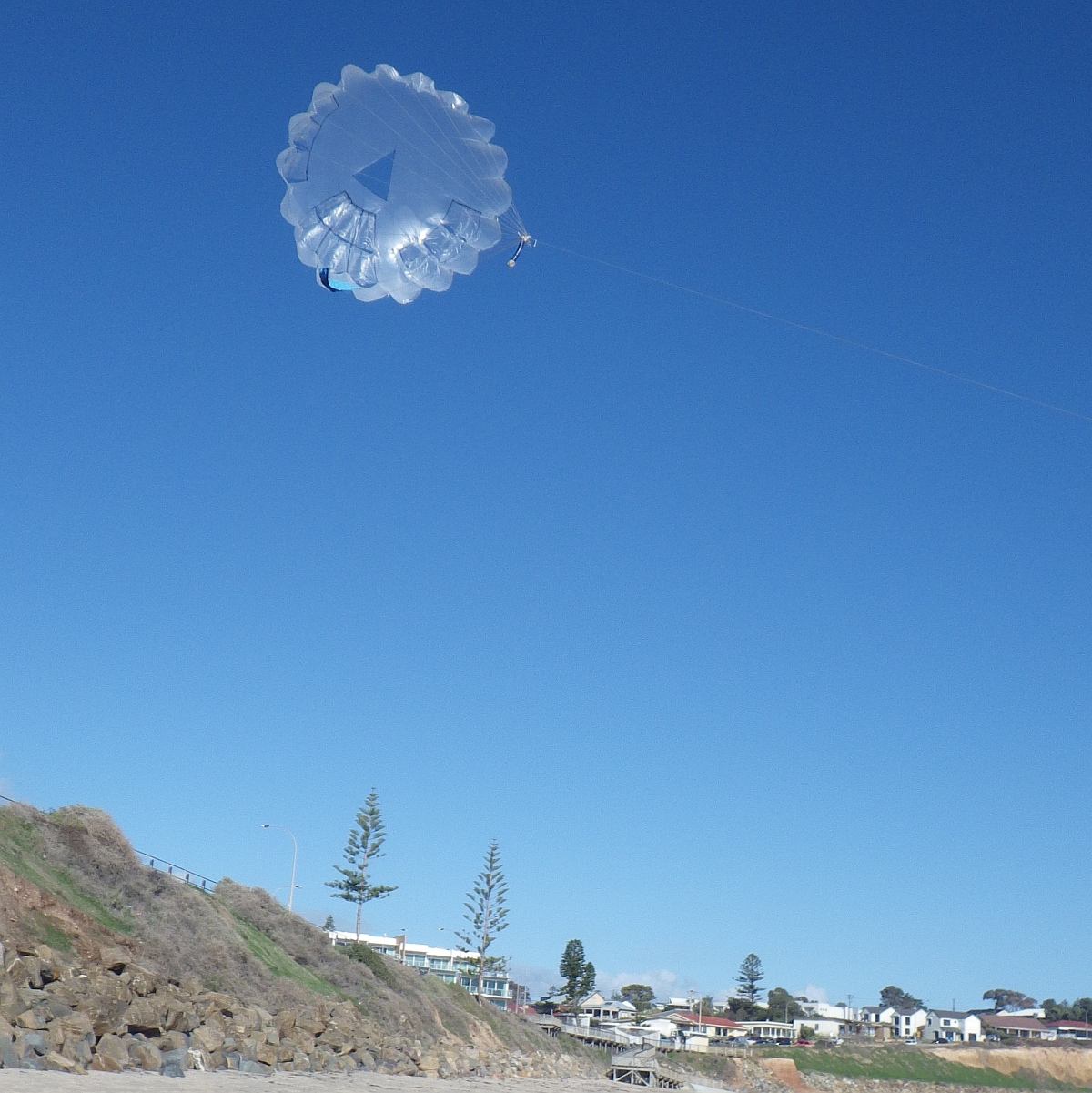 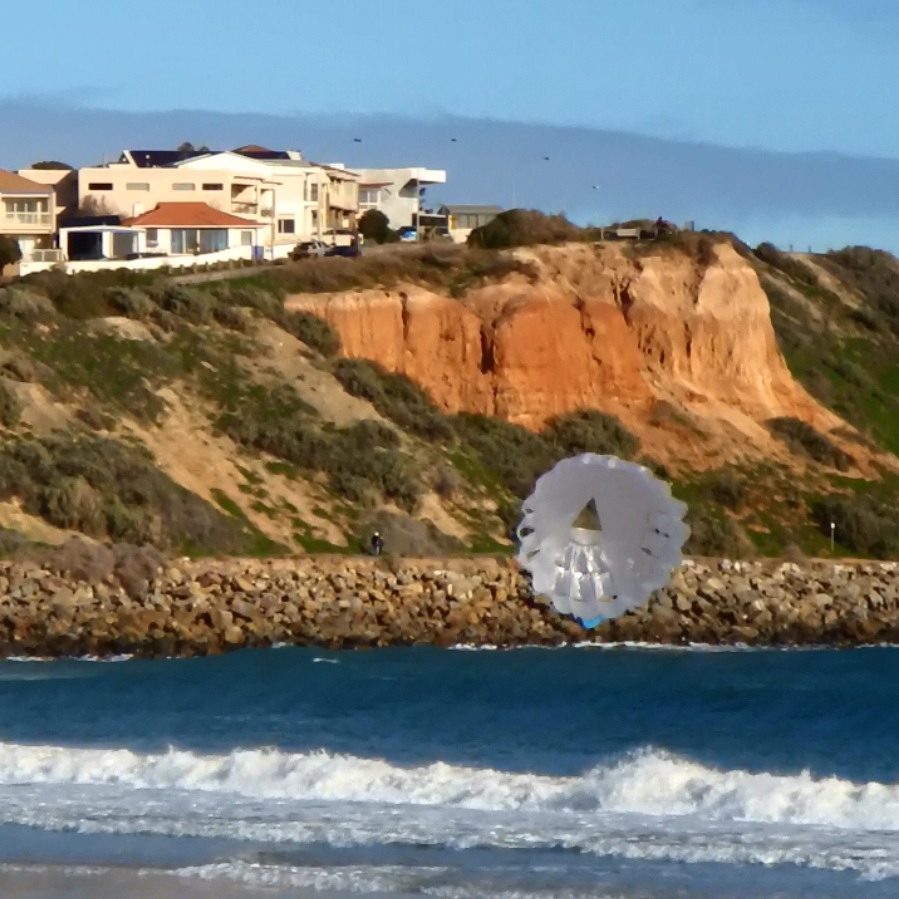