The parafoil kites you see in the air at kite festivals can be of the single, dual, or quad-line variety. These are soft kites, meaning there are no rigid spars in their construction. 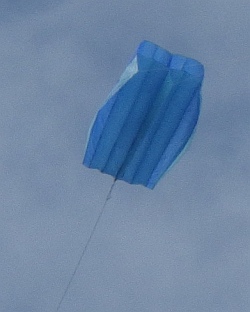 Most commonly, the quad-line kites you see down at a beach or at a festival will be surfing kites, as they tow surfers through the waves and even into the air from time to time.

Most parafoils are not easy to relaunch from water so are not used for surfing.

Single line and dual-line parafoils are flown over the sand, and we have seen too many of these at the local festival to remember them all!

Very few of the parafoils you see will be homemade though. Even a simple one is relatively complex to put together, compared to say, a simple diamond or sled.

Many kids' novelty kites are actually based on the parafoil principle. The giveaway is that set of air intakes at the front! For example, an elephant kite which looks like the creature's head—complete with trailing trunk which acts as a tubular tail!

Here's a summary of the three types of parafoil, which all feature a double-surface sail containing many cells that are open to the airflow at the front:

See if you can identify some of the above types in the listing below! 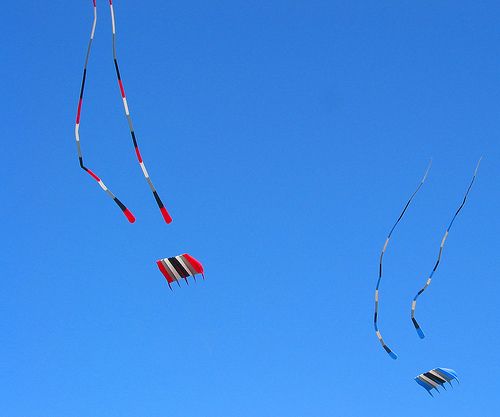 Up there are two colorful single-line parafoils with twin tails. The flat-looking design with multiple small triangular keels is only seen in single-line kites. We've seen a variety of these at our local kite festival. Some can be quite large, requiring a large bag of sand as an anchor or even the tow bar of a vehicle. Simple and bold graphic designs suit these kites best, since the "canvas" is not exactly tabletop flat when you get up close! 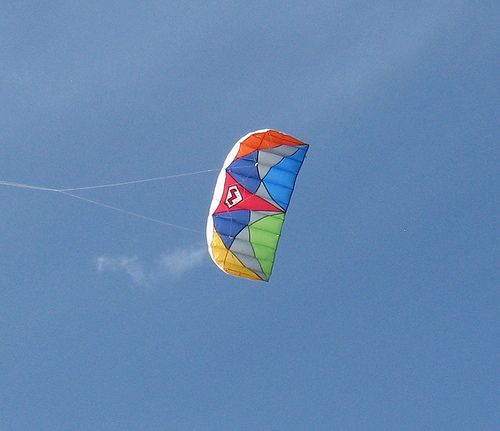 Some small soft stunt kites can be flown in a single-line configuration, like this one. See how the two main bridle lines are attached near the wingtips with shorter lines, like a two-line stunter. However, both bridle lines come together at a single flying-line attachment point. These parafoil kites are efficient and durable, with a solid amount of pull for their size. Very little space is taken up when they are rolled up and put away. 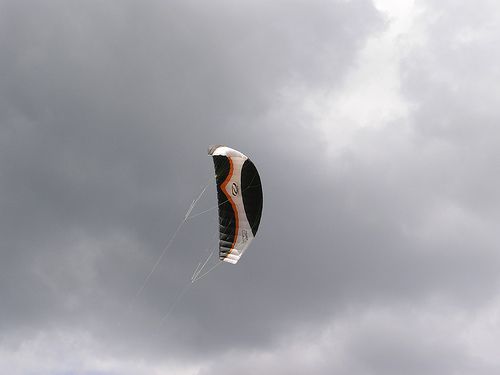 Here's a great closeup of a two-line power kite in flight. It looks a little like a paraglider, not only in shape but also in color scheme. You can clearly see the individual cells running from front to back. The multiple bridle lines on each side and even a few meters of the two flying lines can be seen against the dark-gray cloudy background.

This kite could probably be used to pull something along on wheels, such as a mountain board, or just flown as an overgrown stunt kite. Plenty of fun could be had either way! 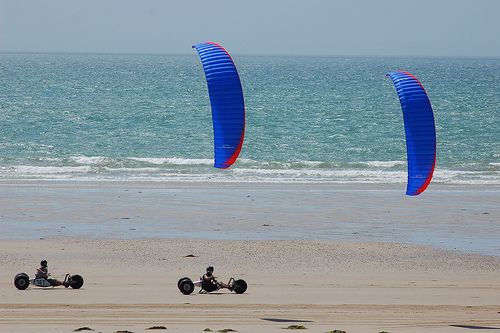 This is a photo of four-line traction kites pulling two 3-wheeler kite buggies on a sandy beach. The guy on the right seems to have a little tension on the brake lines of his kite. Look closely at the trailing edge, near the small white logo at the top end of the kite. See how the blue material is sloping down like an aircraft flap. I guess these parafoil kites are "flying in formation"! 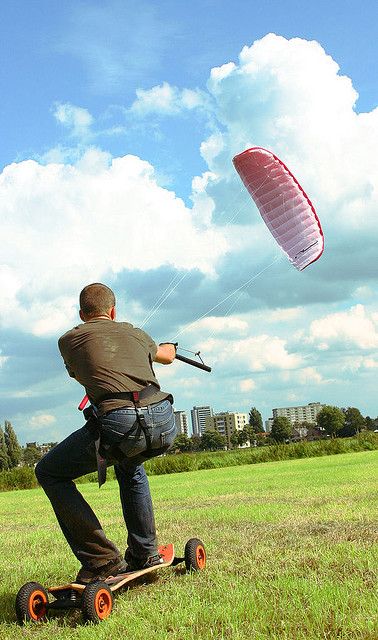 What a great photo this is! It really captures the feel of harnessing wind power while traveling along on a four-wheeler landboard. Sometimes these are called mountainboards since they can also be used for skating down steep terrain like snowboarders do.

See how most of the work is done with those top two lines. The bottom two are used from time to time to brake the kite or for finer steering control.

That's about it for this photographic overview of parafoil kites. Maybe you will recognize some of these types next time you attend a kite festival or similar event. The smaller ones are mass-produced and can be quite cheap.