Of Kite Line and Fishing Line

On walking down to the beach at Brighton with the MBK Paper Sode, it was clear that an ample breeze was blowing. That was a good start. 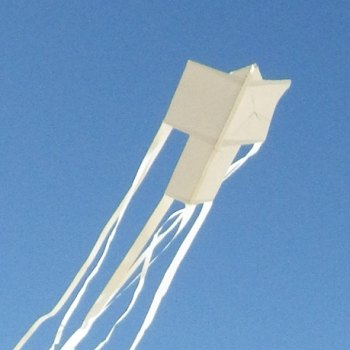 After selecting a spot to anchor the kite, it was very easy to put the little silver sode up in the smooth onshore breeze. Holding the wind meter above shoulder height, for half a minute, the meter registered 14.5 kph with gusts to 17 kph.

The kite had no trouble hovering on such a short line that the tails were just clear of the sand. This was so handy for getting some quality closeup shots with the camera. After this, I let out the thread to around 15 meters (50 feet).

Being early afternoon the sun was very high in the all-blue sky. I took more photos from many angles including from directly below. Plus a couple of short video clips.

Losing the kite was not an option today since three hours of flying time need to be accumulated for the log! Hence the thread length was kept far short of the usual 300 or 400 feet. Hence the kite would fall short of the sidewalk (footpath) and road if the thread broke. A curious dog could also break the thread!

People with little dogs on leads were entering the beach and walking through on a regular basis. However, the occasional mutt ran free — which was a worry! One small dog appeared out of nowhere and walked under the thread quite close to the anchoring bag. This was before I even had a chance to react.

Later, a larger dog approached, but was called back by its owner. Whew. I took to guarding the base of the thread by standing between it and the nearest dog. Then it dawned on me that shifting the bag and picking up the winder would be the best action if another dog approached.

Now, about that reference to fishing line: While standing near my bag on the sand, a fisherman just a few paces away was putting on an impressive display. No less than seven fish were caught while the sode was in the air. That was a fish every six minutes on average, from the open ocean!

I cast my paper kite into the sky but once, while this guy cast his hooks, line, and sinker into the waves many times and got one or two fish each time. That's right, on two occasions he caught two fish at once—one on each hook. Why am I writing about fishing? I don't know really, but it was just remarkable!

(Elsewhere on this site you can combine both passions and read about kite fishing. I kid you not. Search it up sometime.)

After the kite had been in the air for 20 minutes or so, I noticed that the tide seemed to be coming in. It was necessary to keep a close eye on the waterline from time to time in case a quick haul-down became necessary!

Another wind check revealed even smoother air than when first checked. Now it was averaging 15 kph with gusts to 17 kph! So the breeze was not only smooth but consistent today, the average shifting by less than 1 kph.

Beneath the silver sode kite the polyester thread was pulled almost taut and held about 45 to 50 degrees, barely moving. Interestingly, the wind direction did shift around a little. Back and forth over perhaps 20 degrees or so.

With the wind slightly below the middle of the MBK Paper Sode's wind range there was little chance of a line break. The thread will hold near 30 kph, particularly when the kite is flying high. When a kite is pushed past its limit and starts swirling around at low line angles it puts huge strain on the line compared to normal flying. An earlier prototype of the sode did this once and snapped the thread. So, during development, the sail size was adjusted down a bit to make the kite pull less line tension.

Besides the sea gulls and the kite, there were other aircraft in the air. Passenger jets were taking off from Adelaide Airport just a few kilometers to the north of the beach. A couple of light aircraft droned past at fairly high altitudes.

The aim was to get a good long flight to log towards the three hours required for durability certification. With the MBK Paper Sode kite staying up for a 45 minute flight it was mission accomplished! 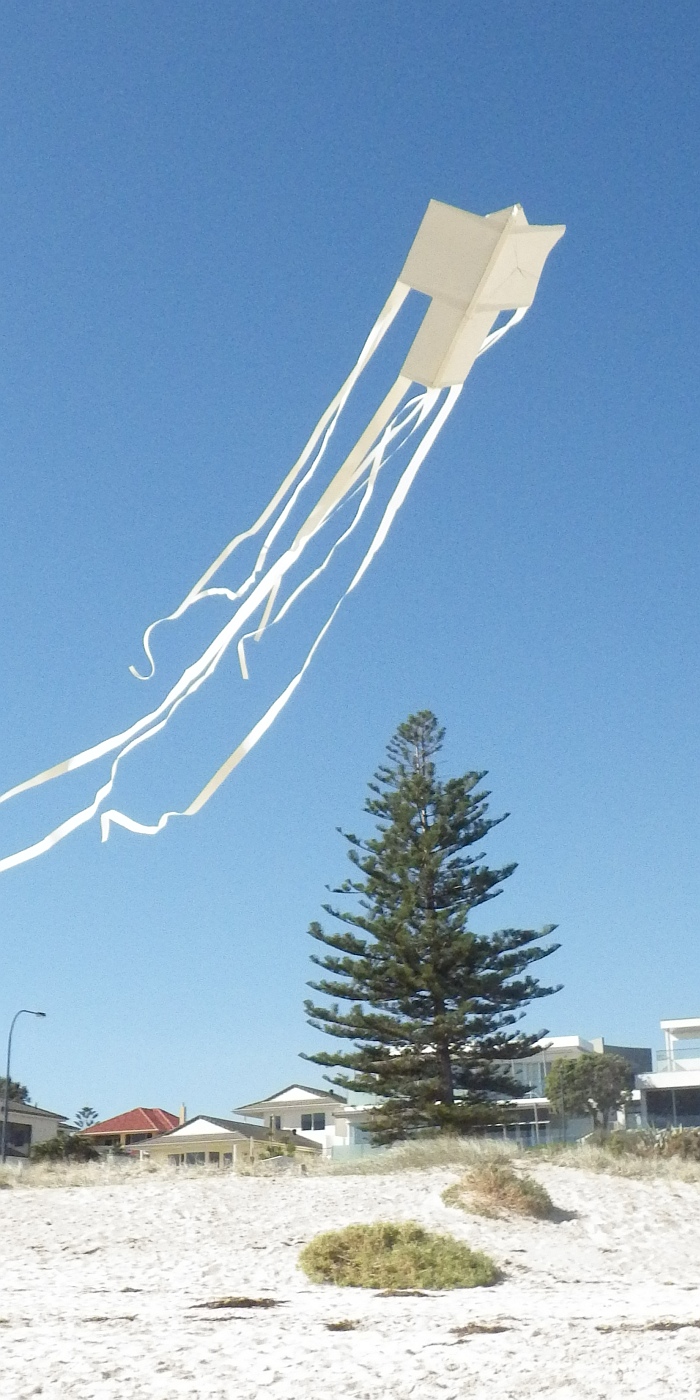 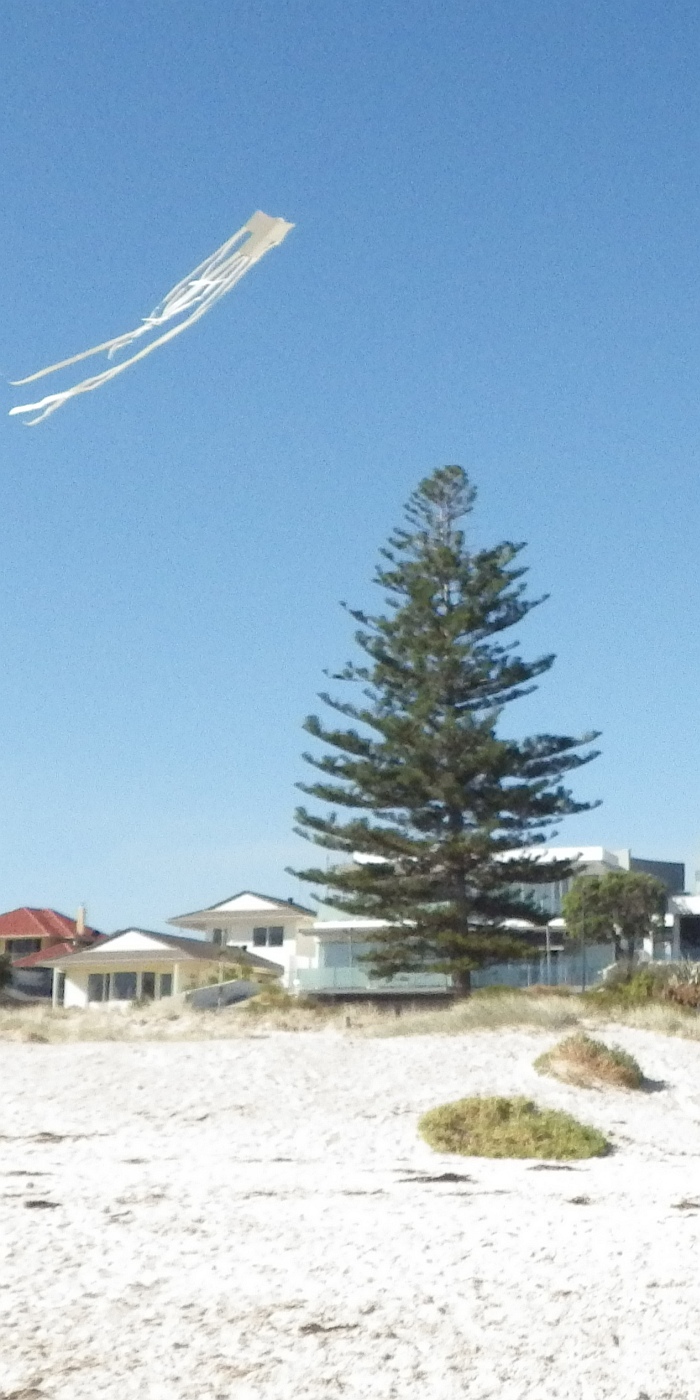 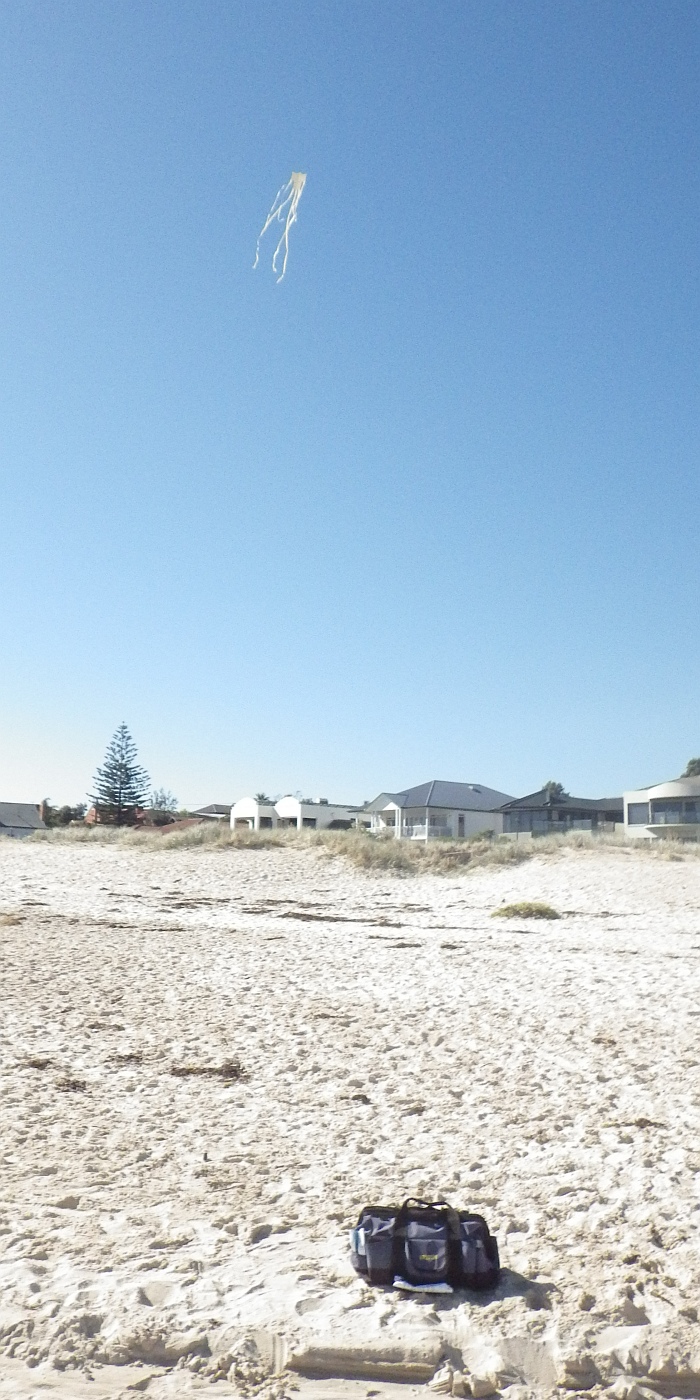 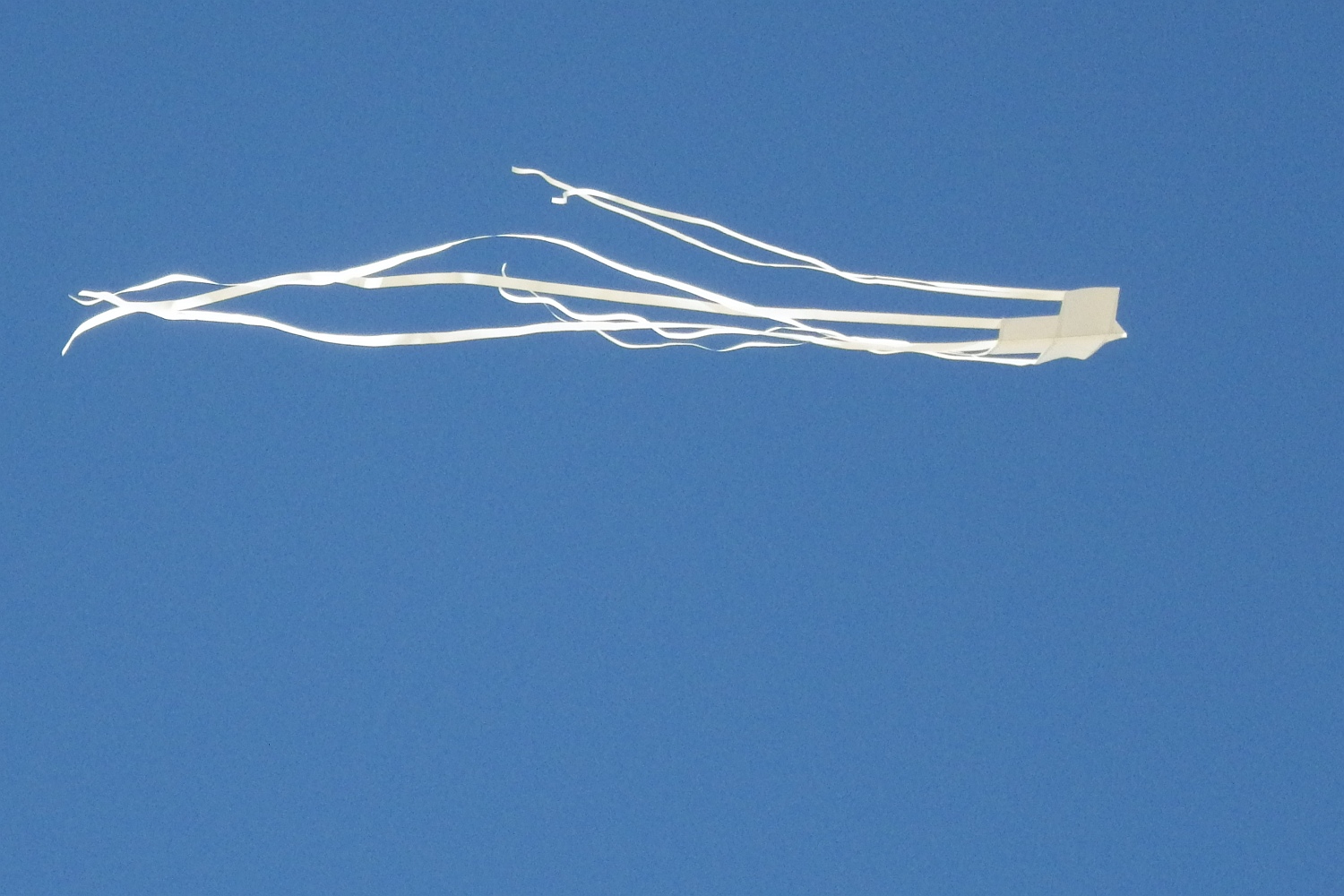 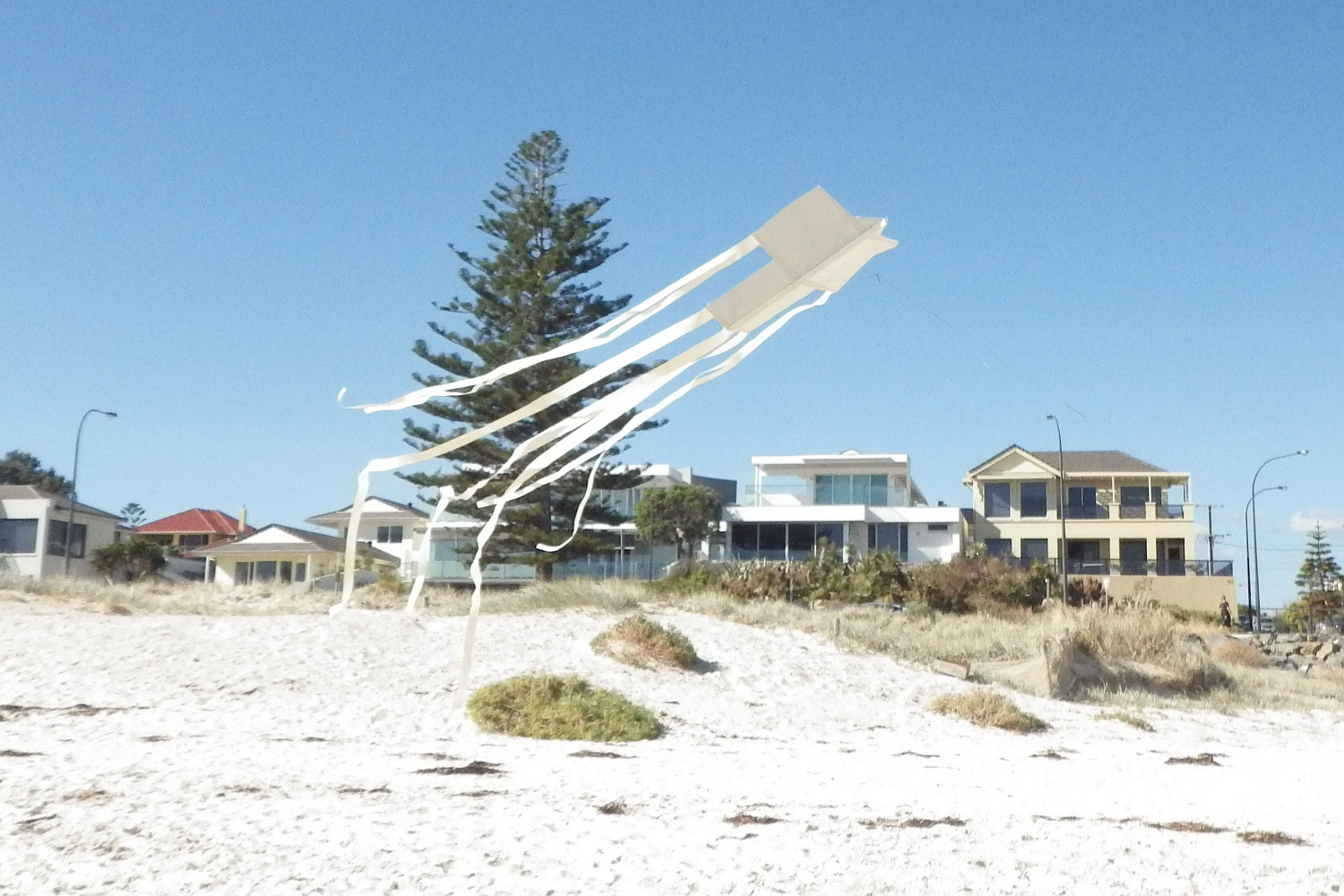 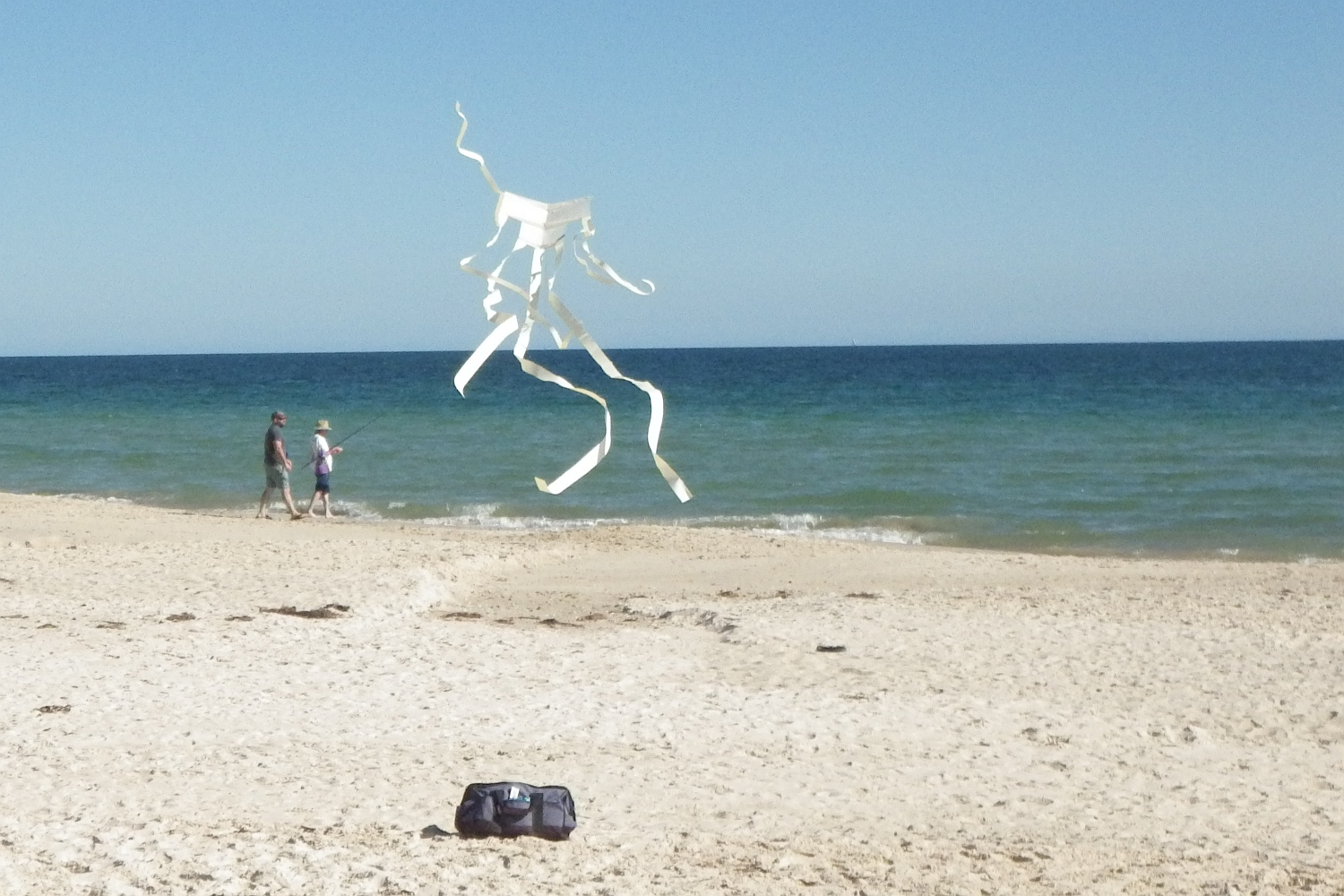