With the MBK Paper Rokkaku kite newly made in colored paper, it was time to fly. The weather had been windy for weeks and today was no exception. This would have been a problem for light wind kites but for an MBK Paper Series design it was just an invitation to fly! Within reason of course. If gusts push past 35 or 40 kph there is every chance of the thread parting! 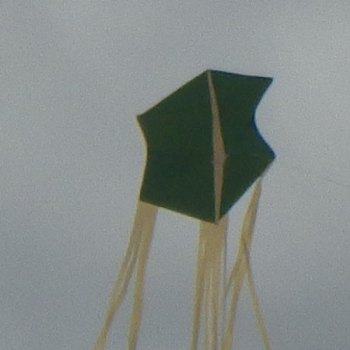 Down at the beach there was clearly plenty of breeze strength. Perhaps the forecast of a 20 kph average was fairly close to the mark. Sea gulls flew past with great speed in the downwind direction. Upwind, it seemed you could sometimes walk faster than the birds were covering ground!

On putting up the MBK Rokkaku kite on a short length of thread, there was trouble immediately.

Sheer gust strength forced the paper craft to loop and smack nose first into the sand. The vertical spar was bent, near where the upper horizontal spar goes across. However, after pinching the V section with finger and thumb, the kite proved airworthy once again.

On a longer length of thread, the kite still managed to contact the sand a few times. Thankfully, the nose portion of the sail always managed to retain its shape in the air, even with the slightly weakened spar. It looks like I got the sail area versus spar strength about right at that point.

For a breeze along a beach it seemed uncharacteristically variable. Speeds were varying all the way from just 7 or 8 kph right up into the fresh range—the mid-30s in kph! Then I looked upwind and realized that the breeze was coming right over large buildings and high terrain just a short distance away. A small wind shift to the west would have probably smoothed things out, but it was not to be.

Soon, after taking some photos and video, I let the green rokkaku up on about 20 m (65 ft.) of line. Such was the breeze that I could simply let the thread pass through my fingers while the paper winder danced around on the sand below. The winder was giving up thread loop by loop in quick succession.

At the new greater height the kite's occasional loop or dive had no consequences. The kite would just recover in the slower air down low and then shoot back up. Lulls would allow for periods of steady flight or even slow descents.

For a different perspective I raced up the concrete steps and took photos looking straight across at the flying kite anchored below. While up there next to the esplanade, the wind died down for a few moments. This allowed the kite to hover nose-up not far from the sand, tail streamers floating horizontally behind. See the photo in the gallery down below.

Bringing the Paper Rokkaku down was a delicate procedure. Any sudden jerk on the line could easily snap it during moments of high tension. So it took quite a few minutes of patient winding.

Eventually the little green craft came to hand. The next step was to gather all the tail in several loops. Holding the nose portion of the kite together with the loops of tail paper, I departed back to the car—allowing the kite to weathercock in the breeze to prevent bending any spars!

In the end it was not a bad outing although smoother air would have avoided a few dramas. Perhaps I could have waited more patiently for sunny breaks to take the photos of the MBK Paper Rokkaku kite. But see what you think, looking at the image gallery below. 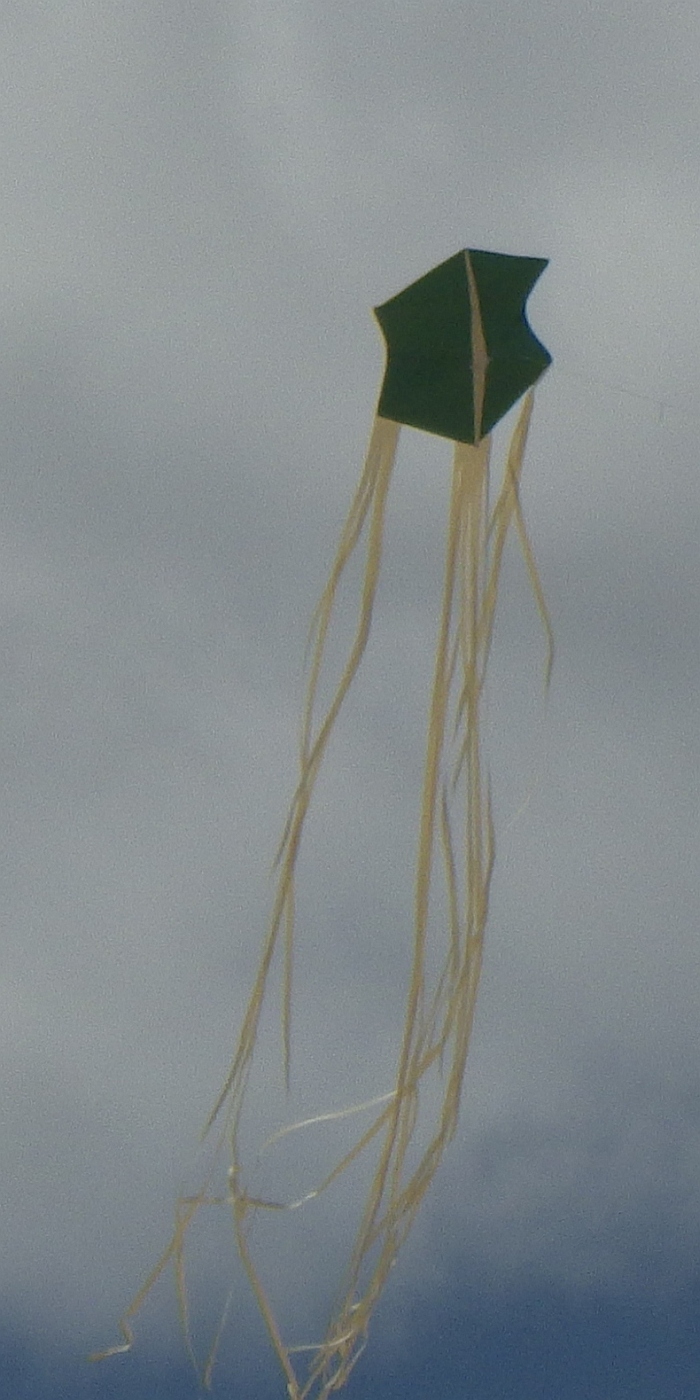 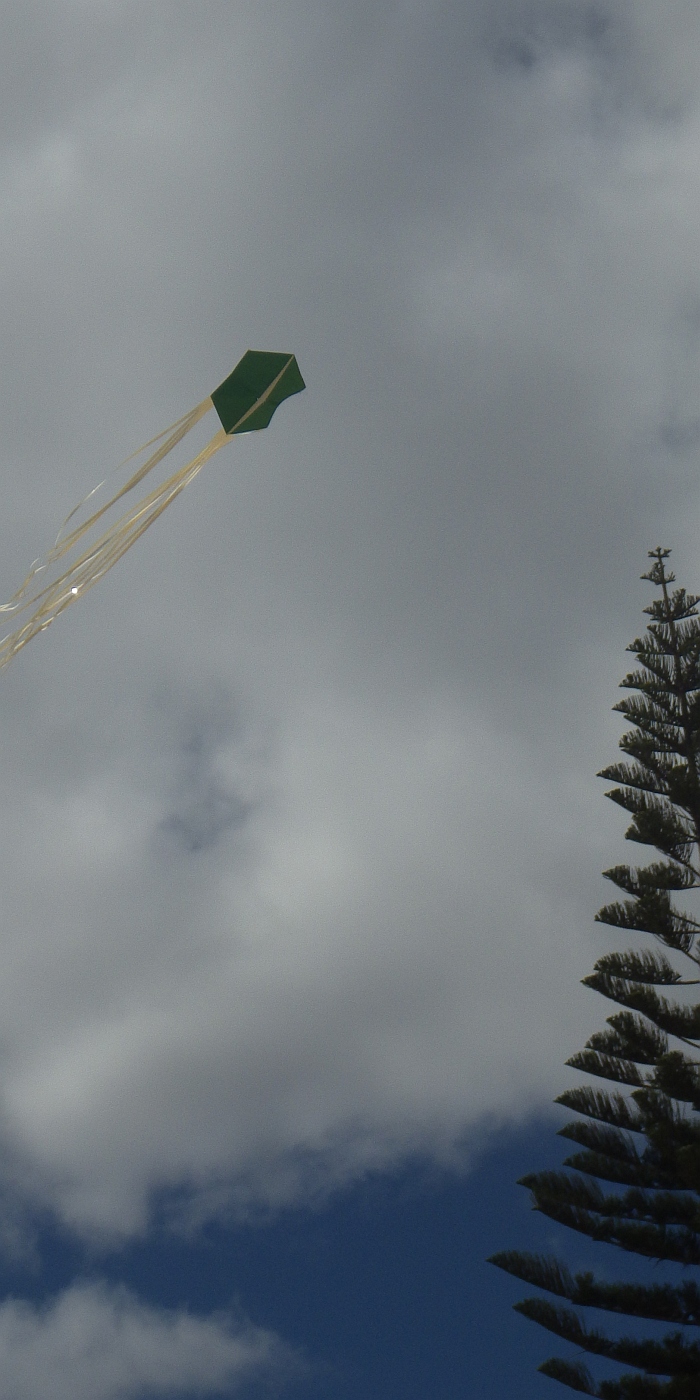 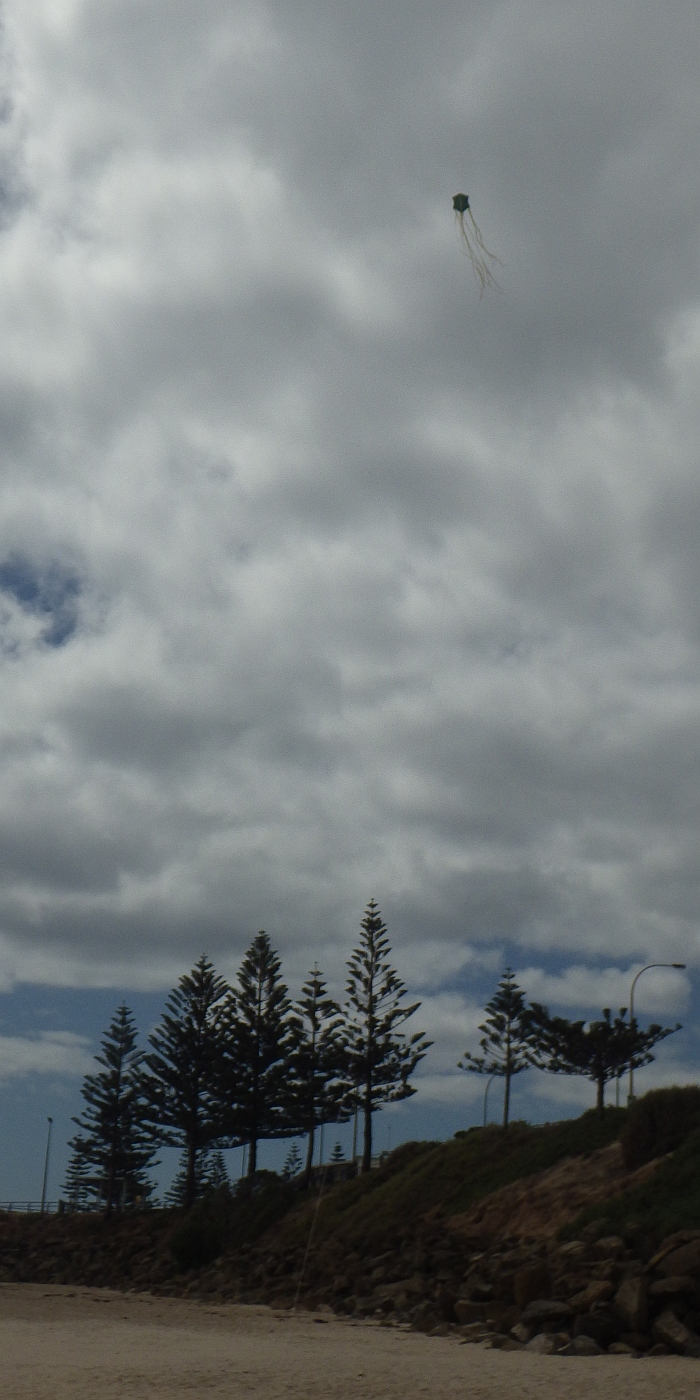 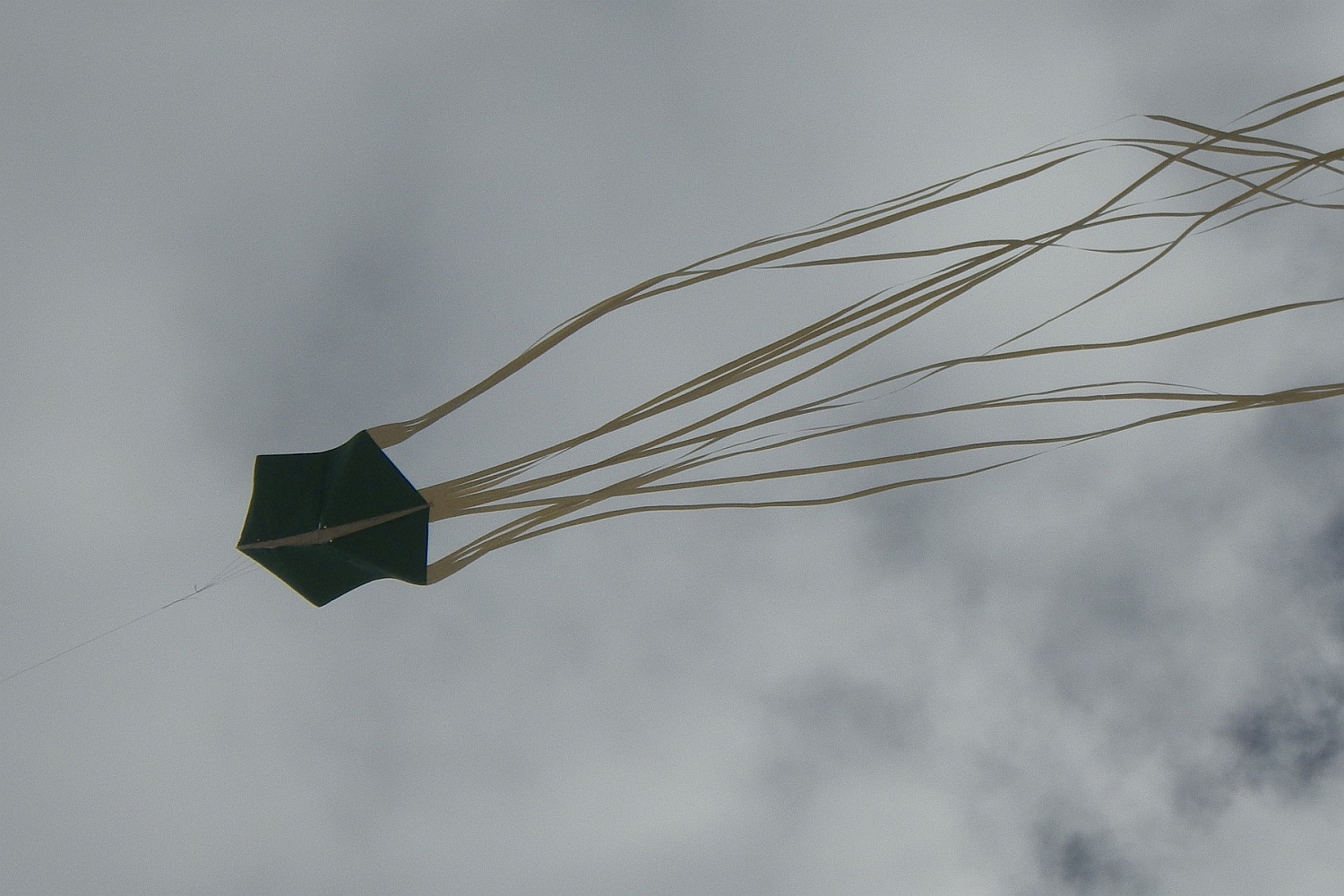 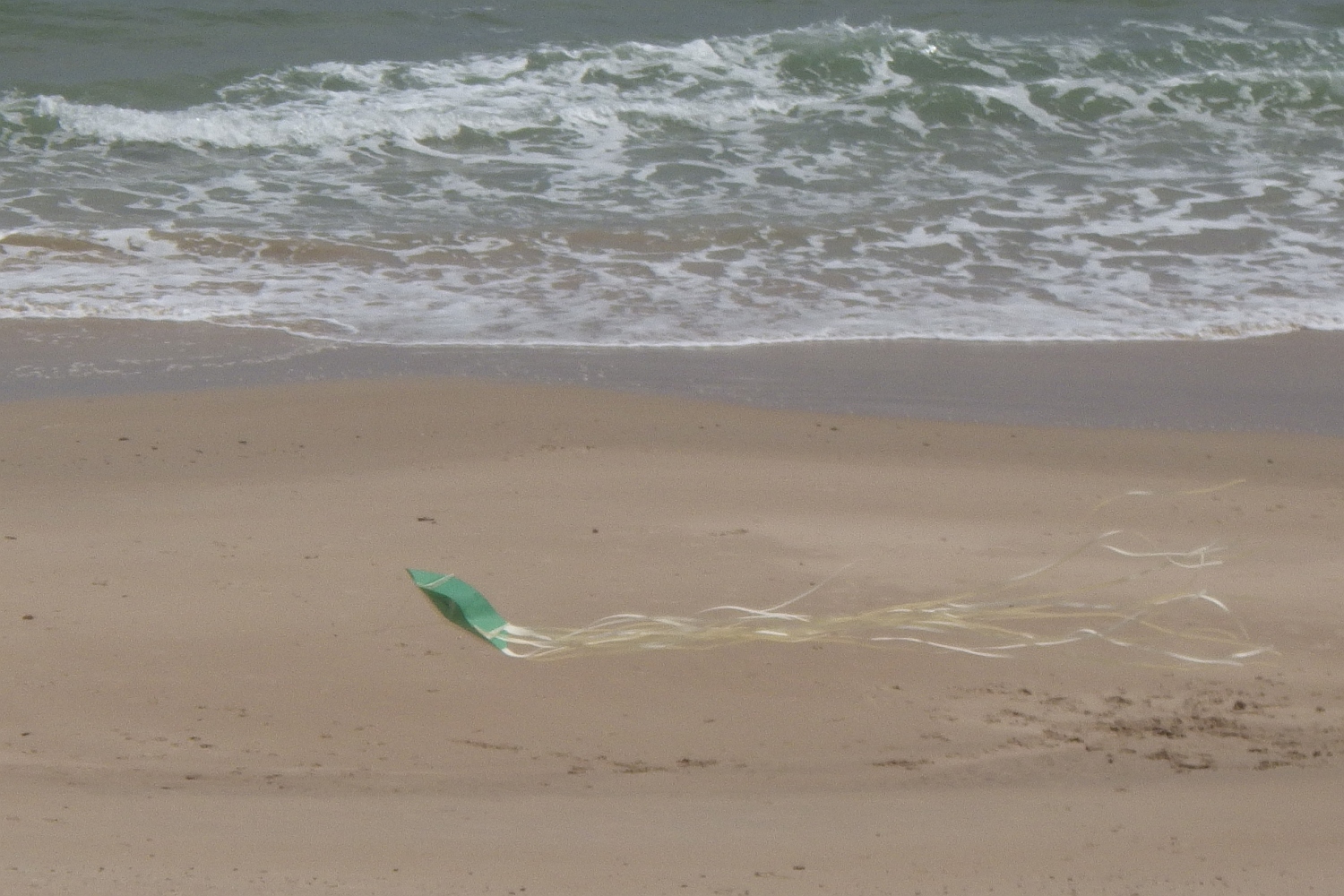 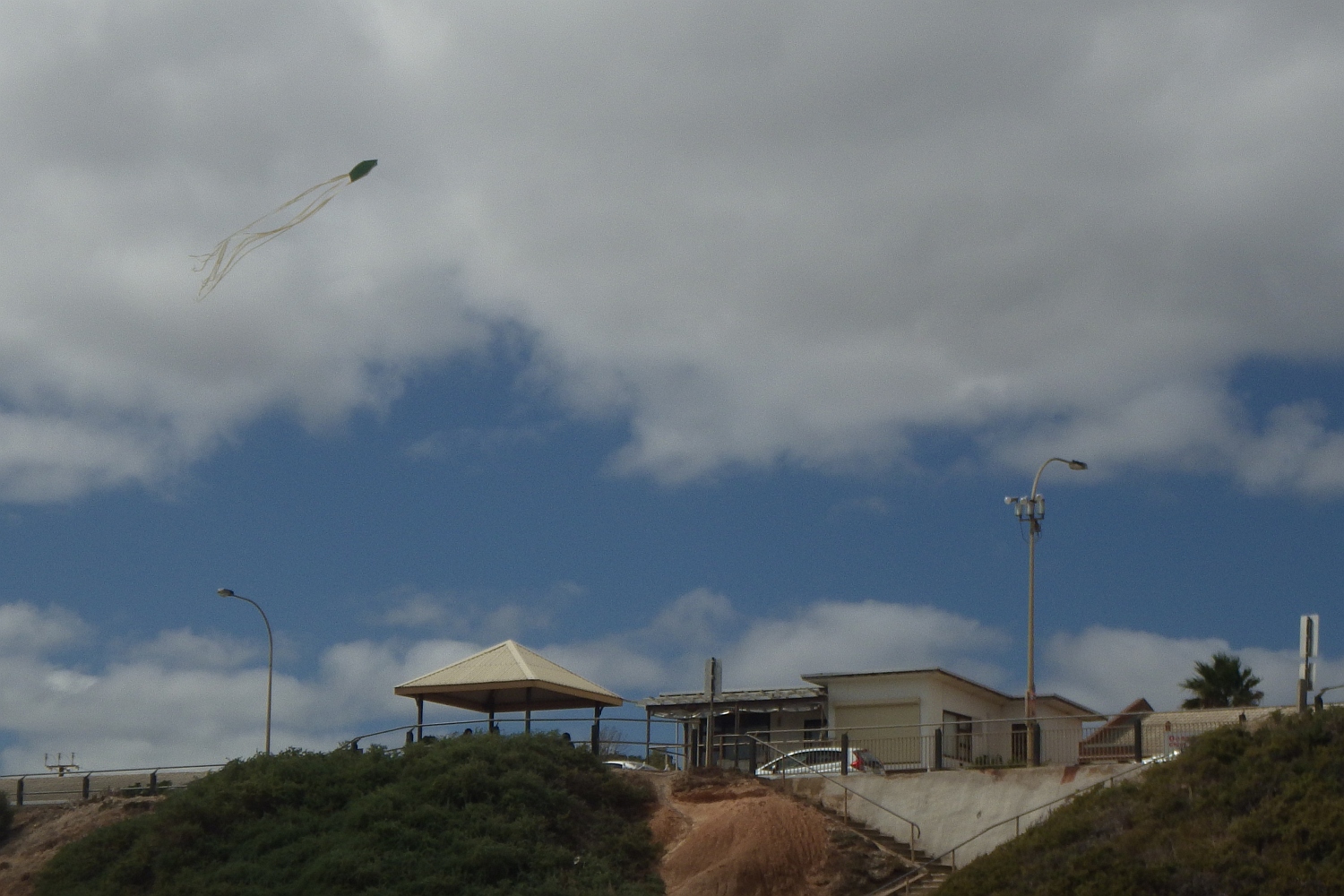