After about four plain-paper prototypes of the MBK Paper Delta kite and at least a couple of spar refits, the final colored paper version has flown. Usually I play safe and do the photo session for the image gallery and e-book cover down at a beach. 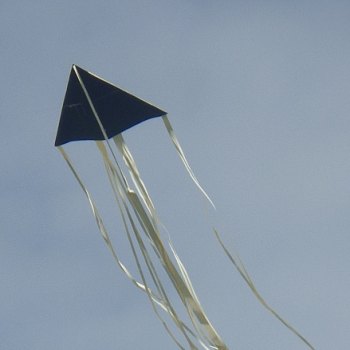 In sunny weather, with a gentle strength onshore breeze, there's predictable flying and safety for the kite. Not to mention opportunities for great closeup photos. It's possible to practically stand next to the kite as it hovers steadily over the sand on a short line.

Well, the sun was out today in a largely blue sky but the breeze was easterly.

That was no good for the beach. A little accident with the thread and it would be goodbye kite—into the waves! And unflyable weather was on the way for the rest of the week.

So it was now or never.

It was decided to try a large grassy area adjacent to a large shopping complex. If you check out the KAP section of this site you will find some aerial photos of the buildings and massive outdoor car park of the Noarlunga shopping complex.

There were trees surrounding the field, but they weren't too high. All the better for some smooth air to launch in!

Just before leaving home, a very nearby weather station was reporting 16 kph with a gust to 22 kph. Perfect! The day was warming up though and thermals were beginning to develop.

Predictably, being inland, several attempts to fly on a short line resulted in fairly short flights. The Paper Delta would have been up for less than 30 seconds each time, most probably. This was despite moving to the middle of the field to escape wind shadow from the trees. But plenty of photos were taken from various angles.

A number of boys were looking on, from the adjacent school grounds. Was it the kite—or the sight of an old guy fussing around with a small kite and a camera?!

The next step was to let out more thread and get some high flying shots. At the same time I moved upwind to allow more space downwind in case the thread broke. Can't be too careful in that respect; I've lost a couple of paper kite prototypes that way!

A passenger jet loomed up, quite close in direction to the kite. Unfortunately I was a bit slow on the shutter this time. Living less than 20 km from an airport, it's not uncommon to have an Airbus or Boeing photobomb a kite shot.

As the morning progressed, the average wind speed started to creep up. However, the gusts were really getting going, causing plenty of leaf noise from the trees upwind.

The bridle setting seemed to be keeping the kite a little low. So I shortened the rear bridle line by tying a tiny loop knot into it and tried again. Maybe it was a smidge too far back but the little black delta certainly went higher than before.

The strongest gusts were now causing some distortion in the kite frame and a fair amount of furious S-bending from side to side. Almost to the point of looping right around. But everything held. Some video was taken, and then some more after I had brought the delta down much lower.

At one point while lowering the kite, I accidentally trod on the thread and snapped it. Between my flying hand and the anchor bag on the grass, thankfully! It was straightforward to find the two ends and do a repair on the spot.

On arriving home I checked the weather station again. It had been blowing 22 kph with a gust to 26 kph around the time I left the field. So, the black Paper Delta had flown through pretty much the whole of its designed wind-range. 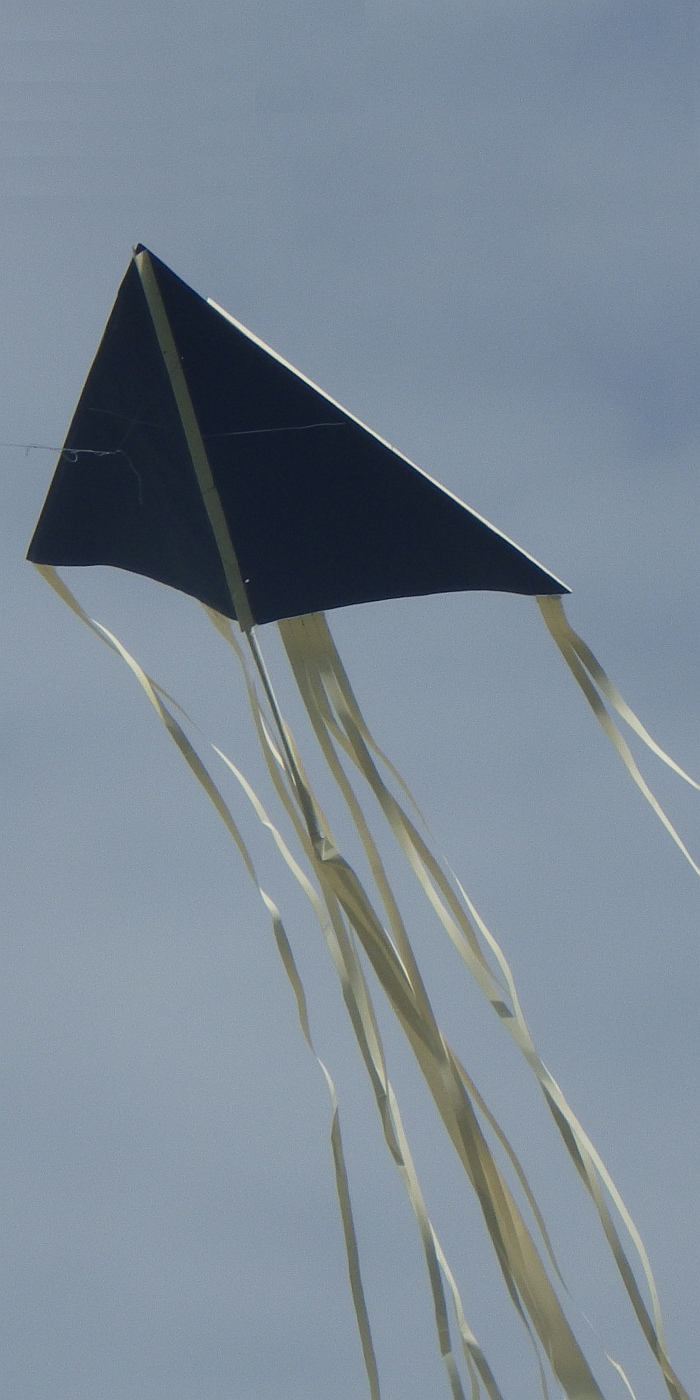 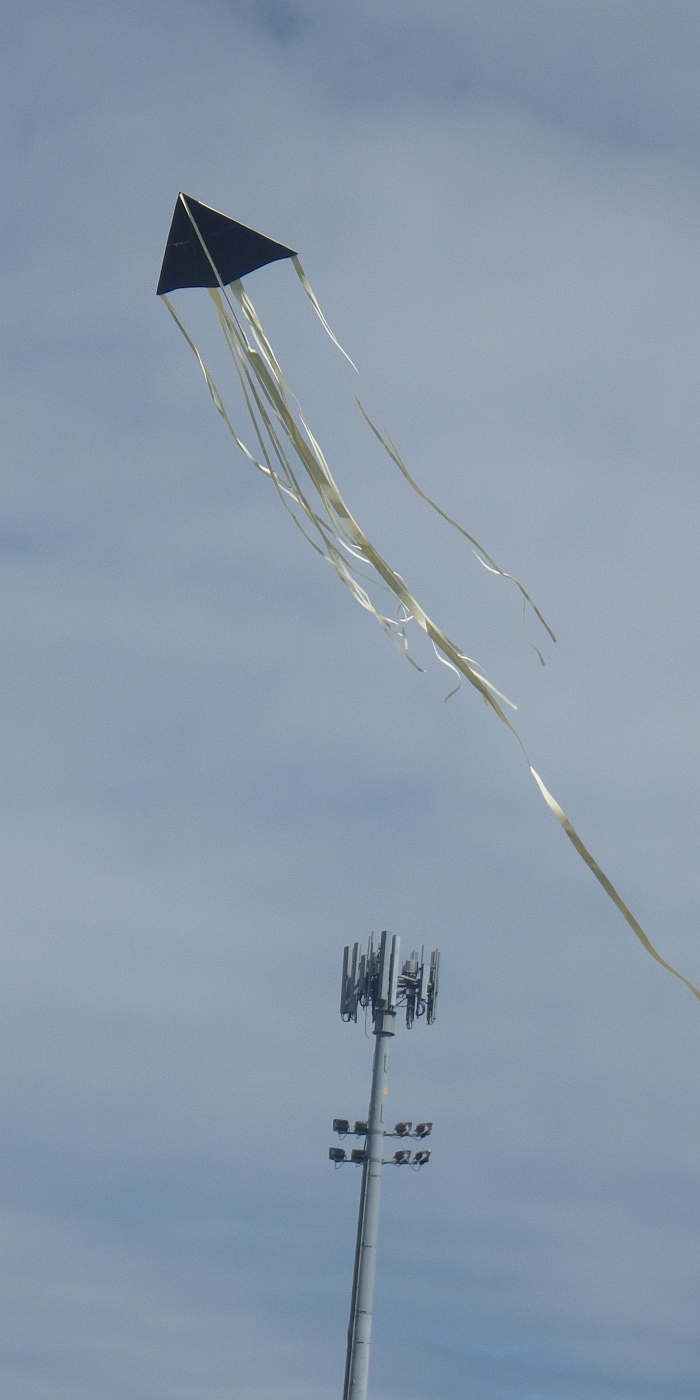 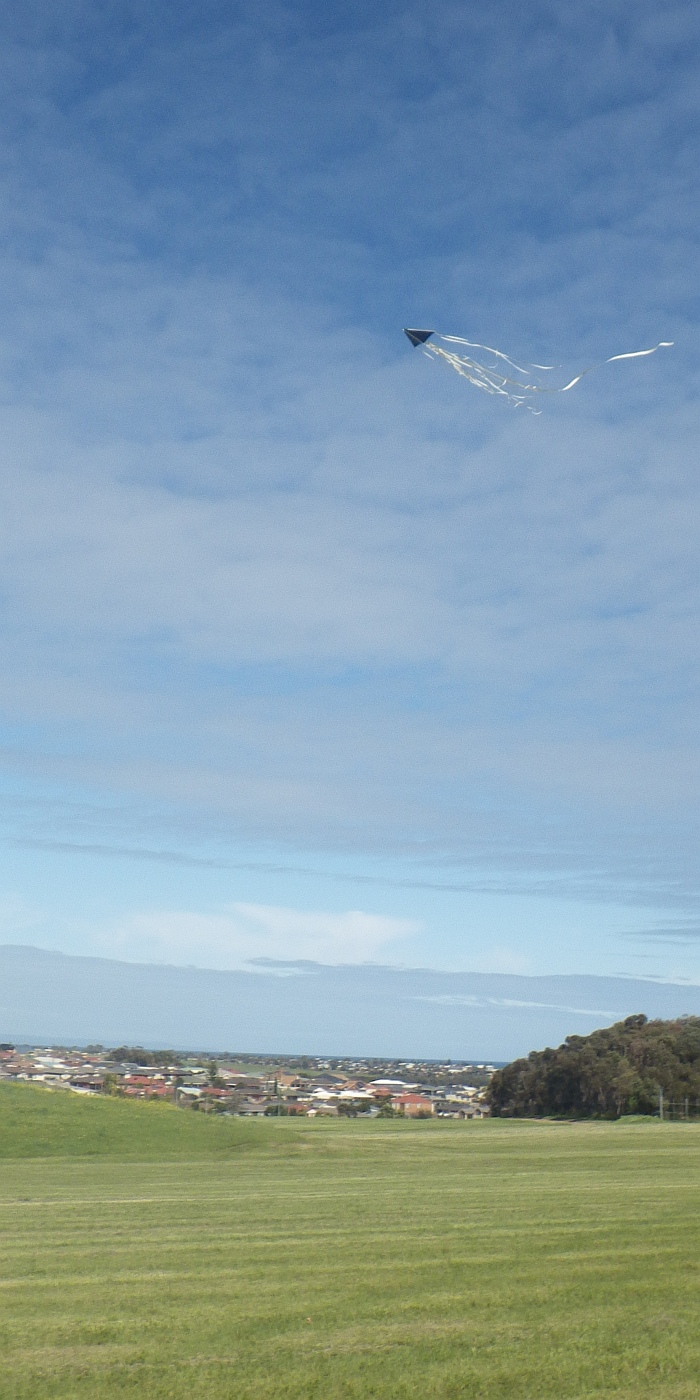 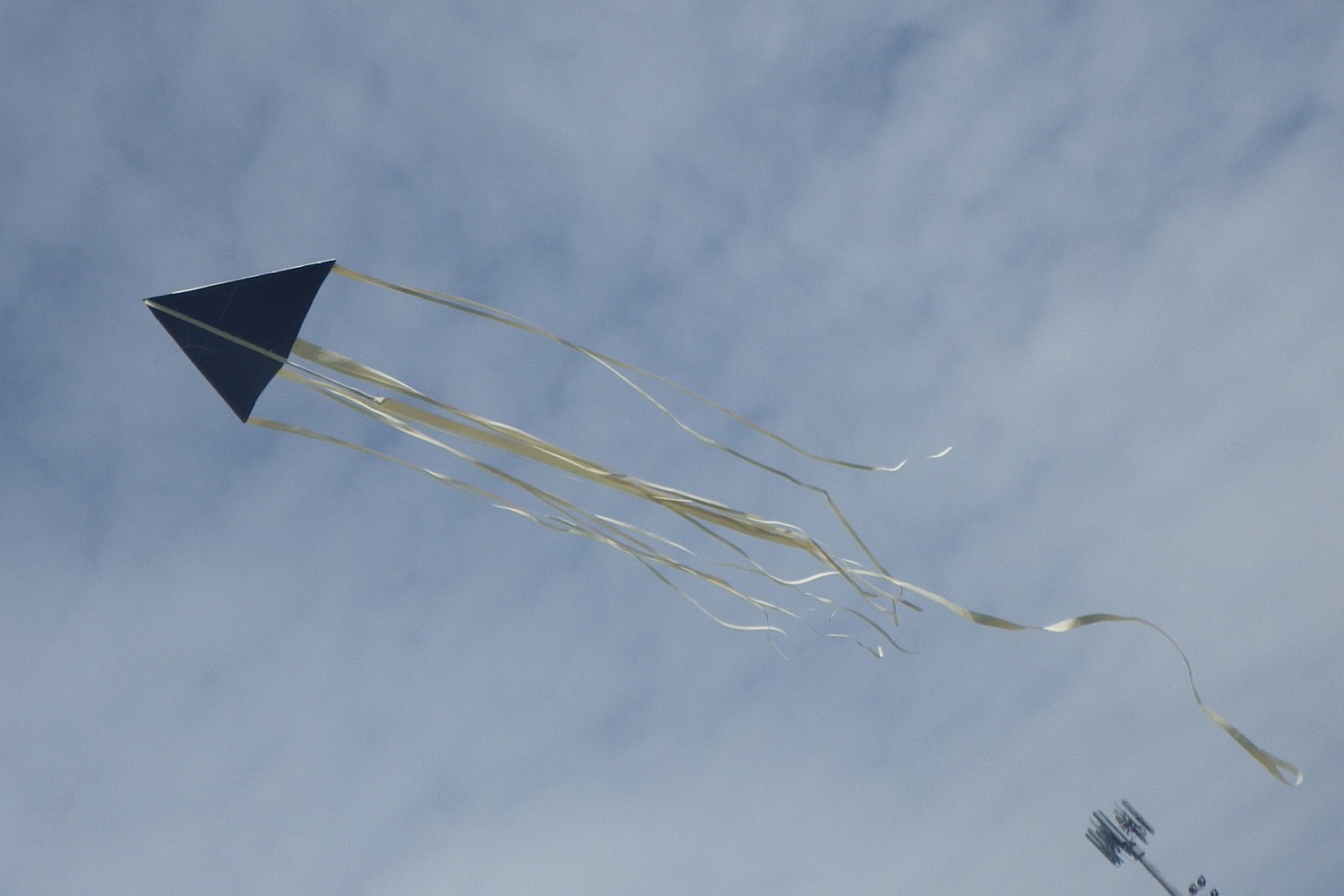 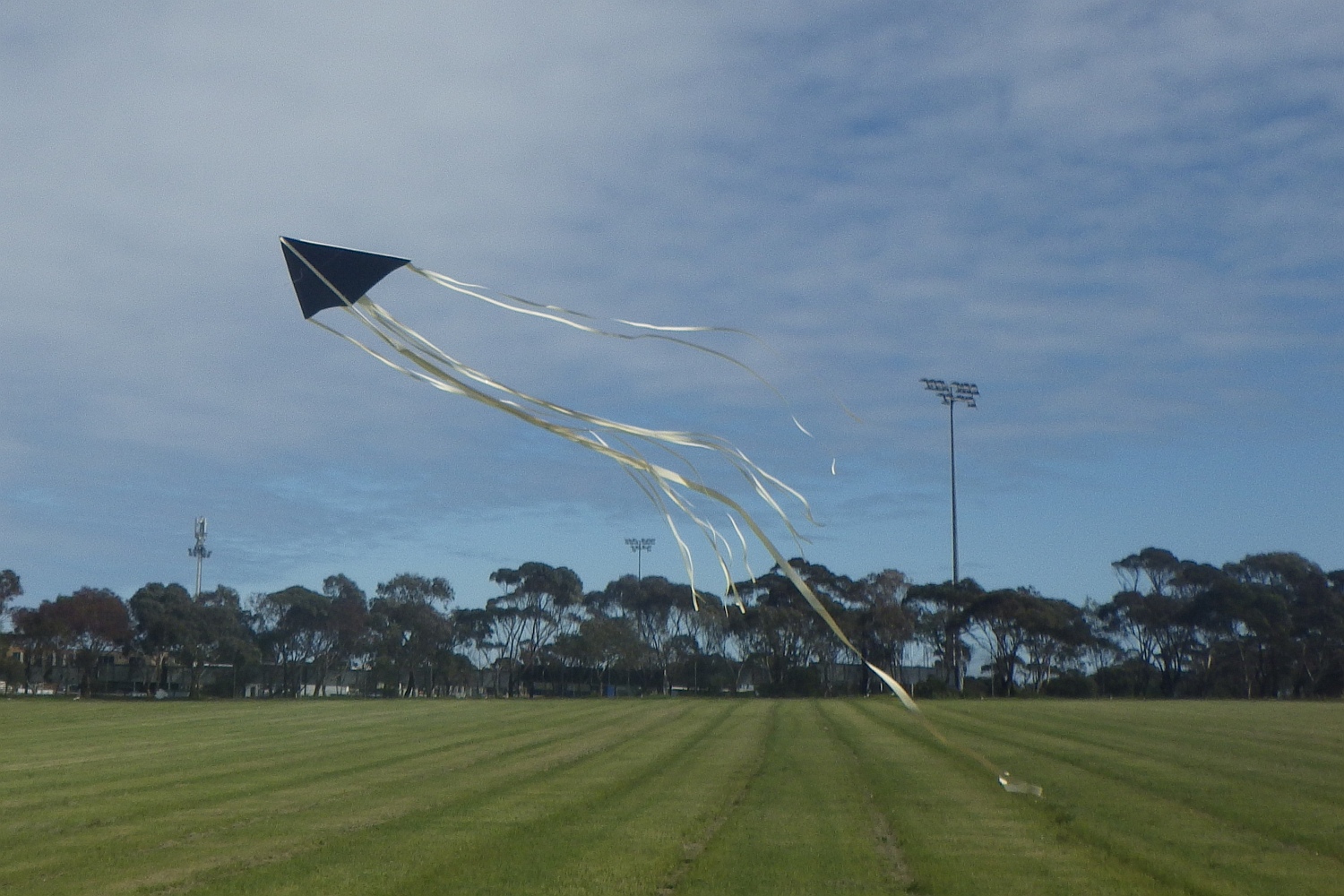 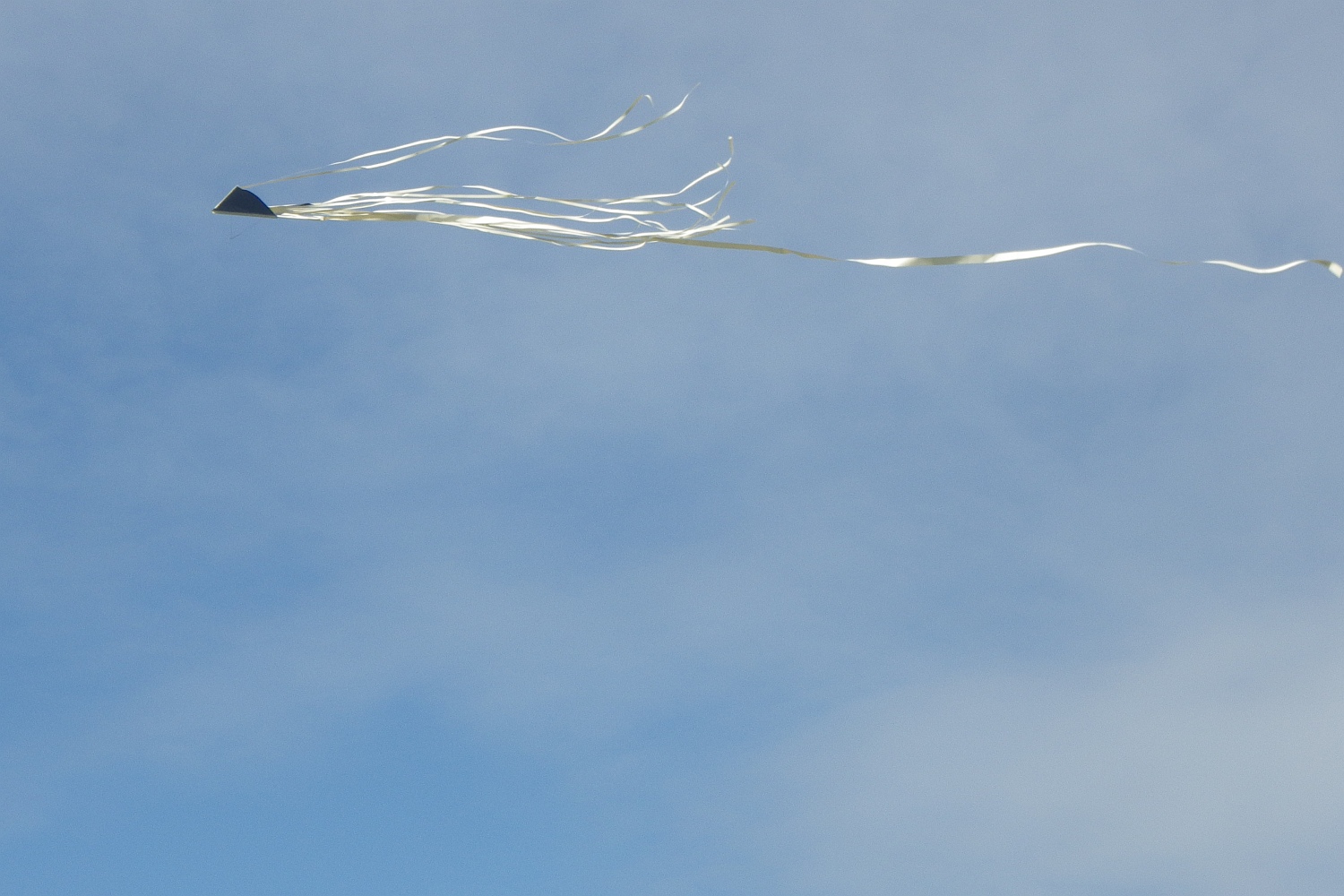