Boxed in at the Beach!

With the car parked conveniently right near the concrete steps, it took just a half minute to get down the embankment and onto the sand at Christies Beach. The octopus kite and several other soft designs were in a tool bag. 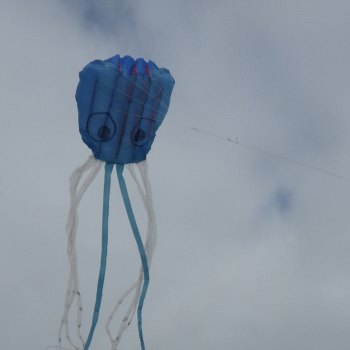 Before this, some moments had been spent atop the embankment at a railing—just viewing the rather high tide and the 1 meter (3 feet) waves crashing in.

There was not a lot of space between rocks and seawater, but it would be enough, thanks to the wind direction! The wind meter, at shoulder height for a full minute or two, was showing 14 kph gusting to 17 kph—not bad for the MBK Octopus kite, although it's quite comfortable over 20 kph.

Carefully removing the tails and tossing them downwind, I laid the heavy wooden winder along the leading edge of the flattened kite. The trick is not to get the tails entangled with the bridle lines!

Another half a minute was spent separating the tails. Better now than later.

Flying line attached, the blue inflatable octopus rose willingly on the 50-pound Dacron line and swirled about just meters from the sand. My bag containing other soft kites, winders, and assorted gear became the anchor point.

Meanwhile, the water's edge was not far away. But the bag was situated on a gentle slope of firm sand, so things were under control for the time being.

Plenty of photos were taken, from various angles. The sun's illumination was up and down as thin spots passed by in the gray layers of overcast.

On a little more line length, it was time for taking some video clips. There won't be any shortage of wave noise in these! It was pretty constant.

For a time, the breeze strength dropped out, down to an average of 12 kph and of course, lower than that in the lulls. This caused the octopus kite to go unstable. This was partly because the little drag plates at the bottom corners weren't dragging so much but possibly also due to underinflation and the resulting loss of shape.

With photography out of the way I had some fun shaking loops off the winder—just fast enough to keep the kite suspended above the sand, tail tips dragging. Thanks to the wind direction, it was possible to keep the kite floating out downwind all the way to 60 meters (200 feet) of line.

Upon gripping the line, the bug-eyed octopus kite obediently soared straight up to around 100 feet over the sand and waves.

Since the wind was somewhat softer than the kite really likes, there was considerable sag in the 50-pound line and the angle from my hand was only about 20 degrees. It would have been a better idea to use the 20 pound line! That doesn't sound much for a 5 meter (16 feet) long kite, but the MBK Octopus was pulling less than a kilogram (2 1/4 pounds) of tension into the line.

A flock of seagulls (not the 70s band!) flew past in a ragged V formation, heading upwind along the sand.

In the distance, downwind, a layer of spray looked like mist covering the surface of the sea near the sand. White water was washing everywhere. The dark colors of the cliffs and vegetation in the background heightened these effects.

Talking about the sea water, the water's edge now seemed to be lapping a bit closer than when I first arrived.

The breeze was better above 100 ft and kite was behaving itself so out went the line to 90 meters (300 feet).

After watching the kite and its streaming tails for a few minutes, I noticed other onlookers leaning against the embankment railing way downwind. It seemed safe to let out line to 120 meters (400 feet).

By now the MBK Octopus was drifting right over the sea spray. The kite was easing up and down between 250 and 300 feet altitude depending on gust strength. However, even at this height, the breeze would sometimes drop and leave the kite underinflated. Result: loops and giant S-bends in the sky, traced out by those long, long tentacles!

So, I decided to quit while I was ahead and started winding in. By the time the kite was on less than 30 meters (100 feet) of line, the angle had increased to a more familiar 45 degrees or so. Eventually, the octopus kite was down on the sand but threatening to inflate and take off again.

Packing up was easy, although it required some care to slowly get all the air squeezed out of the head and tails. Wet sand and periodic moving water was only a few meters away by now!

One final check with the wind meter revealed an average speed of 13 kph with gusts to 15 kph. This kite definitely likes a bit more, but at least the air was smooth and the kite found adequate breeze strength higher up—most of the time.

It was a pity about the lack of bright sunlight to add vibrancy to the photos and video. But some nice high flying was achieved anyway. With its long tails the MBK Octopus kite would have been visible for several kilometers around the suburb of Christies Beach. 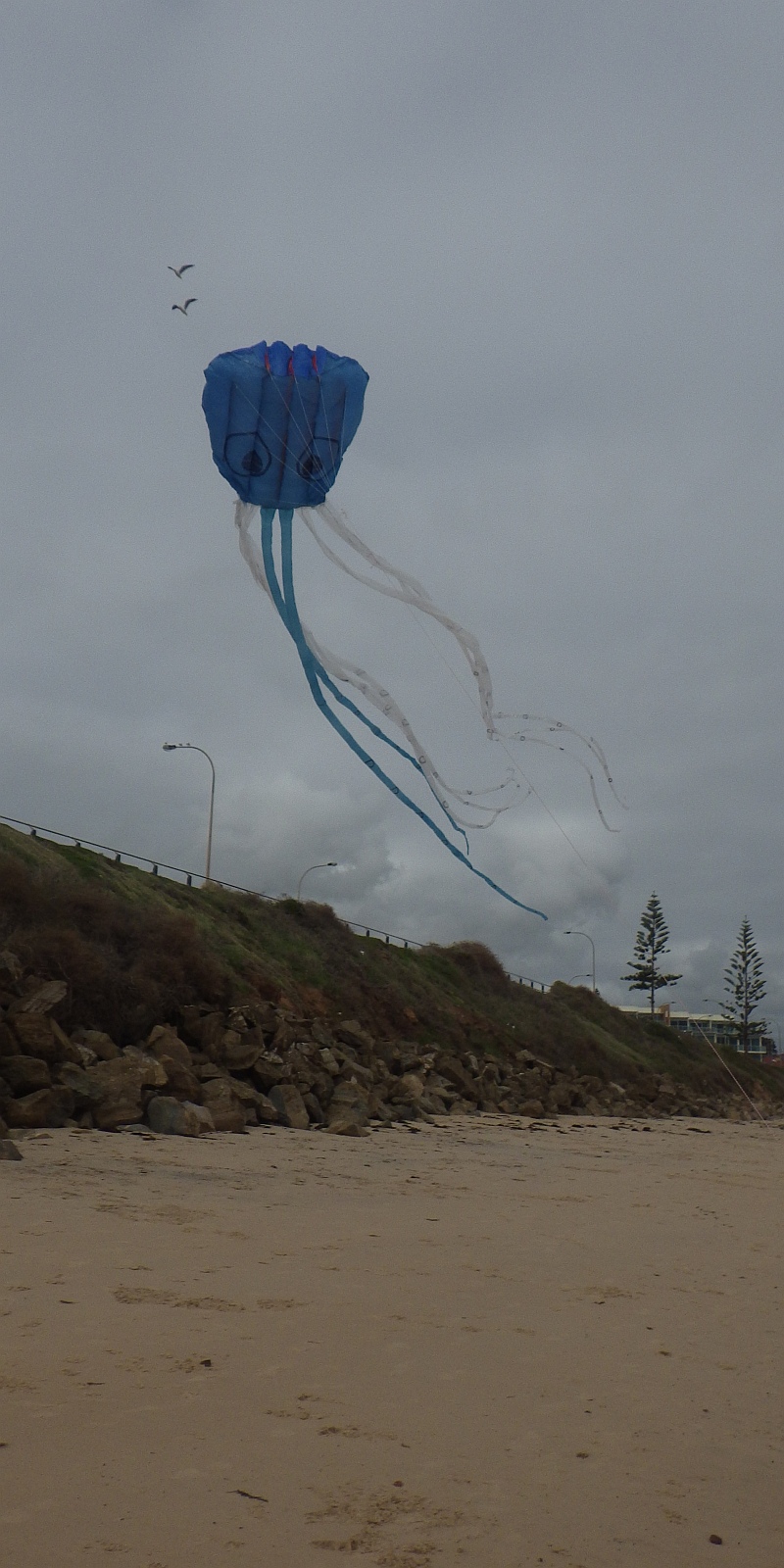 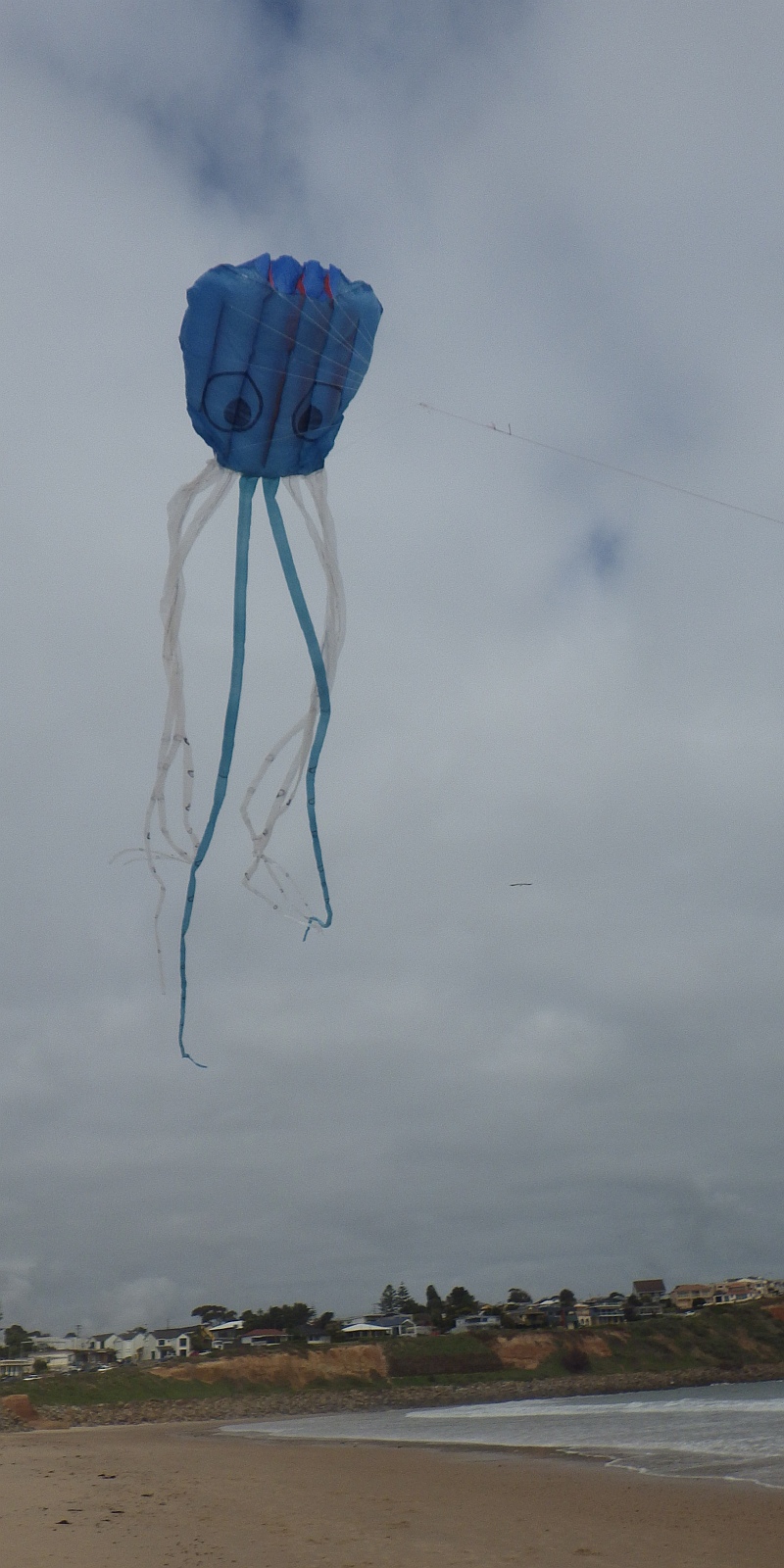 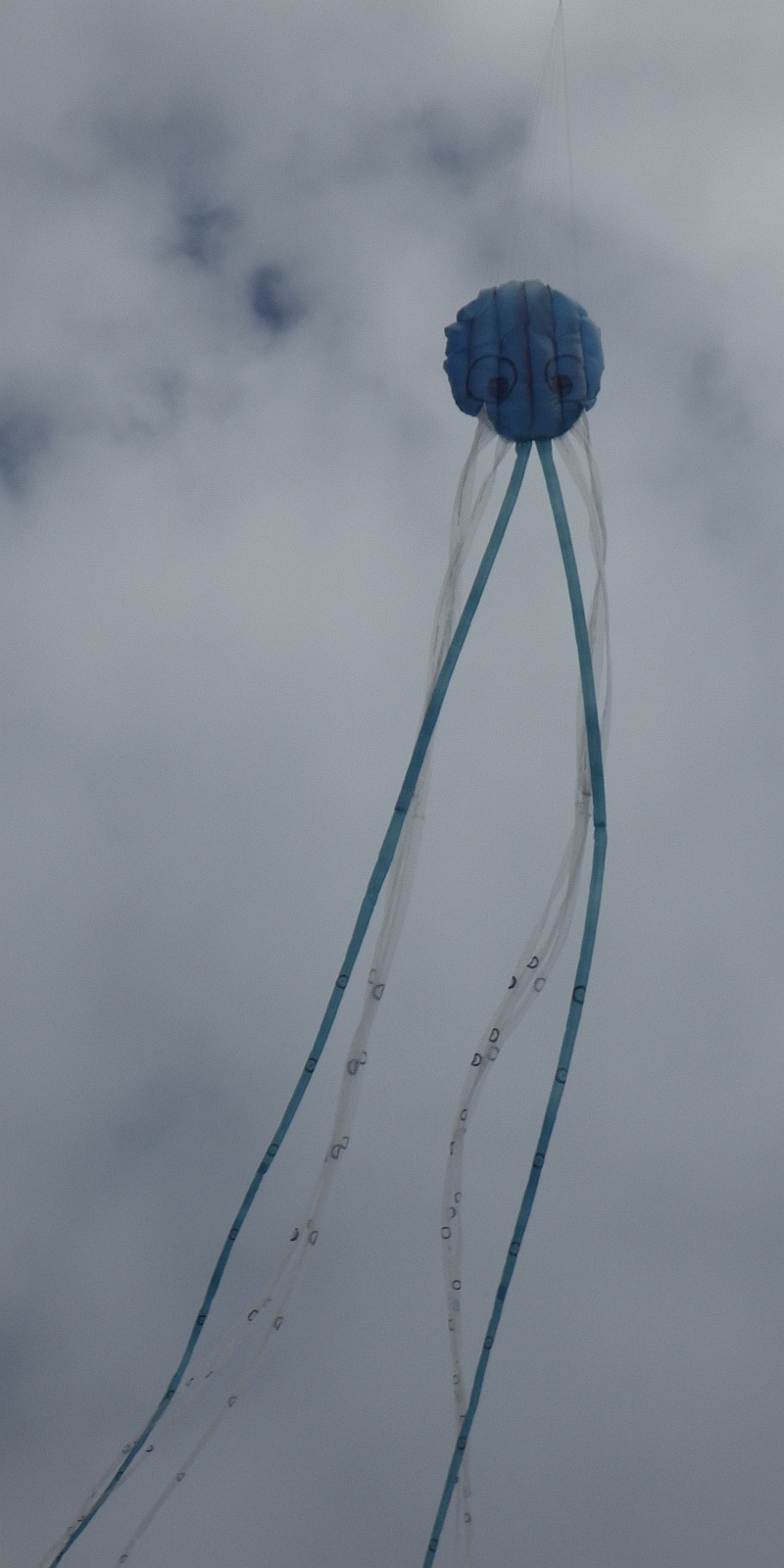 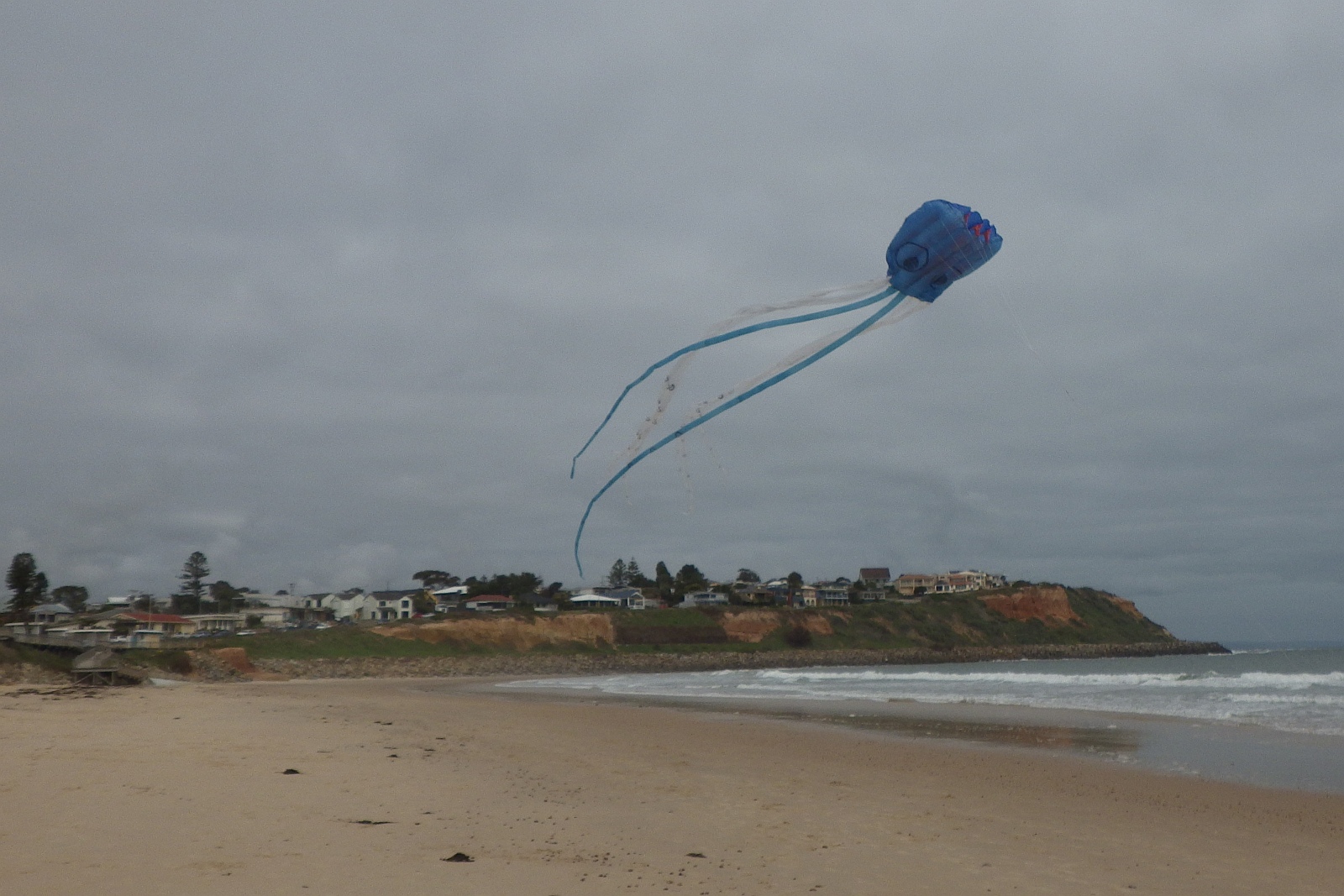 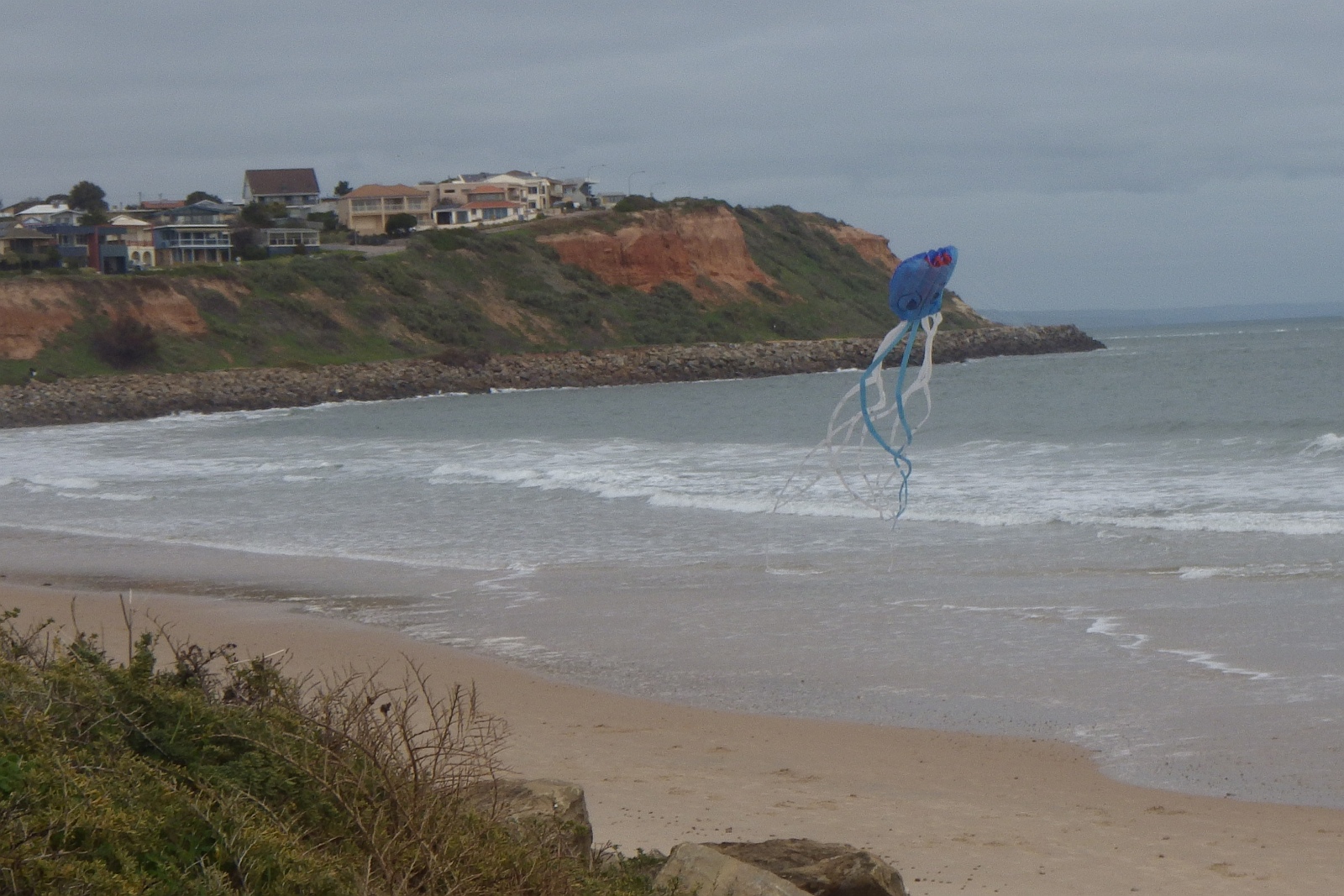 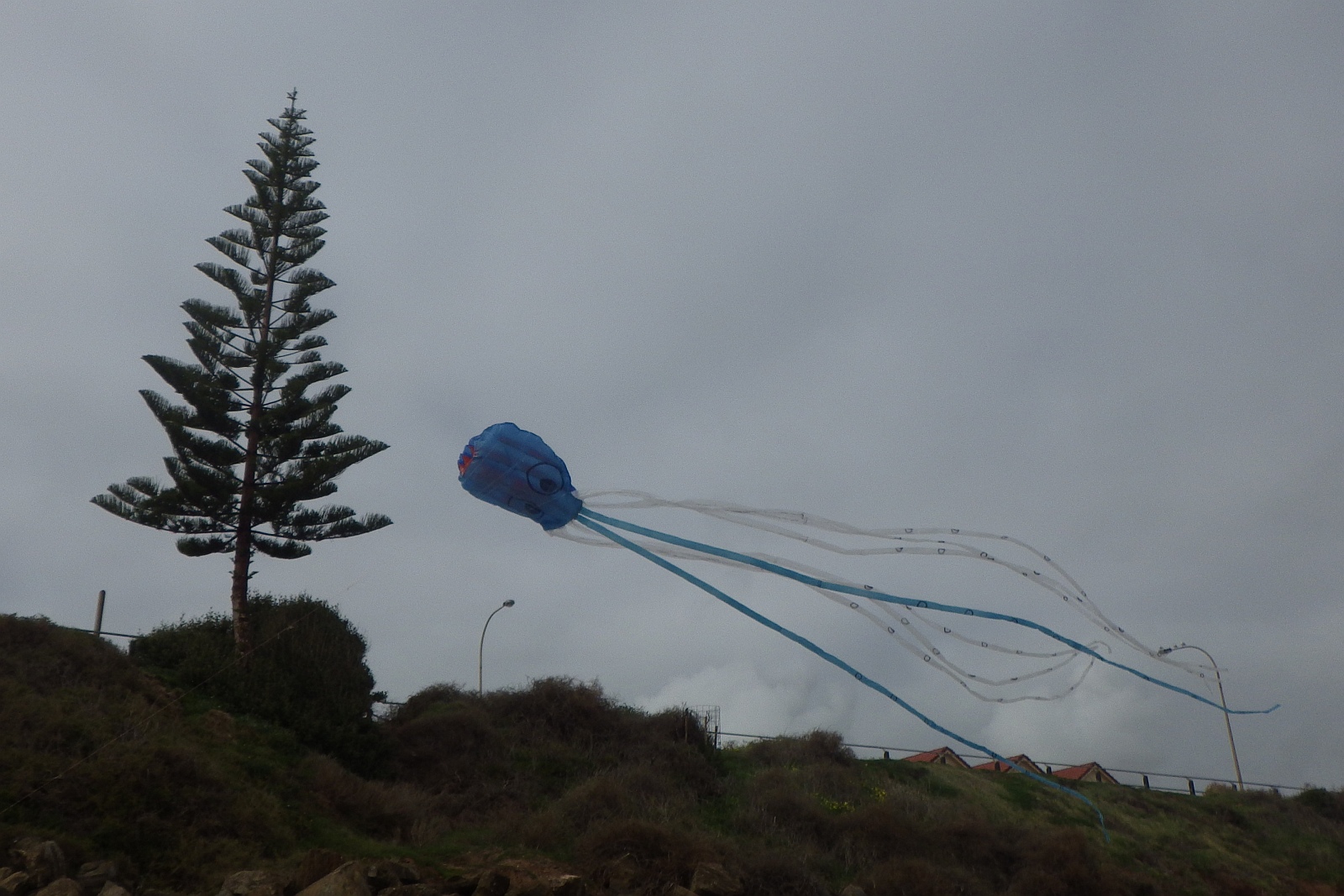 The video below was taken on another day, in sunnier weather.