There's so much to cover regarding the Niagara Kite Festival, I'll just have to summarize much of it in a series of lists.

This kite festival is really quite unique, and that has a lot to do with its geographical location. Not only does the festival overlook an enormous waterfall system, but it actually spans two countries, the USA and Canada!

The organizers for the 2007 event have their work cut out for them, contending with:

Whew, uniqueness sure comes at a price! Unlike most International kite festivals, this one doesn't have a long unbroken history of annual events. However, the 2006 kite festival went so well that the organizers have said they want to keep it happening year after year.

This next list tries to summarize almost everything that will take place over the four days the 2007 Niagara Kite Festival will run:

STOP PRESS: On visiting the gorgeously presented official website in June 2009, I found that this kite festival is no more! "Cancelled"—just like that, for ever. Oh well, it was good while it lasted.

The Niagara Kite Festival in Detail

The hundreds of flyers during the festival will include many who have registered themselves for the chance to fly their own kites off the Niagara escarpment. That's not an opportunity that comes up every day! The area available will be from the Rainbow Bridge to Terrapin Point on the USA side and Table Rock on the Canadian side. 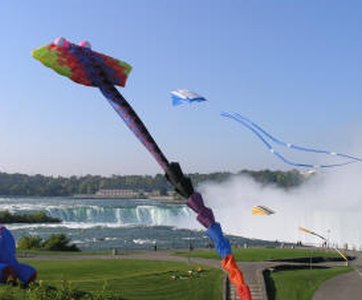 Kites near the falls

The range of kites flown, apart from the usual assortment of deltas and ram-air designs, will include the following:

On that last point, one of the world's biggest kites will be on display. Noted kite designer Peter Lynn has had these massive flexible kites made for three customers (at this writing). One of those customers is Masaaki Modegi of Tokyo, Japan, who has named his kite Mega Moon. Masaaki and his team are going to fly this Olympic-swimming-pool-sized kite at the Niagara Kite Festival 2007. All that material weighs about 200 kg (over 400 pounds)!

A kite arch is quite a spectacular structure in its own right. However, when it connects two countries during the Niagara Kite Festival, it will also be meant as a sign of peace and unity. The 2007 kite arch will, weather permitting, be flown by Iqbal Husain of Switzerland. This arch consists of many beautifully handcrafted diamond kites.

The historical re-enactment is based on the Homan Walsh kite contest which occurred in 1848. The authorities needed to build a suspension bridge across the Niagara gorge. In order to get a line across the water as a first step, they organized a kite-flying competition. A 15-year-old boy managed to be the first to drape a line across, at the narrowest part of the gorge. For his efforts, he won 10 dollars, which was a significant amount of money back then.

This time around, there will be a whole lot more people trying to land their kite on the far side of the gorge. In teams of three or more, some will be flying on the Canadian side, and some on US soil. For those who want to, it will be possible to fly from the location of the original contest!

We've mentioned the Mega Moon kite man from Japan. Here's a list of the countries of origin of other international guests that have registered for the Niagara Kite Festival of 2007...

In recent years, a whole range of land-based kite-powered extreme sports have gained in popularity. Just two of the kite-powered sports that will be on show at the Niagara Kite Festival are kite buggying and kite mountain boarding.

Plus some kite surfers seeing how far they can jump off the fastest-flowing section of the falls. Just kidding!

A range of exhibitions are planned. Topics include

See how kites can appeal to all personalities, from extreme dudes to the quieter types you might find checking out those exhibitions!

Loads of street entertainment will help to give a carnival atmosphere. For example:

Interested in making kites? If you want to try your hand at this, there will be a number of kite-making workshops.

The Niagara International Kite Festival has been described as "sporadic and spectacular." Why sporadic? Well, the first one was originally intended to be a one-off, and so several years passed before another similar event was organized.

A professional kite flyer and kite historian, Meg Albers, got the first festival ermm off the ground :-) in May, 1992. This event included a re-enactment of the Homan Walsh Kite Contest of 1848, which I've already mentioned further up this page. The re-enactment, which was successful I might add, even took place at the original site.

The weather was pretty bad apparently! That's it for 2005.

On this occasion, the festival was held over the Canadian Thanksgiving and Columbus Day weekend. That was four days in all, from the 6th to the 9th of October. Two different venues were used. Those were the brink of the Falls themselves plus the escarpment, and the Reservoir State Park.

This festival went very well and generated considerable public demand for more of the same in years to come!

At the original writing of this page, this hadn't come around yet, but the organizers were doing their best to ensure it was just as big and successful as the 2006 event was. The planned venues were going to be the same. At this point it seemed that the Niagara Kite Festival would be an annual event for a long time!

Who were the organizers? The Niagara Tourism Convention Corporation and an organization called Sky’s the Limit.