On its last outing, the huge Multi-Dowel Delta kite showed some benefits from having a little more sail billow added. This time, it was going to fly with a shortened tail. This was mainly to shift the balance point forward a little, but the kite also turned out to look quite a bit better in the air! 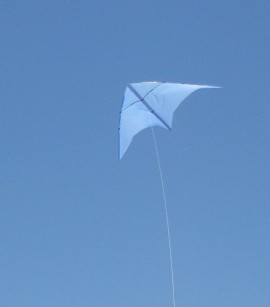 Another minor mod was to add packing tape on the underside of the leading edges, from the nose back past the upper tips of the leading-edge dowels. Plus, a short length of packing tape was wrapped around just under the dowel tips. All this was designed to strengthen a couple of weak spots. These highly stressed points showed up after only a couple of short outings.

Setting up under a shady tree, it turned out to be sheltering a small flock of galahs. As they left, something fell and hit me on the shoulder. I didn't think anything of it until my wife later pointed out that I had been hit by the rear gunner of a departing galah. Yeah, bird poop.

The morning had warmed up to about 30 degrees C and, despite my confidence, the big delta just didn't want to stay up. Occasionally, the breeze even wafted past in the opposite direction! Thermals were about and the only hope of getting up high was to launch into one. At other times, the breeze was essentially zero.

The vertical spar drum worked a bit loose, but this time I managed to fix it before the spar became completely disconnected. A little trick with two pieces of electrical tape ensured that the drum could not slip back in flight, and yet the tapes were easy to remove after flying.

One or two awkward wing-tip landings proved the worth of the extra tape near the nose. No damage was done to the sail whatsoever.

Finally, a long tow made it possible to climb the Multi-Dowel Delta kite really high. While fiddling about down low, Aren had fun trying to stay inside the shadow, as you can see in the photo further down.

During the short flights previously, the more forward center of gravity was helping the kite to fly more smoothly. There were no more sudden tail drops, followed by overflexing when the air pressure came back on. The extra tape around the nose area was also helping a tiny bit with the balance. In fact, the kite was handling a lot like its smaller and very well tested cousin, the MBK Dowel Delta.

Being a delta, very high line angles happened occasionally. As the kite approached vertical, it lined right up with the midday sun. For a few moments it was not possible to actually see the kite. Never mind, it had proved itself to be fairly predictable up to this point. 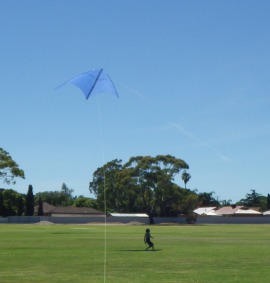 This must be the lightest-pulling Multi-Dowel kite designed so far. Although I didn't actually get out the spring scales out today, the line tension only felt like a kilo or three most of the time. Perhaps it would have popped up to around 5 kg or more during the strongest updrafts.

During one of these updraft episodes the kite decided to keep flying upwind—way past vertical! Thankfully, the pressure soon eased and the prevailing breeze up there slid the kite back downwind again, tail first.

I gave 7-year-old Aren the line for a few moments sometime after this. There's not too many 4.8 m (16 ft.) kites you can do that with! Although I wouldn't recommend it for beginners, the kite seemed quite safe to fly without a glove on. These were "very light" conditions.

It was drawing close to the time that we had to leave, and it was an absolute pleasure to see the large dark-blue delta parked up there at around 300 feet above the grass. Finally, I walked out toward the kite, bringing down the line.

Below 100 feet the air became rougher, and a pause was necessary from time to time. With 15 meters (50 feet) to go, I noticed dozens of very fine cobwebs attached to the line, streaming downwind. Australia is a land of numerous spiders and insects and it seems you can't get away from them even at 300 feet! The tiny spiders must have been caught up in the rising warm air of a thermal and jettisoned their lines when they realized they were stuck.

It was also obvious that one end of the spreader had pulled through the shoelace tie at one end, by several centimeters (2–3 in.)—when under plenty of pressure I imagine. So, it wasn't just smooth air up there that made the Multi-Dowel Delta kite fly so serenely. Here come yet another set of notches in the spreader! The existing ones might be reserved for just the smoothest wind conditions, for a bit of extra performance.

During all this, the wind meter parked near the ground had registered a 4 kph average, gusting up to 16 kph approximately. It's possible the kite experienced brief periods in the mid-20s, at which point the sail would have got quite noisy and rippled a lot.