Rough as Guts Up There!

The air that is—not the Multi Dowel Barn Door kite, which performed admirably! Earlier in the morning, the air had seemed very light round the house and yard, so that ruled out taking the new and untested Multi-Dowel Box kite. So the Multi-Dowel Rokkaku and the Multi-Dowel Barn Door were piled in the back of the car, to cater for all winds up to 30 kph. And this was just as well, as it turned out. 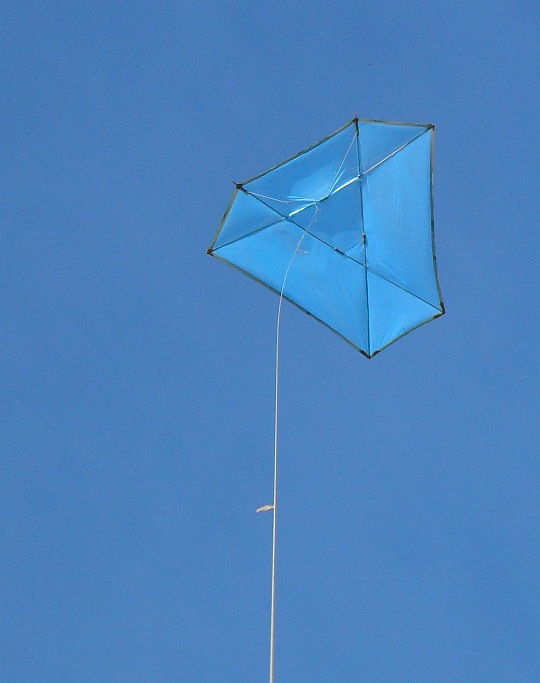 The big blue barn door hadn't been rigged for quite a while. Hence I managed to get the upper diagonal spar notches pointing the wrong way as I did up the sail ties. It was decided to leave things as they were, as a test. Others will surely make the same small mistake at times, and it really should make no difference. And, fortunately, it didn't.

Soon, the huge kite had popped up on several meters of line, weaving back and forth in the chaotic low-level breeze. After a relatively smooth climb out to 30 meters (100 feet) of line, I went back and hand flew for a while—with no gloves, but it was OK.

Despite having one hand occupied with the flying line it was still possible to use both hands, to a degree, to fiddle with the camera and take a few shots on about 2x zoom. It was a pity about the boring blue sky background, but that's just the way it is sometimes!

The air was very gusty, with the barn door soaring up very high from time to time in small patches of rising air. Mostly, the line was pulled fairly tight at 50 degrees from horizontal.

Due to the wind direction, I had ended up quite close to a sign pole at the edge of the reserve. Despite the shiny smooth surface it was straightforward to pull a huge loop of slack into the line and then put five wraps around the pole. A wooden winder was then passed across the line near the ground, to prevent line unwinding from beneath the tether point.

See the photo of the line tethering, further down. It also shows the hose reel holding the line, conveniently secured by being dropped over a short post.

It was time to just relax a bit, so I found a comfortable spot on a large log that for some reason has been left here. It seems a permanent fixture, since it's been here since the earliest days of my flying from this site. It adds a bit of nature to complement the nearby grove of trees and walking trails I suppose.

Watching, watching. And enjoying—it's every kite-maker's reward for getting the design right :-)

It was tempting to let line out to 90 meters (300 feet), but the wind direction was taking the Multi Dowel Barn Door kite close to trees and power lines, so it was not such a great idea. "Better safe than sorry" applies really well to single-line kite flying! You just never know.

Since there was a little time to kill, I pulled out the spring scales and measured the line tension for a few minutes. Flying conditions were reasonably comfortable for the big stable barn door kite as it pulled between 3 and 5.5 kilograms. Even so, the kite was making good use of its inherent stability, when sudden lulls would leave it lurching way over to one side or the other. It wasn't the kite's fault at all, since uneven air pressure was hitting the sail from moment to moment. 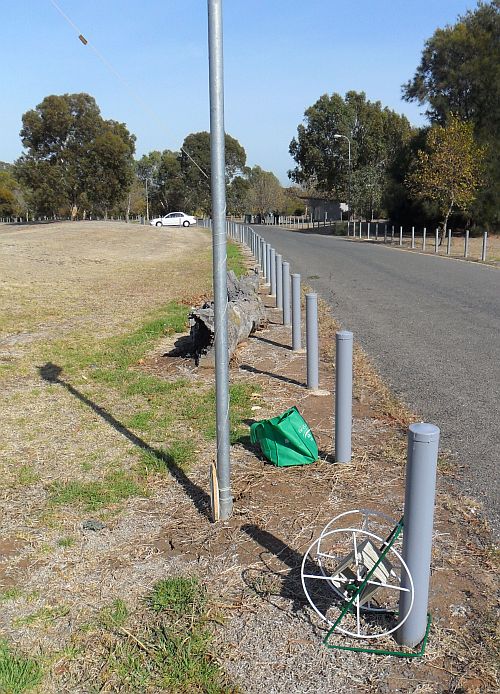 Anchored to a sign-post

After some more sitting and watching, it became clear that the wind was picking up further. The kite's antics became more extreme, but it clung on and never went into a loop. The 200-pound Dacron line was sagging and tightening, swaying, and twitching constantly. By the way, if you want to make one of my Multi-Dowel designs, this one will probably give you the greatest peace of mind in really rough air!

Finally, after seeing the plastic sail curve markedly at the edges under the pressure of a sudden gust, I whipped out the spring scales again. Confirmation followed ... line tension was all over the place, from just 1 kg up to great tugs of 7 or 8 kg!

Wondering if it was wise to let the kite continue under such punishing loads, I started to walk it down. You know, the old trick of walking out towards the kite while running the line through one hand. Things got interesting on the way down as savage gusts continued to buffet the huge barn door.

At one point it was headed vertically towards the ground, at well under 100 feet of altitude. This was a bit of a worry, since the line was still secured round the pole! No emergency letting-out would be possible, in other words.

However, to my relief, the big kite righted itself quite suddenly, only meters off the grass. Whew! At last it was down, and I realized the decision to stay at 60 meters line length was definitely the right one. The downwind line of trees was not far away at all.

Grabbing the upper bridle lines, it was an easy matter to fly the Multi Dowel Barn Door kite down the last couple of meters to a soft and even trailing-edge landing on the dry grass and weeds.

A was nice day to fly really, in terms of sunshine and air temperature. But it was so very wild and woolly up there! The Multi-Dowel Sled or Rokkaku, as strictly light-wind kites, would not have coped.

Today, near ground level, the wind-speed readings were a 7.3 kph average and a maximum gust to 23 kph. Higher up, it was easily gusting into the high 20s and turbulent. Around 9 am today, according to a nearby weather station, winds were averaging just 1 kph and gusting to 4 kph. It had certainly picked up after that, between 10 am and 11 am at the reserve.

Sometimes I read about locations in other countries that have very smooth and constant breezes day after day, and just wonder.