The new Minimum Sled Kite instructions had just been written up. However, I couldn't post them on the Web until the thing actually flew, could I! An inflight photo and a flying video were required before the page would be complete, anyway. 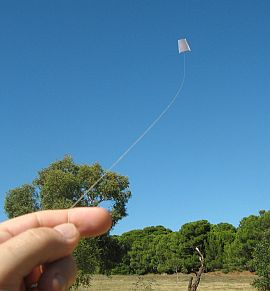 Flying in the barest breeze

So, out I went. A grown man with digital camera, wind meter, and broad-brimmed hat—all for a small plain kite made from a single sheet of A4 copier paper! It's called commitment to providing good original online content :-)

Arriving at the nearby school reserve, a quick check for herds of schoolboys or flocks of schoolgirls was in order.

Nope. The coast was clear, so out came the Minimum Sled Kite and other gear.

Rather than venture out onto the main oval, which was still weed-infested, I stayed in a small grassy clearing not far from the road.

Despite a few surrounding gum trees, a promising light breeze wafted through from time to time. Sure enough, the gentle gusts were enough to loft the kite for up to half a minute at a time.

The picture on this page was taken during these short flights.

The little sled, thankfully, flew stable most of the time. Occasionally it would flick itself inside out when a spot of rough air came through! But at least, when a constant flow of air was there, the kite flew like any other small sled. Line angles were modest, but you can't expect too much from a single piece of copier paper! I was actually very pleased with the way it flew.

Then followed a quiet period where the average wind speed dropped to around 1.3 kph (less than 1 mph). So there I was, standing out in the sun, holding a piece of line in my hand and checking out the treetops for signs of approaching gusts. This would have been a slightly odd sight for anyone walking past I guess, or the guy working on the school fence, not too far away.

Just as I was considering posting about five seconds of usable video and a grainy inflight photo of the kite, there was a rustling of leaves. Yahoo! (The exclamation, not the search engine.)

Within seconds, the Minimum Sled kite was up and away. I let quite a few meters of line slip through my hand, before extracting the camera from a pocket.

No sooner than the movie taking started, the kite flew right up into the sun.

Fortunately, the little sled soon slid out of the way of the sun and went on to flying very nicely for the better part of a minute. It sank to just a meter (3 feet) off the ground during a slight lull, then moved back up, zipping back and forth as the gust strength increased. Then there was a nice high climb to perhaps a 50 degree angle, before some graceful hovering and sinking slowly back to the grass.

Great! It was all "in the can" as they say in the movie business.