In the "mini-sled kites" category, probably only our 1-Skewer Sled really belongs. That's because its spars are ordinary BBQ skewers. We find the 12 cm (12 in.) variety work well.

Next up in size comes the 2-Skewer Sled, which to some people still appears rather small. Even mini perhaps? When I first designed it, after only flying 1-skewer kites for quite a while, two skewers tall seemed a decent size!

One day, while out flying it with my young son, a lady remarked to her child "Look at that little kite!" I was almost offended. Looking back, it's a bit of a laugh!

Later, I started making larger kites like the Dowel Sled. In smooth air, it will soar right up over 300 feet. And it holds a good angle too! Finally, the huge Multi-Dowel Sled came to be, which had twice the span of the Dowel version. This huge but simple kite was often used to lift a camera rig into the air for aerial photography.

And I didn't stop there. The Paper Sled featuring all-paper construction is small enough to fly on polyester thread. That's definitely a mini sled kite! 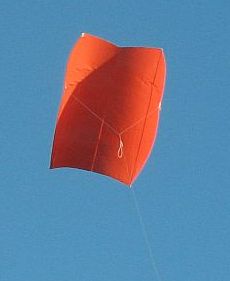 From here on is a photo or two of each MBK Sled. The end result illustrated, in case you decide to use our instructions to make one of these kites.

A lot of people have shied away from making my Skewer Series kites due to their complexity and need for gluing. Hence I did a small series of ultra basic kites, including this Simple Sled.

The spars are about 1 meter (nearly 3 1/2 feet) long—and no gluing involved! In light winds, it can be flown on 20-pound line, but we usually use 50-pound line just to be safe.

This sled does not require tails, which does help to keep things simple. 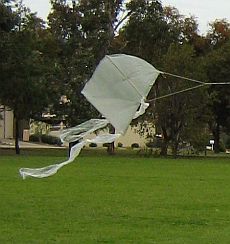 The original was made from clear freezer-bag plastic, which made it almost impossible to see against a gray sky. It was a good little flyer though!

We made quite a number of these mini-sled kites over a period of several months. We fly this one on 50 meters (150 feet) of 20-pound line. It doesn't need that strength, but we also fly our 2-Skewer Series kites on the same line. 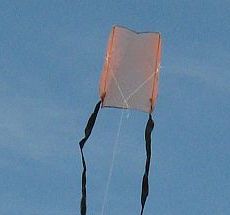 Here's the latest version of the 1-Skewer Sled, in MBK Orange of course ;-) This one can get off the ground in a light breeze, but really loves moderate breezes.

I've had reports of Cub Scouts and similar groups having a lot of success with this little design. It's certainly quick to put together. And it's reliable in the air, so long as the bridle lines are equal in length.

See this kite flying in lighter winds, in the video below: 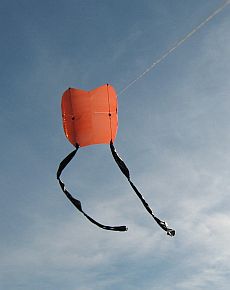 The 2-Skewer Sled is, as the name suggests, exactly twice as tall as the 1-Skewer design. Each spar is two skewers joined end-to-end. This gives it four times the sail area with not much more than double the weight. Hence, it's pretty good in light winds.

The original kite pictured had two-ply plastic which made it a little heavier, but it was still a great performer. In fact, homemade sleds can have problems staying open if the sail material is too light and flimsy.

In moderate winds, the 20-pound line was pulled quite tight, and even started to buzz when the wind strength picked up even further! The kite was also happy to loll about lazily in quite light wind-conditions. 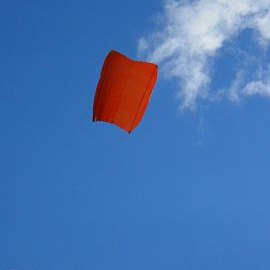 Some years later I decided to redo the 2-Skewer Sled. With slightly different proportions and the spars angled in a little towards the lower end, the new kite did not require tails to fly stable. It also flew at a higher angle than the old design.

However, the new sled would accelerate so rapidly in gusts sometimes, that the leading edge would fold under causing the kite to snap shut! On the positive side, if this ever happened, the kite would soon recover and pop open again - seconds later.

Down below is a video showing the latest 2-Skewer Sled design. It does fine without tails as you can see. Of course, even if tails are optional, you might still want them just for looks! 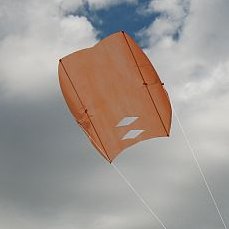 The Dowel Sled was designed from the start to be tailless. Those diamond-shaped cutouts create a little extra drag near the tail end of the kite to help keep it stable. That was the initial idea, but it turns out they don't make much difference.

The Dowel Sled is rather sensitive to rough air but will fly at extremely high line angles in conditions that suit it.

Size? It's about twice as tall as the 2-Skewer Sled, so that's about four times the sail area. Compared to the 1-Skewer Sled, the Dowel Sled has about 16 times as much sail area!

There it is in the video below: 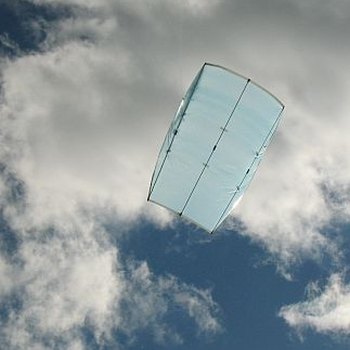 The big Daddy of MBK Sleds, the Multi-Dowel Sled proved to be the hardest-pulling kite of all my designs :-)  As such, I occasionally have referred to this kite as ... The Horse.

In light winds, the generous amount of line tension is a bonus when doing kite aerial photography. Lifting the rig plus camera is effortless!

Once, when the kite got caught up in a large thermal, it went straight overhead and pulled around 15 kilograms (33 pounds) of tension into the 200-pound Dacron line, during a gust! You see, I had the line hooked up to a set of spring scales at the time.

At other times, this kite has simply been fun to fly in very light-wind conditions when some of my other large kites would have struggled.

In the video below, see the huge sled moving around in light-to-gentle wind strengths on a fairly short line:

Sled-kite stories of my real-life flying experiences are worth checking out!

We once took all three sleds down to the beach and put them up in the moderate sea breeze that was blowing in from the southwest.

Even managed to get a photo, with all three in view!

That's about it for this page on mini-sled kites. Some were more mini than others!