How to Make a Sode Kite

This set of instructions on how to make a sode kite assumes you know absolutely nothing about kite making. You might already have some of the simple tools and materials required. 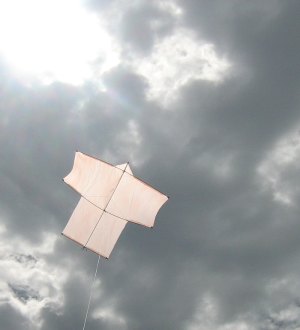 Anything you don't have is easily bought. If not exactly what I used, then at least something pretty similar!

The Dowel Sode is a large tailless design based on the traditional Japanese kite. Like the other Japanese design in this series, the rokkaku, this kite is a light-to-moderate-wind flyer. However, it can take a little more wind strength than the rok.

The sode scoots around the sky in very gusty moderate winds. In smoother and lighter winds, it is a very efficient and steady flier.

Setting up on the flying field is just a matter of attaching the bow line toggles to put some curvature into both the horizontal spars. Also, the upper bow-line is connected to the nose of the kite and the lower bow line connects to the tail. Thus, the horizontal spars are tensioned away from each other.

Then, when the flying line is attached to the bridle, you are ready to launch! The method of attachment is illustrated further down this page.

I have chosen to make "One Dowel Length" equal to 120 cm for every kite in the Dowel Series. If you are in North America, 48 in. of 3/16 in. dowel is close enough to 120 cm of 5 mm dowel. This will result in a kite with similar flying characteristics to my original. Make sure to find a hardwood type for your dowel.

How to Make a Sode Kite
Sail

Now's the time to read up on the kite making tools and materials required for making a Dowel Sode, if you haven't already.

The template shown above represents one side of the kite sail. You will now transfer these measurements to the sail plastic. 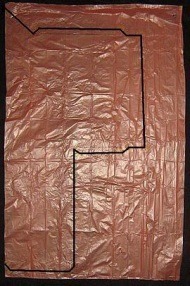 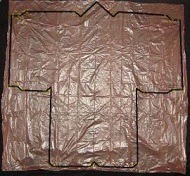 When doing the following, most of the width of the tape should be inside the kite's outline. Use a single length of tape for each line. Hold it out straight, touch it down to the plastic at one end, then at the other end, dab it down in the middle, then press down all along its length. 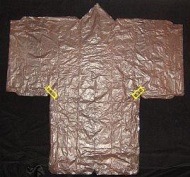