Any Loop knot can be used for forming a Lark's Head at the end of a flying line. Even the Simple Loop is quite strong in this application.

There are also several uses for forming loops midway along a line, and these are illustrated in the step-by-step photos below. 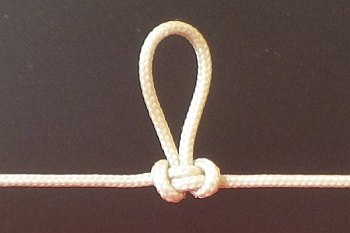 Butterfly—the best, if you can tie it!

Instead of going to the end of the line before forming the knot, you can put one in at any point along the line. It doesn't matter if both ends are connected to anything else, as long as you can pull some slack into the line.

Here are a couple of uses for this knot:

What other uses can you think of, for a mid-line Loop knot? 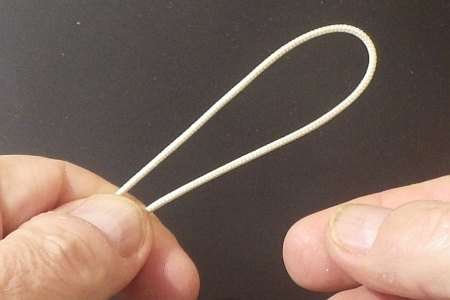 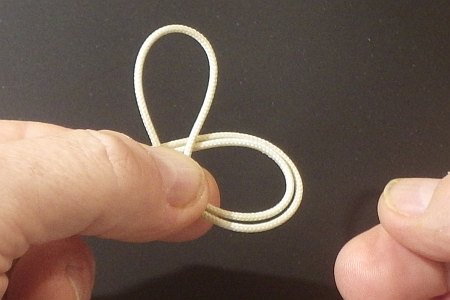 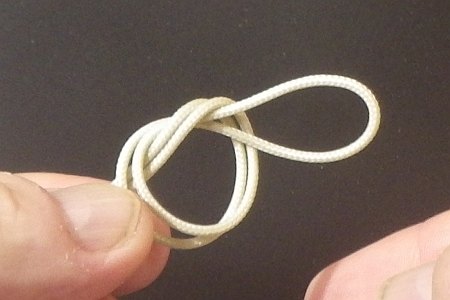 3. Around the back and through 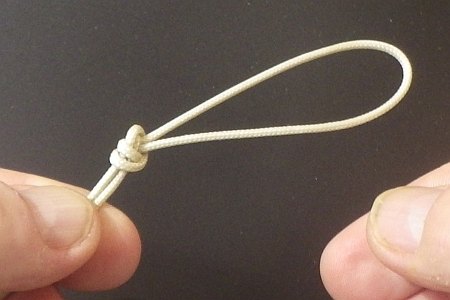 Now, a simple loop in the middle of a flying line is fine for small kites, where the line usually has ample strength. However, for much bigger kites, it's a good idea not to weaken the line unnecessarily. In particular, there are three knots which offer greater mid-line strength than the simple Loop: the Double Loop, the Figure Eight Loop, and the Butterfly Loop knots.

Here are some other uses for this knot:

If you're in the habit of using a Truckie's knot to pull some bow into a spar, then of course, that uses the Loop knot as well. There's no need for anything fancier.

The Dowel Sode uses two long loops of flying line to tension the bowed horizontal spars away from each other. The Simple Loop is adequately strong in this situation too. 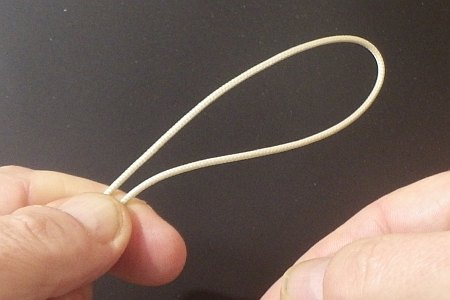 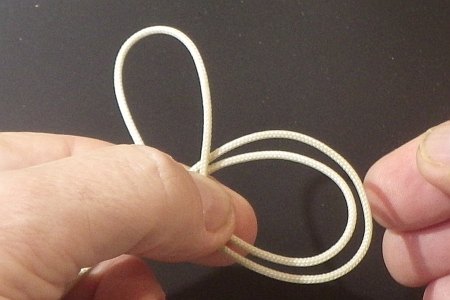 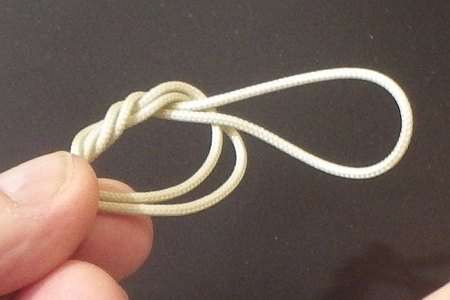 3. Around back and through - twice 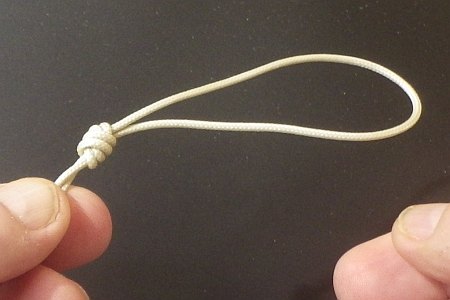 The Double Loop is about 5% stronger than the Simple Loop when tied midway along a line. That is, it does not weaken the breaking strain of the line as much. However, it's almost as easy to tie as the Simple version. Just wrap the loop around twice instead of once. That's it. Use this knot on the end of your flying line, so it can be attached to a kite bridle with a Lark's Head.

This knot is also worth remembering whenever you want to tie a large knot that will not pull through another knot—for example, near the towing point of a keel. Or perhaps you want to make completely sure a Slip Knot doesn't slip undone! In both those cases, the Double Loop looks neatest when the loop is tied as small as possible. After all, the loop itself is not being used for anything.

I guess if you are using a tent peg as a ground stake, it would be handy to just slip a loop over to hold the line. In that case, you would have a loop tied into both ends of the flying line.

A double ended flying line would also come in handy for attaching two kites together in a train. If the kite closest to ground had a short line out the back, with a large knot, the line to the second kite could just be Lark's Headed on. Quick and simple. 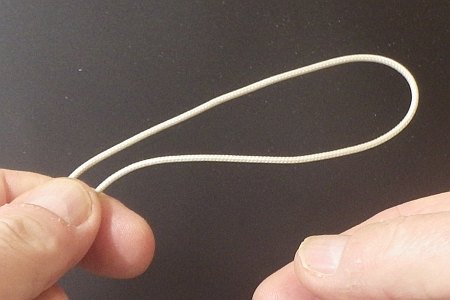 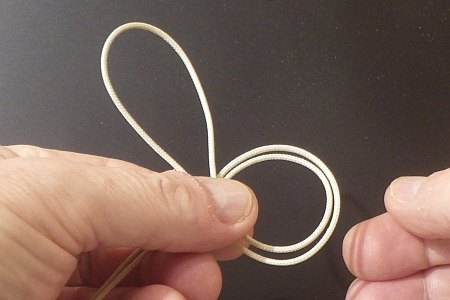 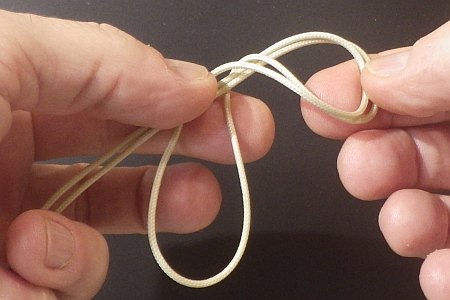 3. Over the back and down 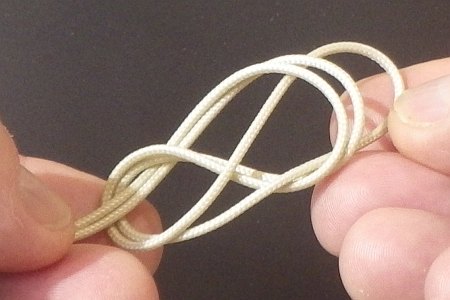 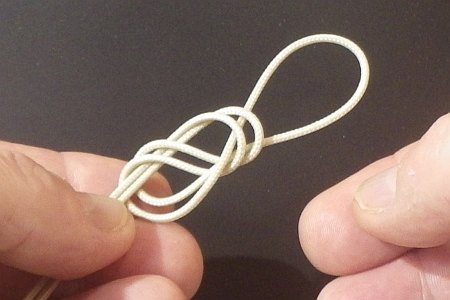 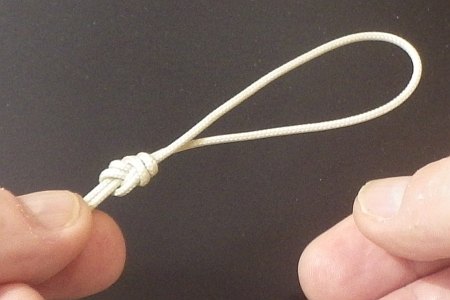 The Figure Eight Loop knot is another loop variation which is about 10% stronger than the Simple Loop, when tied midway along a line. It's a fishing knot and just a little trickier to tie.

Many kite people use this knot near the end of their flying lines, which is then Lark's Headed to a kite's bridle.

I suppose the Figure Eight could be used as a large terminating knot like the Double Loop, but the latter is much quicker and easier to do.

How about a loop tied into both ends of the flying line? Like the Double Loop, the Figure Eight could then be used for tethering a kite to a ground stake. Just by slipping the loop over, the line would be secure as long as the stake was shaped or angled to ensure the loop didn't slip off.

Also, with the right bridles, flying lines with a loop knot on both ends could be used to hitch together a train of kites. 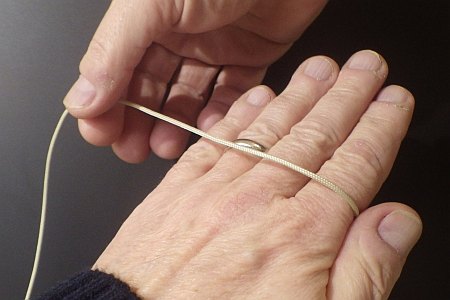 1. Over hand, right to left 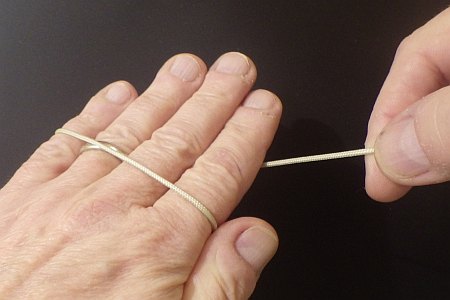 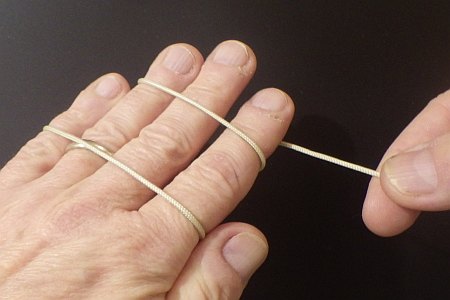 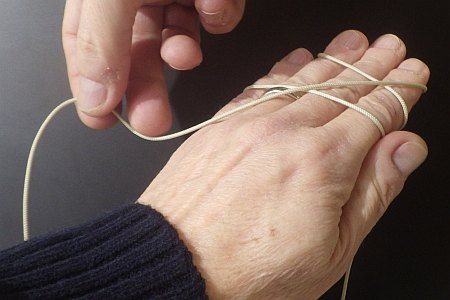 4. Back across both loops 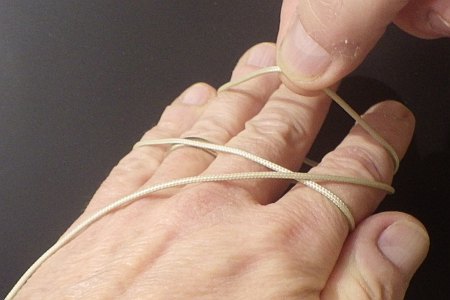 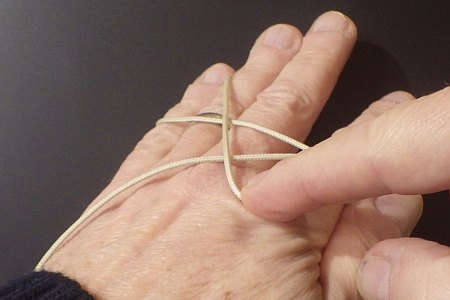 6. Pull down over both strands 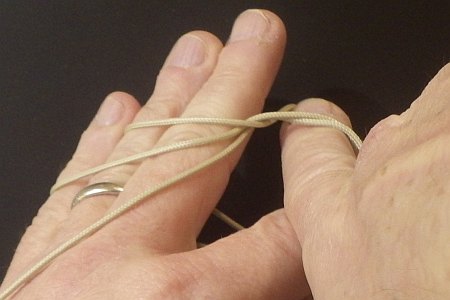 7. Poke through on fingertip 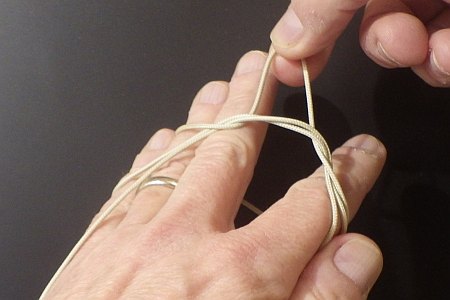 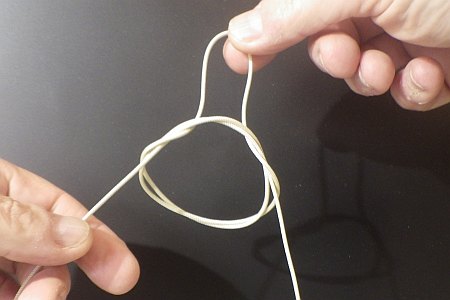 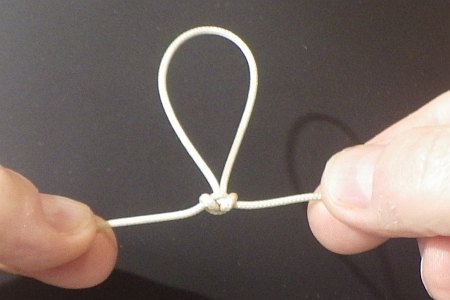 This is a great knot that has tested stronger for the mid-line scenario than all the other loop knots on this page. On top of that, it is easier to untie after taking plenty of strain. Of course, this loop knot is a little trickier to tie. Poke the line through as far as you can, otherwise it tends to slip back again with every movement of your hand.

Once you have the loose knot away from your hand, it's possible to shuffle the line around a bit to get the loop bigger or smaller depending on what you need. It all comes with practice.

This knot is overkill for doing a Lark's Head though; a Simple Loop tested quite strong for that application. A Figure Eight is slightly stronger.